Official support for Netflix and a new remote are part of the package. 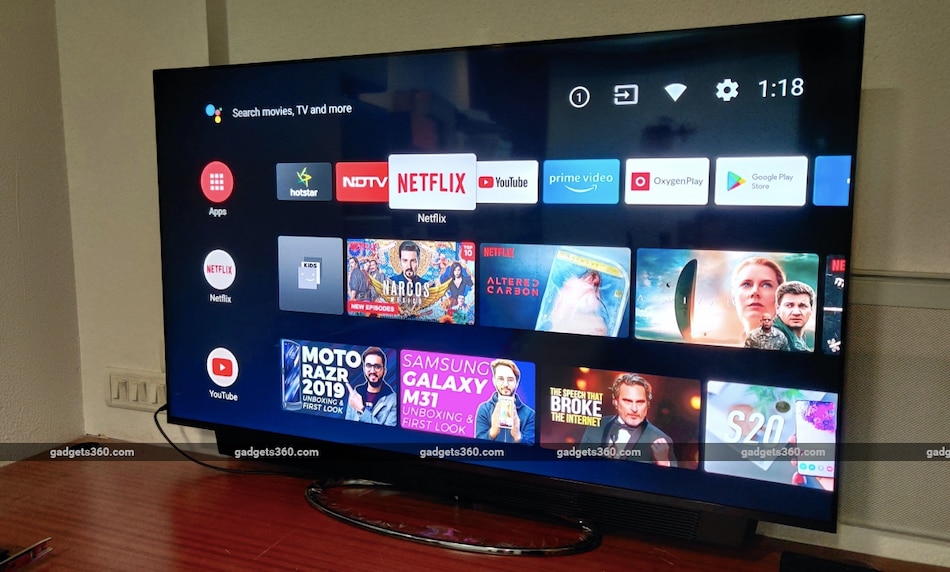 In five years, OnePlus went from selling a single smartphone model online through a much-lambasted invite system, to launching its very first television. The OnePlus TV was launched in September 2019 with two variants - the Q1 (Rs. 69,900) and Q1 Pro (Rs. 99,900). The company has seen significant success in the smartphone space, and hopes to replicate that with its first television products as well.

However, early reviews - including our own - criticised various aspects of the TV, such as its buggy software, the lack of useful buttons on the remote, and issues with HDR10 performance. While we did like the overall package, we still felt it was an unfinished product that had been launched perhaps a bit hurriedly.

As has been the case with its smartphones, OnePlus has released multiple updates for the Q1 and Q1 Pro already. These promise to fix what was incomplete or missing at launch. There's also a small hardware addition now - a new remote with useful new buttons. We decided to re-explore the OnePlus TV a few months after our review to see if the experience is indeed better, and so we spent a few weeks with the Q1 Pro again. Here's what we think.

If there's one thing that OnePlus has time and again proven to be very good at, it's software updates. Three major software updates have been pushed out since the launch of the TV series.

The first was released in October, bringing some urgently needed fixes to the TV shortly after launch. The second, released in December, was a more significant update that brought native support for Netflix. The third update in February brought new content partners as well as bug fixes and optimisations.

Some of these have actually made a difference to the experience, particularly the addition of Netflix and Spotify in the form of purpose-built official apps for the Android TV OS on the OnePlus TV. These are the same as what we've seen on other Android TV devices, and work well on the TV. As expected, Dolby Vision and Dolby Atmos are functional (if your streaming service plans support it), and the user experience was largely flawless for us. The overall Android TV experience was definitely less buggy than before as well.

While we were a little skeptical about the Spotify experience on the TV, we were surprised at how smooth and fun it turned out to be. We were very impressed with the built-in soundbar of the OnePlus TV Q1 Pro when we reviewed it, and it handled our Spotify music collection capably. We found the sound to be on par with that of some of the recent wireless speakers and soundbars we've tested, and indeed Spotify integration gives the TV a whole new use case.

The new remote has useful new buttons, including a hotkey for Netflix

We don't expect hardware changes on a product in the middle of its lifecycle; usually, a successor product is launched a bit sooner than we'd have expected. However, OnePlus has tried to fix its much-criticised remote in a rather unique way: just make a new one. The ‘Netflix' remote, as OnePlus calls it, is different to its predecessor in many ways.

Visually, the biggest change is the fact that it is plastic, unlike the brushed aluminium of the older remote (which is still bundled with the TV even with new purchases). It also runs on regular AAA batteries, a change from the lithium-ion internal battery of the old remote. There are also some new buttons and changes in the button layout on the Netflix remote.

There are now hotkeys for Netflix and YouTube in addition to the Amazon Prime Video button that was already there, a source selector button, and a volume mute button. The volume buttons have been moved to the front of the remote. While the new remote certainly doesn't feel as premium and modern, it's undeniably more useful, functional, and practical.

The new remote comes bundled with all OnePlus TV units currently being sold, so new buyers will get it. If you bought the OnePlus TV earlier, fret not - you are eligible to receive the new Netflix remote for free.

Picture quality is ever so slightly better

We often take claims of ‘optimisations' in software updates with a pinch of salt, but some of these tweaks are visible on the OnePlus TV after the software updates. We found that picture quality was slightly better than before, with colours appearing more accurate, and full-HD content upscaling a bit better.

These improvements are incremental at best though, and we could barely tell any difference when watching 4K and Dolby Vision content. There are still some visible artefacts with rapid motion as was the case before. There have also been no major changes in sound quality.

Is the OnePlus TV a better television now than it was at launch? Yes. Software improvements, a new remote, and small tweaks to performance make this a better product that largely fixes some of the most critical issues that existed at launch. Giving the new remote to both new and existing users at no cost will help OnePlus keep its user base happy.

Is it still worth buying, though, given that there has been no significant price reduction in the months since the launch? Maybe less so than before. The segment has changed significantly since then, particularly thanks to the launch of the Vu Cinema TV range, which is priced at less than half of what the OnePlus TV Q1 goes for.

On paper, the Vu Cinema TV is a close match to the OnePlus TV Q1, with Dolby Vision, 40W sound output, and Android TV with support for all the popular apps and streaming services. What the OnePlus Q1 TV series offers over and above this are its QLED screen, Dolby Atmos certification, and better design. Do these things justify its higher price? We do think so, but there's no denying the value for money you could get with the Vu Cinema TV now.