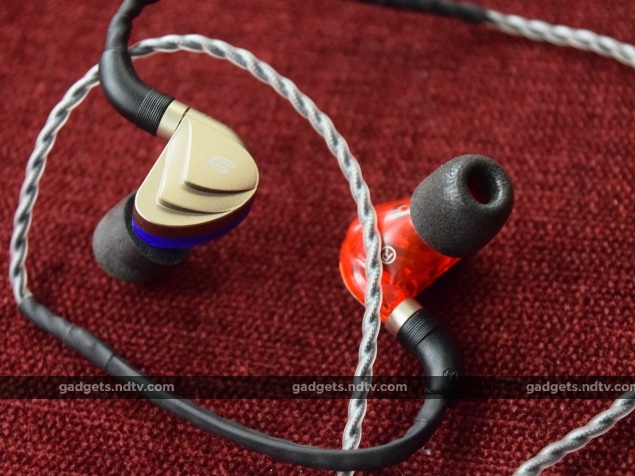 The vast majority of headphones and earphones today use dynamic drivers to push out sound. This involves the use of flexible drivers that move in-and-out to create vibrations that result in the sounds that we hear. Some higher-end models have balanced armature drivers, which use magnetism to deliver powerful sound from within much smaller casings. Armature drivers can also be combined in multiple crossover configurations, where different frequency ranges have dedicated armatures.

Hybrid drivers, on the other hand, combine two or more types of drivers within the same casing. We first explored hybrid technology with the Fidue A73 hybrid in-ears, and then saw it again in the Rock Jaw Kommand. Both these headsets combined a single balanced armature driver with a single dynamic driver in each casing.

The Rs. 24,228 Fidue A83 we're reviewing today is a bit different. Not only does it use a dual-armature configuration, but it also adds a dynamic driver to the equation, making it a triple-driver hybrid. The balanced armature drivers handle the highs and mids, while the dynamic drivers take care of the low-range frequencies. It's an efficient arrangement, designed to ensure cleaner handling of various frequencies, and we aim to find out just how well it performs. 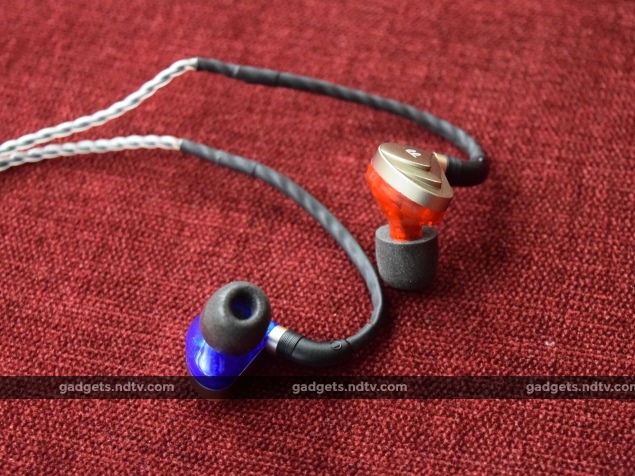 Specifications, design and comfort
The Fidue A83 uses triple-driver hybrid technology, utilising dual-balanced armature drivers along with a 10mm dynamic driver in each earphone. Frequency response ranges from 9-31,000Hz, while sensitivity measures in at 104dB. The standard-length 1.3m cable is silver-plated and oxygen-free. The earphones themselves are detachable from the cable using MMCX connectors. The A83 is purely a pair of earphones, and does not have a microphone or in-line controls.

Impedance is on the low side, at just 11Ohms. This allows the A83 to go loud even when connected to smartphones and portable media players. It's also a slight cause for concern because this makes the headset more susceptible to blowouts, so careful use is advised. Additional amplification is best avoided, as are loud volumes. 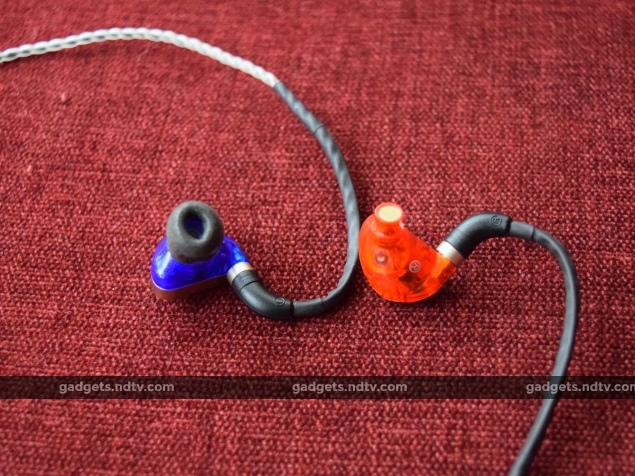 As far as looks go, the Fidue A83 is anything but attractive in our opinion. The casings are a combination of metal and translucent plastic; blue on the left and red on the right. The shape and design of the metal parts of the casings comes off as a bit odd, and the Fidue logos on top don't really help either. On taking off the ear tips, the golden grille looks cheap and completely mismatched with the rest of the casing. Build quality is excellent, however, so if looks aren't too important to you then you have nothing to worry about.

The cable of the Fidue A83 is among the best we've seen. Multiple strands are twisted and double-intertwined to create a durable, tangle-resistant and good-looking cord. After the Y-splitter, the cables become single-intertwined and have an additional layer of plastic sheathing on them. The last portion of the cable curves to form ear hooks which end in MMCX connectors. There is a bit of flex to the ear hooks, but it isn't a lot and they're essentially rigid in shape. The Y-splitter and 3.5mm plug are metal and finished similarly to the metal part of the casing. 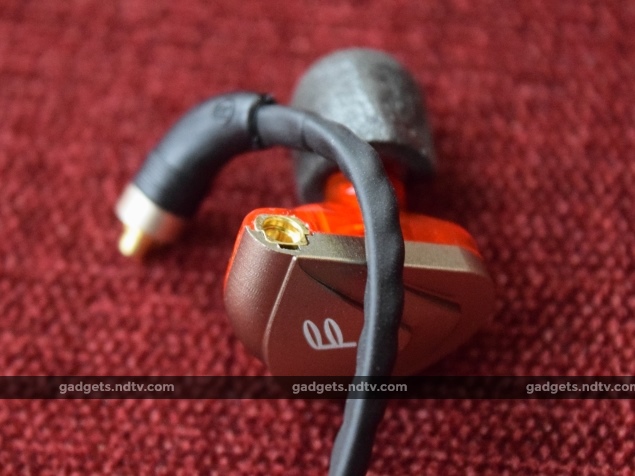 Fit and comfort is unfortunately a bit iffy with the Fidue A83. Although a decent number of ear tips have been included (including double-flanged and foam tips), the general fit is a bit loose and unsecure. The ear hooks don't fit too well either, and the casings themselves stick out too much to sit securely on the outer ear. Furthermore, unless the earphones are perfectly positioned, the sound is adversely affected. Even a small amount of movement will impact the sonic performance negatively.

Included in the sales package are a solid plastic carry-case, a flight adapter, a 6.3mm adapter, and a total of six pairs of ear tips. Although that might seem like a lot of accessories, this variety of add-ons is common and expected at this price level. 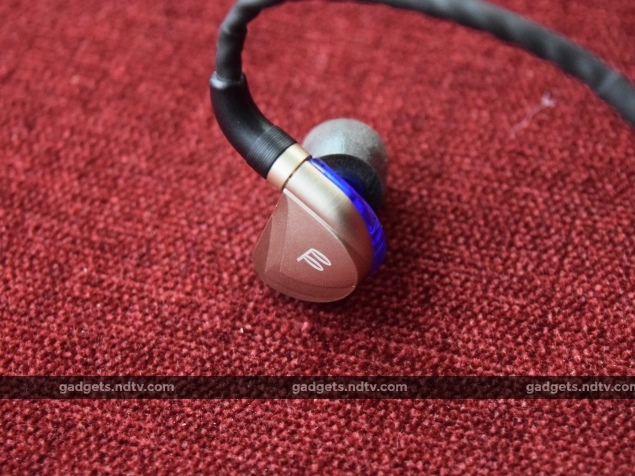 Performance
We tested the Fidue A83 with our reference Fiio X1 high-resolution audio player, an Android smartphone, and a Windows 7 laptop. Focus tracks for the review were Alex Wilson's Show Me, The Verve's Bittersweet Symphony, and The Who's Baba O'Riley. Straight out the box, we were unimpressed with the sound, but a few hours of run-in produced far better results. Things improved once the drivers had flexed and opened up sufficiently.

We started with Show Me, a salsa classic with a cheerful, busy rhythm and plenty of elements to test the Fidue's handling of detail. Although the sound lacked the drive and attack of the Kommand, it certainly did not skimp on detail and tonality. The sonic signature offered by the A83 is more neutral and balanced across the range, while retaining the natural boost in imaging and soundstaging that hybrid technology offers. Separation of elements is particularly evident, since there are three distinct drivers firing at any given time. The individual drum beats and the gentle piano tune felt distinguishable and real, without muddying any other elements in the track. 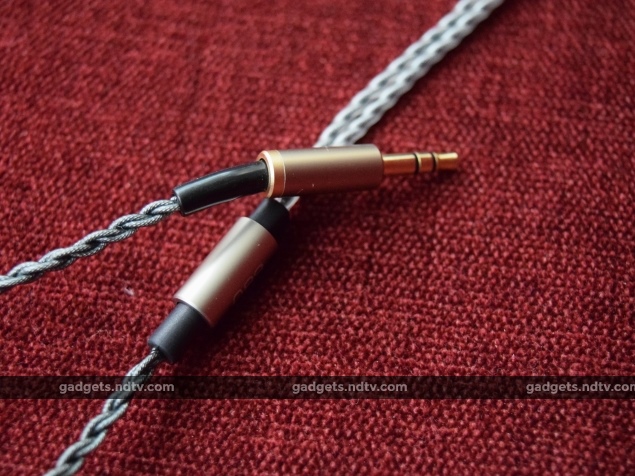 Moving on to Bittersweet Symphony revealed the tonal balance of the Fidue A83. Although this is a sound that may seem less exciting than what we heard on the Fidue A73 and Rock Jaw Kommand, it's much closer to audiophile-grade sound than anything we've heard before. There's just a hint of thump in the bass and sparkle in the treble, and getting the tone right is clearly the focus of the A83. No single element is allowed to outshine another, and having three separate drivers for the three divisions of the range ensures that.

Finally, we listened to Baba O'Riley with the volume turned up. The low-impedance and dedicated drivers allow the Fidue A83 to achieve much higher volumes and levels of power than most other earphones we've had a chance to listen to. Coupled with the detail and imaging, this creates a level of immersiveness that is unmatched at any other price level. Although the lack of excitement and colour is missed, the neutrality and tonal integrity of the A83 makes it a formidable pair of in-ears. 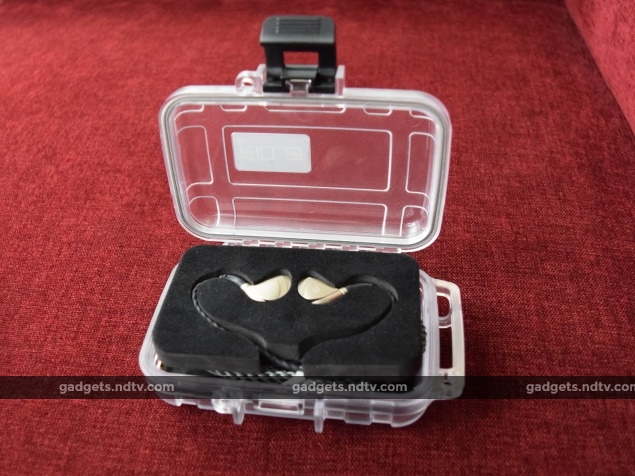 Verdict
We've had a decent amount of exposure to hybrid in-ears of late, and we're convinced that it's the way forward for earphones. Hybrid drivers make for an entertaining sound that is full of body, detail, and tonal balance. In the case of the dual-driver hybrids we've tested, we heard all of the above at slightly lower levels, along with plenty of excitement and drive.

However, the triple-driver hybrid Fidue A83 isn't quite the same as the Rock Jaw Kommand and Fidue A73. It's much more detailed, balanced, and capable of delivering audiophile-grade sound. However, this level of tonality and detail comes at a price - the Fidue A83, while exciting and driven in its own right, doesn't quite match up to its dual-driver competitors in terms of pure adrenaline. The three drivers working in tandem simply do not allow one to shine or punch above the others, instead sharing the duties equally and responsibly between them.

If absolute neutrality, balance and tonal superiority are what you seek, not much can match up to the Fidue A83. If you're looking for excitement along with decent levels of all of the above qualities, you'd do better investing in either the Fidue A73 or Rock Jaw Kommand.This is no small price to pay, but the Fidue A83 is the surest way to in-ear audiophile-grade sonic performance. It's available now through hifinage.com.