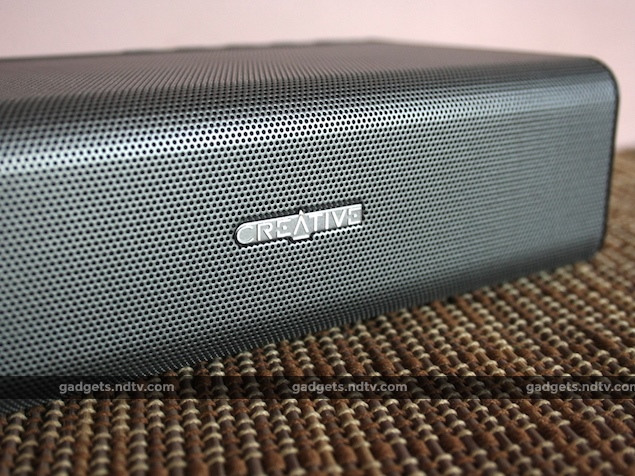 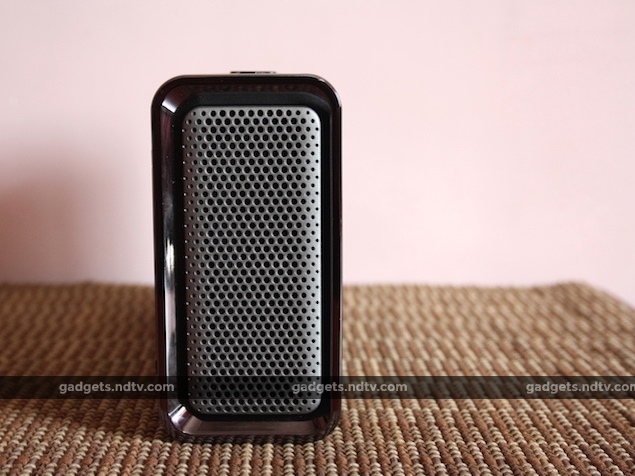 Design, specifications and features
We think Creative's minimalistic design is functional, considering the components inside the small body. In fact, the Sound Blaster Roar, which resembles a transistor radio from the '70s, is a recipient of a Red Dot award for design.

Enclosed in an aluminium chassis with dimensions of 57x202x115mm, the Sound Blaster Roar feels extremely sturdy. A metal mesh wraps across the top and the front. The top, rear and bottom are of a silicon material. All the buttons, ports, slots and light indicators are positioned on this silicon cover. The buttons for the following functions lie on the top: power, Roar, volume up, volume down, and Bluetooth/speakerphone. The Roar and Bluetooth buttons have tiny white LEDs to indicate when their functions are active. On the extreme left of the silicon strip one can find a 'REC' label that lights up when the voice recorder is on, three LEDs that show battery level, and an NFC sensor. 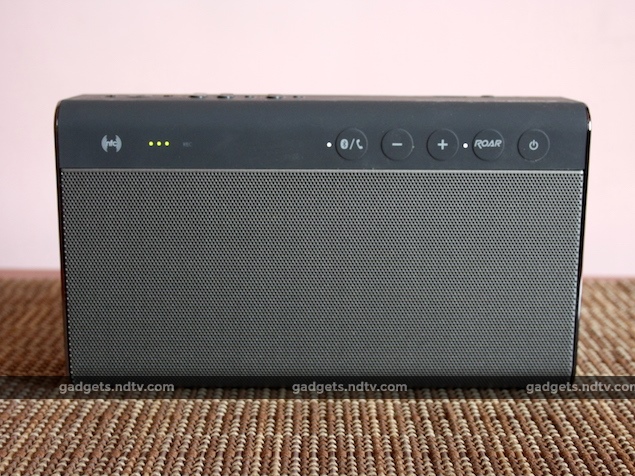 The ports/slots present on the rear include a DC input for charging the speaker, a 3.5mm aux input, USB port to charge other devices, Micro-USB port to connect to a PC/Mac or for charging, and a microSD card slot. The mic mute switch and the record and playback buttons for voice recordings and playback from the microSD card are also on the rear. There are playback control buttons and a switch that lets users determine if they want to shuffle or repeat all the tracks. Creative also provides an option to switch between different Bluetooth link security modes so you can control who is allowed to pair a new device with the Roar. Another button present on the rear lets users activate a siren (long press) or switch on the TerraBass mode (single press). Thankfully, there is a lock switch for the siren.

Even the compact form factor cannot to do much to reduce the 1.1kg weight of the speaker. The Sound Blaster Roar has two amplifiers, one each for high and low frequencies. We'll evaluate how the bi-amplified design actually affects sound-quality in the performance section. 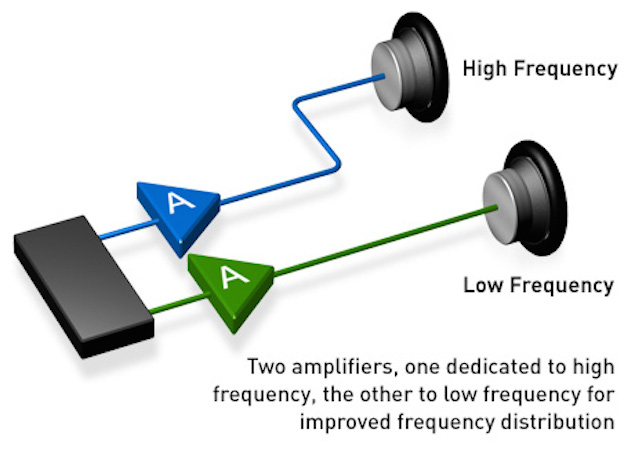 The Sound Blaster Roar connects to devices over Bluetooth 3.0 and has support for the high-quality aptX codec. There is a 6,000mAh battery which is rated to last 8 hours on a single charge. Additionally, this battery can be used to charge smartphones and tablets.

Performance
Connecting to the Sound Blaster Roar over Bluetooth was a cinch. After the initial pairing process, the speaker automatically and immediately detected the same device every time. The Sound Blaster Roar also played back all the tracks on our microSD card without any problem whatsoever, making this a great option for those who don't want to drain the battery life of their smartphone/tablet by connecting over Bluetooth. One problem we faced constantly was that the Sound Blaster Roar skipped playback quite a few times. We are unsure if this was actually an issue with the Bluetooth connection or a specific problem with our review unit.

We tested the Sound Blaster Roar with an iPhone 5c, Motorola Moto G, Macbook Air and Sony Playstation Vita. Only the Macbook Air supports the aptX codec, and the difference in sound quality is immediately perceptible. In any case, we are really glad to report that the Creative has done a wonderful job with the sound signature of the Sound Blaster Roar; it is rich, full and has a fairly wide soundstage.

In contrast to most speakers on the market today, this one is not really a bass monster. In fact in Jai Paul's BTSTU, our go-to song for testing the sub-bass performance of any audio gear, we noticed that Sound Blaster Roar couldn't do much justice to the portions that are dominated by the electronically generated sub-bass sounds. On the other hand, the mids and the treble are punchy. The Foo Fighters' punk rock brilliance in their song Walk comes to life with the forward-sounding Sound Blaster Roar. Pop and classical music sound great too. 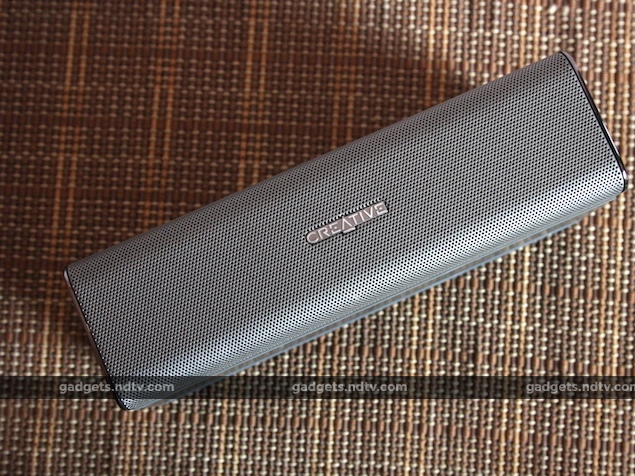 In our testing, we noticed that activating the 'Roar' option only increased decibel levels, and crackled a bit at the highest volume level. On the other hand, the Tera Bass feature works well in improving bass performance at low volumes. One problem that persists thanks to the nature of one-piece Bluetooth speakers is that the sound is unidirectional.

One area where the Sound Blaster Roar really shines is when watching movies. The sound coming out of the speaker is really immersive and transports you immediately into the thick of the action. Speakerphone quality is not too bad but we noticed that the voice quality on our end dropped drastically if we moved away from the speaker.

The Sound Blaster Roar's performance can be enhanced by connecting it to a PC/Mac using a Micro-USB cable. There is a corresponding Sound Blaster Control Panel that can be used to add some creative sound effects as well.

The 6,000mAh battery lasted 7 hours and 3 minutes, which is below Creative's claim of an 8 hour battery life. Also interestingly, the Sound Blaster Roar reduced its decibel level by quite a bit once its battery level dropped below a pre-defined threshold. There is no way to override this feature that activates itself automatically. 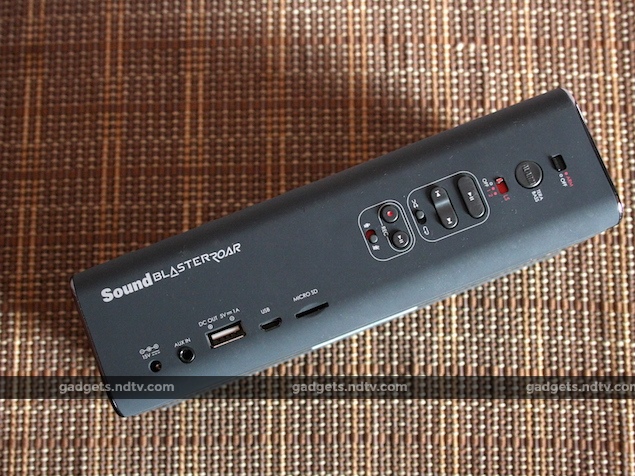 Verdict
When Creative decided to go against Bose with a vengeance, we were skeptical. However, the Sound Blaster Roar managed to change our perception with its stellar performance - so much so that this Bluetooth speaker is our favourite Creative audio product in a very long time. It has a full and rich sound which has been sorely lacking in most of the Bluetooth speakers we've tested in the past. Only the Bose SoundLink Mini has a sound signature that can compete with that of the Sound Blaster Roar.