Audio Technica ATH-M70x Review: The Successor to a Champion 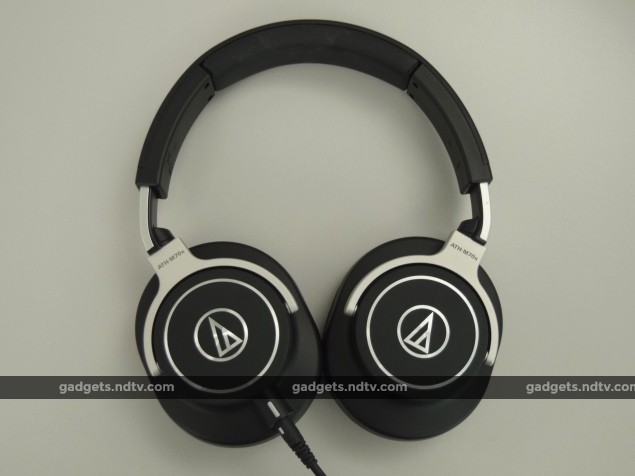 For headphone enthusiasts and people with even the slightest idea of the happenings of the headphone industry, Audio Technica is a big name. It produces a wide range of headphones and earphones at various price points, and its wildly popular M-series has achieved cult status. The former flagship of the range, the Audio Technica ATH-M50x, is still an instant recommendation in its price bracket.

It is for these reasons that we've been looking forward to reviewing the Rs. 22,999 Audio Technica ATH-M70x. The Japanese headphone manufacturer's 'M' series of studio monitors has been targeted at professional users, although a lot of personal audio users have also been opting for these models. Does the ATH-M70x have what it takes to replicate the success of the ATH-M50x? Read on to find out. 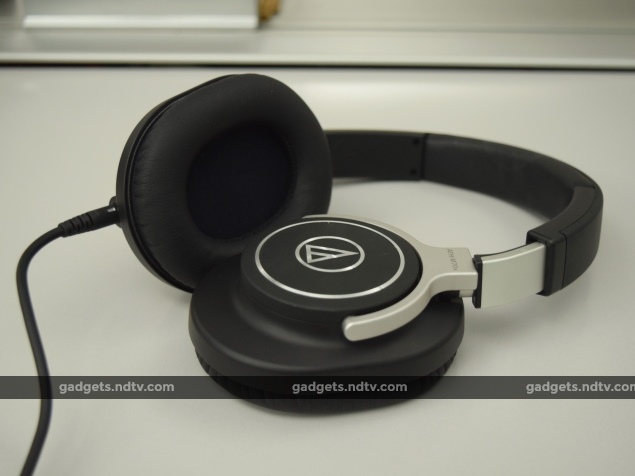 Specifications, design and features
The Audio Technica ATH-M70x as a closed-back design and features 45mm dynamic drivers. It has a frequency response range of 5-40,000Hz, with a sensitivity of 97dB and an impedance of 35Ohms. Human ears cannot hear beyond 20,000Hz, so it seems unnecessary for headphones to go above that. However, the ATH-M70x is said to trigger your senses with the high frequencies, as you can still perceive them even if you can't actually hear them.

The headset weighs 280g without the cable and connector, and is designed to be circumaural. Accessories included in the box include a hard carry case, a small pouch for cables that fits within the carry case, and a screw-on 6.3mm adapter. Three detachable cables are included as well. None of cables have in-line remotes or microphones. 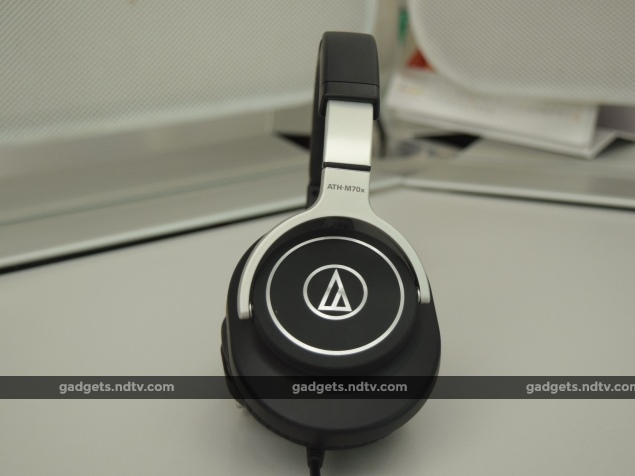 Whether it's the entry-level ATH-M20x or the flagship ATH-M70x, Audio Technica has kept styling uniform across the range. The shape and design of the driver casing is almost identical to the rest of the 'M' series, retaining the angled design. The key differences are the narrower headband and redesigned folding mechanism. The large ATH-M70x headphones do not fold in anymore; the ear cups turn inwards for storage instead. The hard carry case is large and sturdy enough to store it safely along with the cables, but this can be an issue for portability.

Thanks to a liberal use of metal in the Audio Technica ATH-M70x, build quality is superb. A portion of the back of the ear cups and the inner skeleton of the headband are entirely metallic. A portion of the back casing and the outer frame of the headband are plastic, but sturdy nonetheless. The metal parts have a dull matte finish to match the plastic bits. Unfortunately, this makes the entire headset look plasticky and a lot cheaper than it really is. We'd have preferred more authentic metallic finish on the ATH-M70x, which would have given it a more premium look. 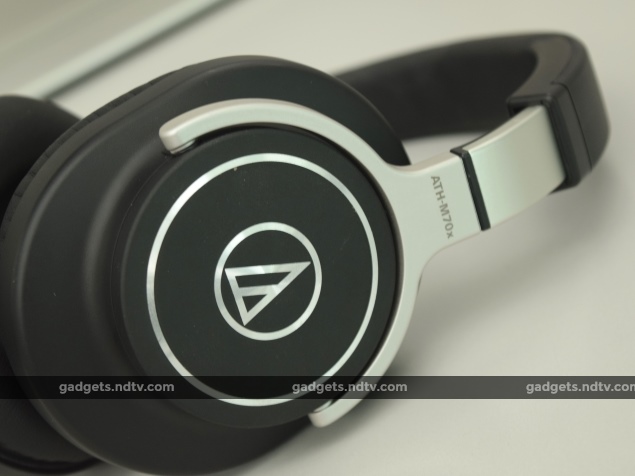 There is soft foam padding on the ear cups as well as on the underside of the headband. The ear cups completely surround you ears, and fit is fantastic. Apart from the typical heat issues that your ears will face after long listening sessions, there are no complaints against the comfort and fit of the ATH-M70x.

The box includes a 1.2m straight cable, a 3m straight cable and a 1.2-3m coiled cable. All of them have 3.5mm pins, but there's also a screw-on 6.3mm adapter which can be used with the coiled and 3m straight cable. The smaller one does not have the required screw threads so is most suitable for use with portable devices while moving around. Allthree cables are coated in thick rubber, which gives them excellent durability. Furthermore, the coiled one will take a lot of strain thanks to its elasticity.

Another great bit of design is the locking mechanism for the cables. Once you plug any of them into the socket on the left driver casing, a small turn will lock it in place and prevent it from being removed until it is turned back to the unlock position. This ensures that your headphones and cables will remain in good condition even if your usage is a bit rough. 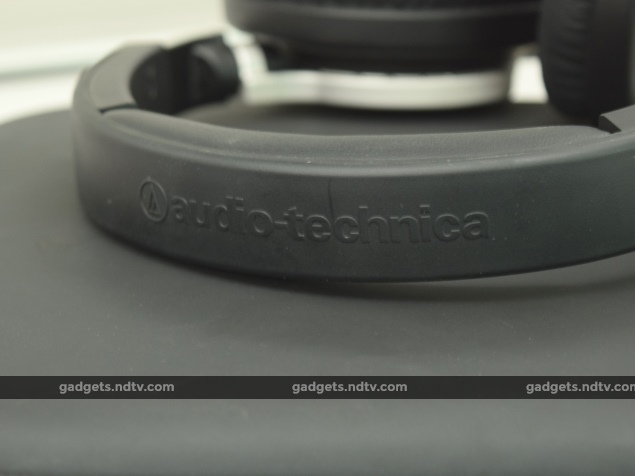 Performance
While testing the performance of the Audio Technica ATH-M70x, we used our reference Fiio X1 high resolution audio player, a Fiio X3 (second generation), an Android smartphone and a Windows laptop. Focus tracks for the review were Enigma's I Love You.. I'll Kill You and Bonobo's Jets in 16/44.1 FLAC; London Grammar's Hey Now in Apple Lossless (M4A); and Gotye's State Of The Art in 320kbps MP3.

With an impedance of 35Ohms, the ATH-M70x can be used with pretty much any source equipment, and it's driven just fine by a smartphone. However, we found far better results when we used it with our Fiio X1, as well as a Fiio X3 (second generation) that we're currently testing. The higher quality amplification by the Fiio X3 did bring more out of the Audio Technica headphones, and we would always recommend using a decent amplifier.

We started with I Love You... I'll Kill You, a track strong in instrumentals and with a heavy dose of mid-range frequencies. The Audio Technica ATH-M70x did a fine job with reproduction of frequencies, especially in the mid-range. Highs felt a bit sharp at times, but were usually calculated and comfortable. Lows on the other hand were a bit too subdued for our tastes, but resonated well nonetheless. On the whole, the response curve felt more or less flat, and so we see that Audio Technica has stuck to the focus on neutrality and accuracy that the 'M' series is known for. 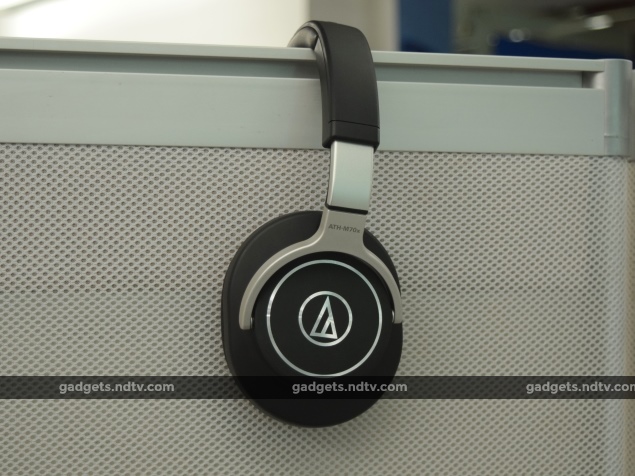 We then moved on to Jets, a lounge track with busy beats and lots of instrumental elements. Bass response was properly put to the test here, and we liked the gentle thump that the ATH-M70x produced. It never felt overbearing, and always allowed the mids and highs to shine through. Similarly, treble response at the top was gentle and in control. This remains in line with the neutral character of the headphones.

Hey Now unleashed the revealing and open character of the Audio Technica ATH-M70x. Stereo separation and soundstaging was at its finest, especially since this particular track is in M4A format and is one of the best digital audio files we have in our bank. Even the faintest elements could be heard and placed on a virtual soundstage with remarkable accuracy.

Finally, we listened to State Of The Art, a compressed MP3 file, on all our source devices. Naturally, it sounded best on the Fiio X3, which brought out the best in the Audio Technica ATH-M70x. This is an aggressive, driven track with lots of synthesizer elements. The Audio Technica ATH-M70x showed just how immersive and driven it can be. With just the right amount of low frequency drive and bass response, it showcased its talent with being true to the recording. There was also fluidity in the sound, as it moved across the incredibly wide sound stage. 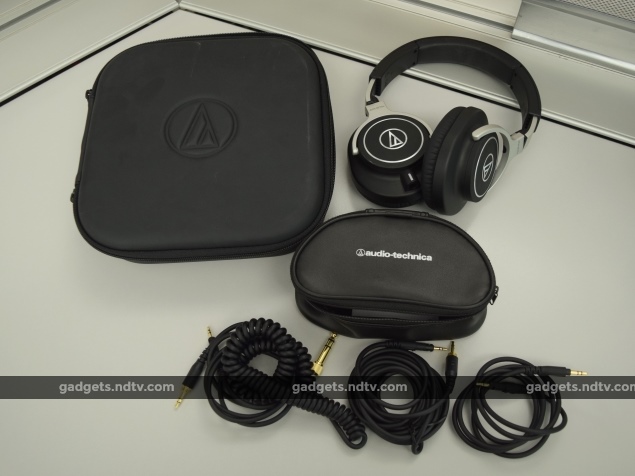 Verdict
Audio Technica has always promoted its 'M' series of headphones as studio monitors, which means that they have to be neutral and accurate, colouring the sound as little as possible. The ATH-M50x is known for its remarkable accuracy and neutrality, and has earned a reputation as one of the best all-round pairs of headphones around, used professionally and personally the world over. The ATH-M70x has managed to outdo the ATH-M50x, producing a similarly neutral and accurate sound, but adding to it with immersiveness, detail and comfort.

However, the ATH-M70x is considerably more expensive while offering a sound that is only incrementally better than the ATH-M50x. At Rs. 22,999, it costs more than twice as much as what you'd pay for the M50x, and in our opinion, doesn't offer enough value to be considered a true superior. However, if you want a pair of studio monitors that live up to their name and reputation, and you have the spending power, look no further. The Audio Technica ATH-M70x is easily the most accurate and immersive pair of headphones you can buy for under Rs. 40,000.

Shift Key 'Fix', iMessage Improvements, and Other Changes That iOS 9 Is Tipped to Bring
OnePlus to 'Shake Up the Industry' on Monday, OnePlus Two Launch Expected