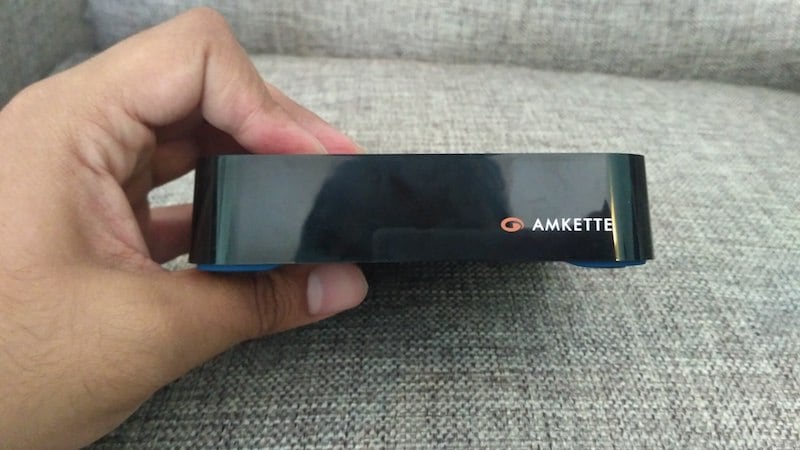 In the five years since the launch of the Amkette Evo TV, a lot has changed in India - although the average Internet speeds in India remain abysmal, more people now have access to faster connections with higher transfer limits, and streaming media is actually quite feasible, where even five years ago you were better off watching media stored on local storage.

With a growing  number  of streaming  video  options, a lot of people are interested in finding out about ways of getting content that's on their phones or computers to the television screen, and while dongles such as the Chromecast probably make up the bulk of devices people are using, Smart TVs, and other smart boxes like the Apple TV are also slowly catching on.

We used the EvoTV 2 4K for a little over a week to see how it measures up in a far more competitive world than its predecessors faced.

Amkette EvoTV 2 4K Design
It's been five years since the first EvoTV rolled around, but looking at the latest set-top box, you'd be hard pressed to tell exactly what has changed at first glance. There are small tweaks to the overall design, which are welcome - the remote, for example, now comes with a toggle button for the air-mouse instead of a touch-sensitive strip at the back.

Although the original design was a lot "cooler", for want of a better word, this new design is much more practical. The same can be said for the redesigned button layout. However, compared to an Apple TV or Amazon Fire TV (the latter is not for sale in India yet), the EvoTV looks boxy, and feels poorly put together.

This comes through in the small details - for example, the EvoTV remote comes with a dongle that you have to attach to the set top box. This might make it easier to swap out a faulty unit, but surely the company could have come up with a better pairing solution? What's more, after you load up the remote with batteries, give it a shake and you'll feel a slight amount of movement - it doesn't feel fully solid in your hands. The power adaptor is a large and ugly looking piece of hardware, and its cord is painfully short.

Amkette EvoTV 2 4K features and specifications
The Amkette EvoTV 2 4K is running Android Marshmallow, skinned to be easy to use on the big screen. The result looks a little like Windows' 'Modern' or 'Metro' style, actually, and this means that you have big bright tiles to click on which is helpful if you're trying to use the EvoTV's air-mouse to navigate. It is a slightly refined version of the UI Amkette used on previous models, but if you've used on before, it will be familiar enough.

It comes with some of the major streaming services pre-loaded: on starting up the app, we saw Hotstar, Amazon Prime Video, Netflix, and YouTube already there, and you have access to Google Play to install any services that Amkette may have missed.

Amkette also installs Kodi on these devices. Kodi, formerly XBMC, is one of our favourite tools for managing movies. It can automatically download metadata, subtitles, lyrics, automatically organise TV shows into seasons and even sort movies by genre or the year they released in or the actors starring in them. A huge range of free plug-ins lets you add a lot of functionality to the app as well.

Apart from the various video services, it also comes with Chrome installed, so you can browse the Web, read Gadgets 360 articles, or just about anything else. On its website, Amkette even highlights that you can plug in a webcam using the USB ports on the EvoTV, and use it for videoconferencing, or download the Office app, and plug in a keyboard and mouse to turn the EvoTV into an impromptu workspace.

Like we mentioned earlier, the EvoTV 2 4K runs a skin on Android 6.0.1 Marshmallow, and comes with 8GB of internal storage which is expandable up to 128GB. The streaming box comes with 1GB of DDR3 RAM. It is powered with an octa-core 64-bit CPU and ARM Mali 450 GPU. In terms of connectivity options, it has four USB ports, Wi-Fi, Bluetooth 4.0, and an Ethernet port.

Amkette EvoTV 2 4K performance and usability
The new EvoTV advertises its 4K playback capability. This is something that it actually delivers on - we tested this using demo 4K clips we downloaded, which were loaded one-by-one to the internal storage of the EvoTV, and viewed them on a 24-inch UHD monitor.

The playback happened smoothly with no clearly discernible visual errors or slowdowns, though in a couple of instances, loading the videos caused a crash to the home screen. Trying a second time worked, but this was actually a common problem with a number of apps.

Since you've got the run of Android apps to choose from on the Amkette EvoTV 2 4K, playing any kind of video was easy - you can install your favourite tools such as MXPlayer or VLC and use whatever you're familiar with. The downside is that you're stuck using the air mouse, which feels fairly cumbersome. It's better to plug in a wireless mouse and use that, though even this isn't as convenient as using the remote on something like the Amazon Fire TV. This is largely down to the fact that the UI in most apps is not optimised for the big screen.

When you load the YouTube app, or the Netflix app, for example, you get the smartphone version of these apps which is also clearly designed for touch interactions, instead of the smart TV versions of these apps, which are meant to be used with a remote. The EvoTV takes time to launch YouTube and simple things like making a video full-screen can cause it to freeze for a while, even crashing the app itself at times. This is frustrating, since these are the same versions of the apps that work fine on phones, and they are running on what is, essentially, phone hardware.

Overall, the Amkette EvoTV 2 4K feels slow. The hardware specifications, particularly the RAM, put it behind many budget-friendly devices that you are getting now - perhaps no surprise given how quickly phone hardware has improved.

Kodi itself presents the best experience of the bunch. It works well with the direction-pad on the remote, and of course, remains a great looking way to showcase and manage your content. On the other hand, using something like Hotstar was excruciating - at times the interface works with the arrows, and at other times, you have to use the mouse, and there are times when the pointer needs to be at a very precise location on the screen or it won't register the button press.

Also funny is that in all the apps running on the EvoTV, we had the option to stream the video to our Chromecast. It's not a problem per se, but it does highlight the downsides of using regular Android apps.

Verdict
The Amazon Fire TV is still not available in India. The Apple TV starts at around twice the price of the Amkette EvoTV 2 4K, which is selling at Rs. 6,499. Compared to other similarly priced devices, the EvoTV is still one of the best looking options we've seen, and one of the most easy to use as well.

Of all the various devices that allow you to get content onto your TV, the EvoTV still remains one of the best when it comes to downloaded, local content. If you have a hard drive full of (legally sourced, of course) movies, then plugging that in to the EvoTV is the most painless way we can suggest to watch all your favourites. If you're not planning on streaming much, go for this.

It falls short - hugely - in terms of streaming when compared to the international favourites, and if you're planning on watching a lot of Netflix, or even YouTube or Hotstar, we'd suggest getting a Chromecast instead. Yes, you'll still have to use your phone to control everything, but it's worth the extra hassle, for a much cleaner, faster interface.

Overall, if you’re spending a lot of time watching downloaded content from your hard drive, you could consider the EvoTV, but otherwise it might be best to hold out for other options.

A Series of Unfortunate Events Review: A Delightful and Zany Journey
HTC U Ultra, U Play With Sense Companion Launched: Release Date and Specifications