Will new iPods be unveiled by Apple today? 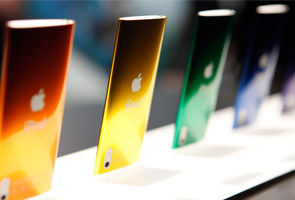 Highlights
Apple Inc. is hosting a music-themed event Wednesday that is likely to yield updated iPods, though the company will not confirm any details.

Apple-watchers also speculate that the company could show off a new version of its Apple TV set-top box or add more music-discovery features to its iTunes music software.

Apple sent an e-mail invitation to members of the media last week with a photo of a guitar, and has unveiled new iPods at similarly timed events in 2008 and 2009.

This time around, analysts are looking for Apple to update its iPod Touch -- a device similar to the iPhone, without the phone or camera capabilities.

The gadget may get a higher-resolution screen, like the recently launched iPhone 4, a faster processor and two cameras, one on the back for taking photos and video and another on the front for video-chatting over Apple's FaceTime program.

Apple may also be rethinking the design of its smaller iPod Nano, according to an analyst.

''Our sources indicate component procurement plans for a new smaller form factor that does not have clickwheel,'' wrote Kaufman Bros. analyst Shaw Wu in a research note last week.

Blogs devoted to Apple rumors have been discussing the possibility of a square touch-screen iPod Nano.

The Cupertino, Calif.-based company may also be updating iTunes with technology from its acquisition of Lala.com, a startup that let people stream music over the Internet and discover new tunes based on what their friends recommended. Apple has not confirmed its plans for Lala's technology.

Finally, Apple may also be ready to update its Apple TV box with improved technology to let people purchase or rent movies and TV shows and stream them over the Internet. The new gadget could cost less than the current $229 price tag.
Comments