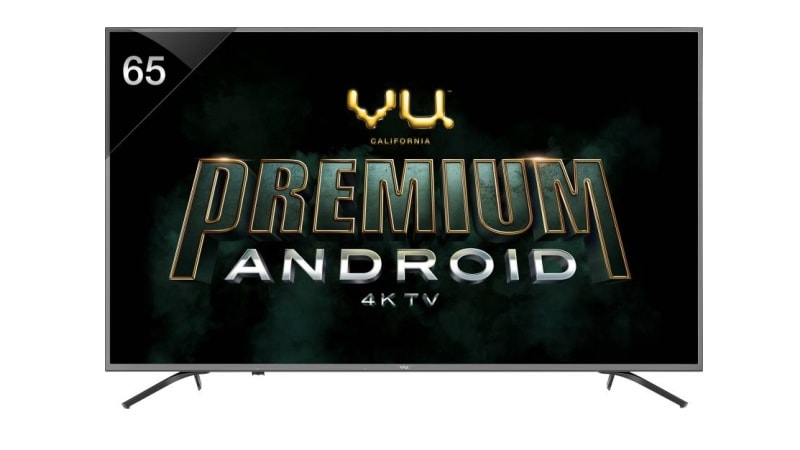 The new range runs on the official Android TV OS

Xiaomi's entry into the consumer TV space in India has had a strong effect on the market, bringing prices down while offering better specifications and features. Today, it's possible to buy a 4K TV at a price that is less than Rs. 1,000 per inch of screen even from well-known brands. One of the first brands to offer competitive pricing and disrupt the TV space was Vu, which has launched its latest range of TVs in India. The Vu Premium Android 4K TV range has been launched in India, priced from Rs. 30,999 onwards. The TVs will be available via both online and offline stores.

The range is available in four size options with 43-inch, 50-inch, 55-inch and 65-inch TVs available. Regardless of the size, the TVs all have 4K-resolution (3840x2160 pixels) LED display panels. There is also support for HDR10 and Dolby Vision for high dynamic range content, along with Dolby audio tuning. The TVs run on the official Android TV platform, with Android 8.0 Oreo, Google Assistant and support for apps through the Google Play Store.

The Vu Premium Android 4K TV range will take on the recently launched Samsung NU6100 range directly, although the pricing is significantly more competitive. The Samsung NU6100 starts at Rs. 41,990 on Flipkart for the 43-inch version, going up to Rs 61,990 for the 55-inch model. Furthermore, a lot of people may prefer the Android TV interface to Samsung's smart TV interface on the NU6100 series.

The Android TV platform was in the news for all the wrong reasons recently, after a privacy issue exposed personal information and images of countless users. The bug was originally discovered on a Vu TV, although it later emerged that the issue was with the Android TV platform itself rather than manufacturer-specific.

Commenting on the latest development, Devita Saraf, Chairman and CEO, Vu TV said, "Vu is on a mission to completely revolutionise the video viewing experience by orchestrating the perfect confluence of innovation and technology. The Premium Android 4K TV range is in line with the same vision, extending to our customers a host of ultramodern features that are also easy on the pocket. We are confident that Vu's Premium Android TVs, much like its predecessors, will emerge as a chart-topper in the market."