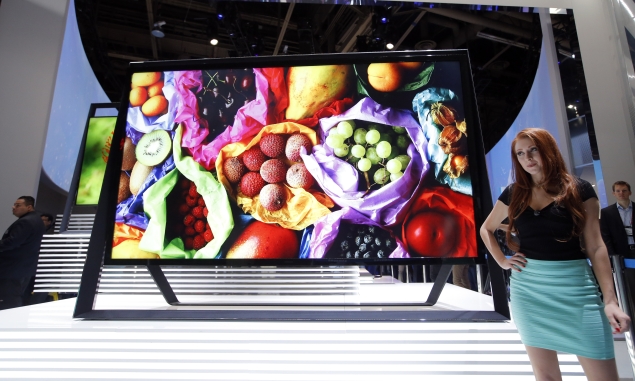 TV makers showing off their new wares at a huge trade fair will seek to dazzle consumers with bigger, bolder displays, and smarter technologies for consumers who want television to be a "multiscreen" experience.

Companies like Samsung, Sony, LG, Sharp and Panasonic showing at the International CES in Las Vegas this week are making a new push for so-called "ultra HD" high definition of 4K, which can provide stunning, lifelike images at a steep price.

Size is on the rise, with many consumers looking at screen measuring 60 inches (152 centimeters or bigger), especially in the United States, according to the industry.

"For US consumers, bigger is absolutely better," said John Herrington of the US division of Japan's Sharp, one of biggest sellers of jumbo TVs in the American market.

The F9500 television is the first in the world to offer this feature, dubbed "multi-view," using screen technology called "organic light-emitting diode" or OLED.

Viewers must wear special 3D glasses, which come with personal speakers built in to deliver the audio, in stereo, directly to them.

But "ultra HD" and other new televisions remain slow to capture the market because of their prices upwards of $10,000, according to a forecast released by the Consumer Electronic Association which showed the segment capturing just five percent of the US market by 2016.

TV makers are still making aggressive moves to get consumers on new TVs, including addressing the issue of a lack of content available in the new format.

Sony, for example, announced plans to launch at 4K video service in the United States this year, and also unveiled plans for more affordable TVs at 55 and 65 inches (140 and 165 cm) in addition to its 84-inch set.

LG said it was the first to launch an OLED set and said it would be selling one in the US market, at a retail price of around $12,000 for a 55-inch model.

Chinese makers are also getting into the high end with sleek new TVs coming from makers such as Haier and TCL, which unveiled a new smart TV which can use the Google 3.0 platform and which will be sold in the United States later this year.

Yet analysts say that consumers are focused on other features of new TVs, including the ability to stream content from their mobile devices to the big screen or vice-versa.

"We are living in an app-dominated world, whether it's on your smartphone, tablet or television," said Kevin Tillmann, senior research analyst at CEA.

"Consumers want access to their apps at all times and they will use whatever device, TVs included, that offer the best and most convenient user experience."

CEA found more than one in five US adults own a smart app-enabled HDTV and 90 percent use the apps available on their displays in some capacity.

"To me, content synchronization is where the magic is. People use an average of five or six devices, and now you can seamlessly have that across these," said Danielle Levitas, consumer tech analyst at IDC.

Levitas said a new initiative being pushed by cable firms is known as "TV everywhere," which enables consumers to take their subscriptions to other devices or even on the road.

"Because of how content is licensed a lot of those experiences are limited to the home," she said. "People want to get that content on a tablet in a remote location, or in a hotel room."

James McQuivey of Forrester said consumers "are focused on tablets" and prepared for a major new TV purchase. And most already have a capable HD set, and would see only marginal improvement with ultra HD.

"Consumers don't need that resolution. There is no way you can discern the difference unless you have a screen the size of a wall," he told AFP.

"And there is no content available in 4K. So anyone who buys a 4K televison is showing they have money to burn."