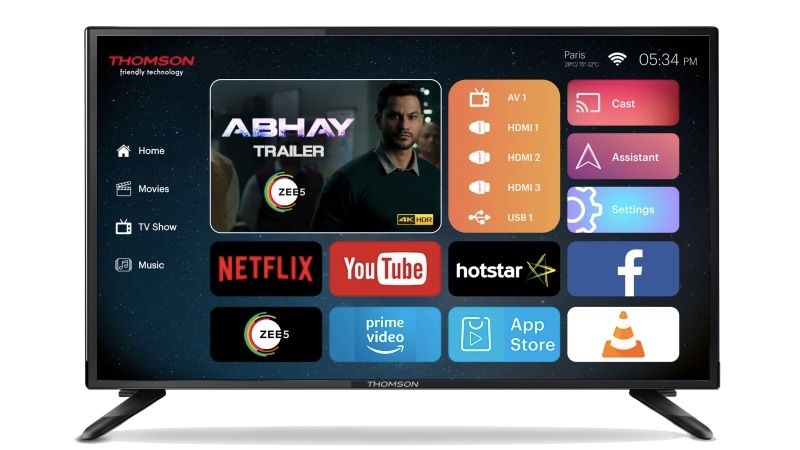 Thomson was once a well-known brand of TVs, but various changes and the rise of Japanese and South Korean companies to the top the TV segment meant that the French company changed its positioning entirely. However, in India, you can still buy Thomson branded TVs, which are manufactured by Noida-based Super Plastronics Pvt. Ltd (SPPL). The company has launched its latest Thomson branded TV in India, the UD9, which is a 40-inch 4K smart TV. The TV is priced at Rs. 20,999, and will go on sale on Flipkart from March 16.

The new Thomson UD9 40-inch variant is touted by the company as India's first 40-inch 4K (3840x2160 pixels) smart TV, and also comes with active HDR10 and 20W audio output. The LED TV has three HDMI ports, two USB ports and a 60Hz standard refresh rate. The smart TV functionality comes with 6 pre-loaded apps, including an official YouTube app which allows playback of 4K videos on the Google-owned video streaming platform. The TV also has a brightness rating of 550 nits.

Additionally, Netflix and Amazon Prime Video also have dedicated apps on the TV, which runs on a custom version of Android 7.1. Video casting is also available on the TV. This is the fourth Thomson branded TV launched in India by SPPL. The company already has 43-inch, 50-inch and 55-inch variants of the Thomson UD9 4K smart TV available through Flipkart, with the top-end variant priced at Rs. 37,999.

The manufacturer SPPL has been in the industry since 1990, and started out as an OEM of CRT and LED TVs. The company also sells and markets Kodak TVs in India. We will be bringing you a review of the Thomson 40-inch UD9 very soon, so stay tuned.