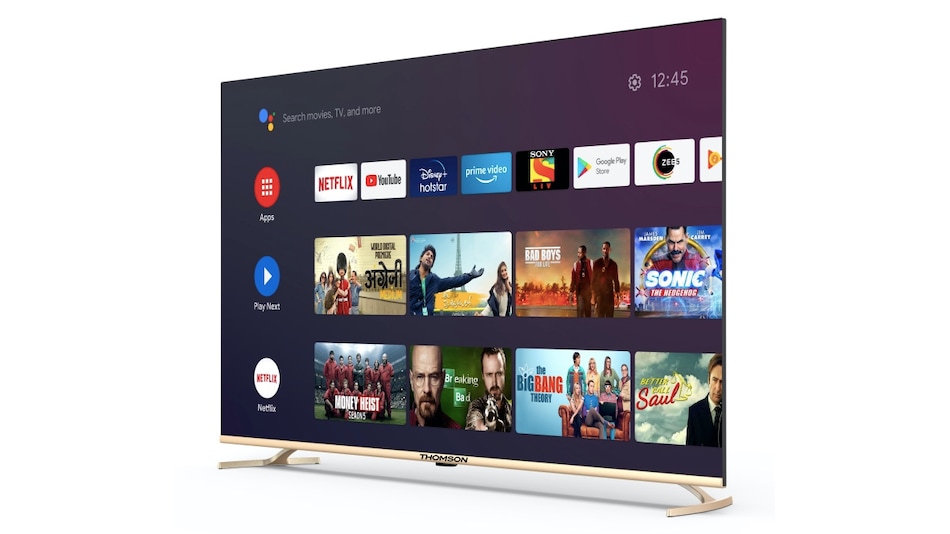 Thomson has launched its latest range in India, the Oath Pro series of Android TV-based televisions. The company's newest Android TV range in India, the Oath Pro series is priced at Rs. 24,999 onwards and is available in three sizes - 43 inches, 55 inches, and 65 inches. All three TVs in the range will have Ultra-HD resolution (3840x2160-pixel) screens, along with support for HDR up to the Dolby Vision format. The televisions will go on sale on Flipkart on July 5.

The Thomson Oath Pro series will run on certified Android TV 9 Pie, giving users access to the Google Play store to download and install apps and games on the TV. Netflix, YouTube, and Amazon Prime Video will be pre-installed on the TV, with hotkeys on the remote for quick access to the streaming services. As is the case on most Android TV devices now, there will also be access to Google Assistant for voice commands.

The Thomson 4K TVs support HDR up to the Dolby Vision standard, along with Bluetooth 5.0 for remote, external audio, and accessory connectivity. The series sports a design with thin bezels, a gold chin, and gold table stands. Apart from there, the TV series also supports Dolby Audio standards, and has IPS LED-LCD display panels.

Although Thomson is originally a French television brand, the brand license in India is held by Noida-based Super Plastronics Private Limited. Originally an original equipment manufacturer of CRT televisions, the company now manufactures flat-panel televisions and home appliances under the Thomson brand name at its plants in India, located in Noida, Una, and Jammu.

The Thomson Oath Pro series goes up against strong competition in the affordable 4K TV segment, but hopes to win over buyers with strong pricing. The 43-inch variant of the Thomson OATH Pro 4K TV is priced at Rs. 24,999, the 55-inch variant retails at Rs. 32,999, and the 65-inch variant goes for Rs. 52,999. All three will be available to buy on Flipkart starting July 3.

The TVs take on existing brands such as Vu and Xiaomi, along with an upcoming series of TVs from OnePlus. The OnePlus TV launch is set for July 2, and is expected to have three variants with prices starting at under Rs. 20,000.

While we expect the affordable variants to not directly compete with the new Thomson Oath Pro series, the higher-end variant is priced at over Rs. 40,000. Thomson hopes that its strong pricing will be enough to win over buyers who were considering picking up the new OnePlus TV, or even options such as the Mi TV 4X or Vu Premium 4K Android TV, both of which are priced similarly to the Thomson Oath Pro series.