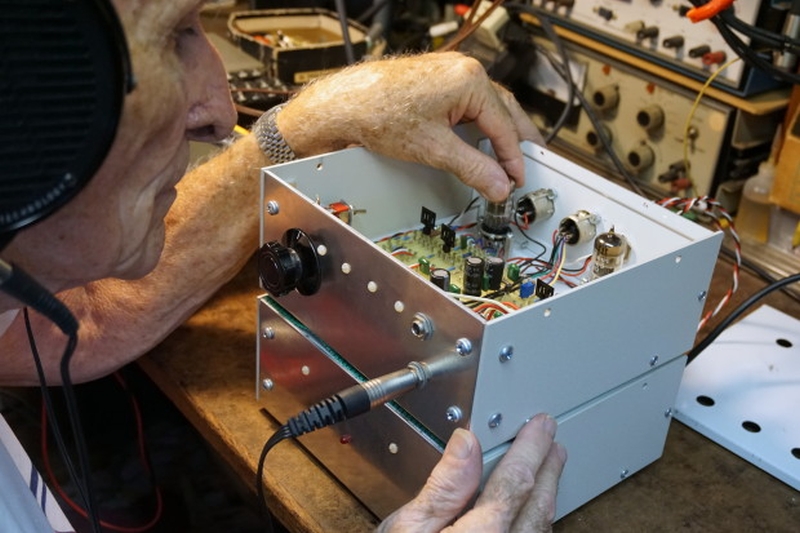 Audio gear can be a contentious issue, and the term audiophile isn't always popular. But there's no denying that there is a huge market for high-end equipment, and some of it is very high quality indeed.

When we were looking for candidates for the latest Kickstarter of the Week, the King Headphone amplifier for Audeze really stood out as the obvious pick.

Designed by Bascom King - the famous audio designer who has worked with high-end brands like Infinity and PS Audio - the King amplifier is made ideally for use with Audeze headphones. These premium headphones will set you back by over one lakh rupees, so you know that the King amplifier isn't going to come cheap.

Audeze is betting that the highest quality parts, along with hybrid design that leads to low impedance, low distortion, and wide frequency response output will make this a compelling product.

On the Indiegogo page, Arnie Nudell, Founder Infinity Systems, Genesis, has written that he has never heard a better amplifier, and he praised it for superb resolution and engaging musicality.

You can see more in the video below:

The King amplifier has nearly hit its $50,000 (Rs. 32.5 lakh) funding goal in one day, and will be accepting funding till November 6. You can back the project for $2,950 (approximately Rs. 1.9 lakh) to get just the amplifier (at a 25 percent discount on the planned retail price), or back it for $3,950 (approximately Rs. 2.5 lakh) to get the amplifier and an Audeze LCD 2 headset - though only five such bundles are on offer.

About Kickstarter of the week

In this weekly column, we look at crowdfunding sites like Indiegogo and Kickstarter, to try and find the coolest new projects from the world of crowdfunding. Sometimes, we've found really interesting projects like the Here Wireless Headphones, that function as an audio equaliser for the real world. At other times, we've come across stuff that's just fun, such as the tobyrich.vegas gaming drones.

Not everything we find here is going to be the next Oculus Rift or Pebble Smartwatch, and of course, with any crowdfunded project there's the risk that it won't actually ship, even after being funded.

Still, if you can afford to set a little money aside, some of these projects can be really cool, and worth backing. To see more from the world of crowdfunding, check out our previous Kickstarter of the Week stories.