The Good Dinosaur Trailer Has an Ice Age Vibe 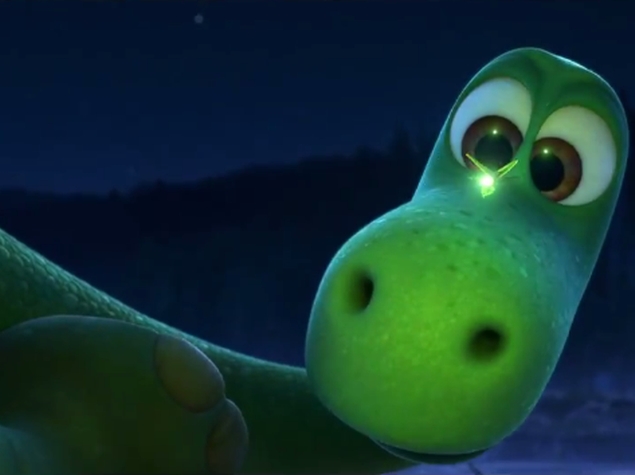 Pixar is often called the Apple of movie studios, because it typically releases only one movie each year, putting quality ahead of quantity. Barring a few exceptions, all of Pixar's offerings have been beautifully crafted, and well appreciated by the audience. Whether it's been building a franchise (like Toy Story) or creating something fresh and unique (like Inside Out), seeing the Pixar tag on a film is usually a pretty good sign that you're in for a good time.

Pixar has now released the trailer for Good Dinosaur, its upcoming "a boy and his dinosaur" movie, which will release in November. The trailer starts by suggesting that the meteor that wiped out all dinosaurs (which not all scientists agree with but we'll leave that alone), missed the Earth. Time passes, and mammals evolve anyway, and this film features a dinosaur making friends with a human boy, and shows the two making some sort of journey together.

In 2015, we're going to get two Pixar movies in the same year for the first time - Inside Out, which released in June, and Good Dinosaur, releasing in November - though the latter was actually supposed to release in Summer 2014.

(Also see: Ten Movies We Geeks Are Looking Forward to in 2015)

The film was originally going to be directed by Bob Peterson, who was also the co-director of Up. However, along the way, the reins were passed to his co-director Peter Sohn, who went on to make some changes to the story of The Good Dinosaur.

The story focuses on Arlo, a young apatosaurus (which is different from a brontosaurus) whose father dies. Lost and without his family, Arlo finds a human cave-boy he names Spot, and makes a pet of it. The rest of the story is about Arlo trying to find his way home, while Spot follows him around and helps him, and the movie apparently includes a Pteranodon, and a Tyrannosaurus family. Based on Arlo though, the dinosaurs look very cartoon-y, and a little out of place against the gorgeous environments that the trailer shows us.

Seeing the trailer unfold gave us a slight Ice Age vibe, but instead of a wacky team of misfits, this looks to be a little more emotional. And of course, that film was all about bringing the human baby back to his tribe, while this film is the opposite - it's about the dinosaur trying to find its own family.

We don't really know much about the movie yet, which is unusual considering it's releasing shortly, but Pixar has been able to make a movie about the feelings your feelings have, that was fun and touching, so we've got high hopes for now.