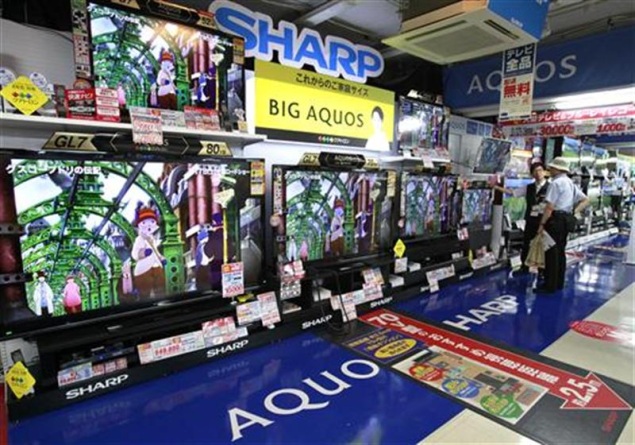 Japan's struggling TV maker Sharp Corp will deliver an asset appraisal report to its banks next month that they will use to judge which business the unprofitable company should sell in return for financial backing, sources at the lenders said.

Sharp, with debt totalling 1.25 trillion yen, is scrambling for money to refinance as much as 360 billion yen of short-term commercial paper and a 200 billion yen convertible bond maturing in September next year. While the company may balk at offloading parts of its business, it will have little choice if banks insist on a fire sale in return for their backing.

Mizuho Financial Group and Mitsubishi UFJ Financial Group will provide several tens of billions of yen in stopgap financing until the report, being compiled by two consultants, including PricewaterhouseCoopers, is ready, the sources said on condition they weren't identified.

So far, Sharp has said it is considering various options to restructure its business in a bid to underpin its finances, without giving details. Its banks may wait until the consultants to deliver their assessment of what Sharp owns, what it is worth, and where its liabilities lie before making specific demands on what it should sell.

"At the moment we have no comment," said Machiko Watanabe, a spokeswoman for PricewaterhouseCoopers.

Like rivals Sony Corp and Panasonic Corp, Sharp has been hammered by waning global TV demand and aggressive overseas competitors led by Samsung Electronics that are grabbing a bigger slice of a shrinking pie.

Sharp, which has lost around $7 billion in market value this year, has warned it would report a 100 billion-yen operating loss this fiscal year, prompting ratings agencies to cut their credit ratings. The company said it will axe 5,000 jobs, about a tenth of its global workforce and its first redundancies in six decades.

The level of funding needed will also depend on how much investment Sharp secures from Taiwanese partner, Hon Hai Precision Industry.

Hon Hai is renegotiating a planned 67 billion-yen investment in Sharp for a 10 percent stake that valued its shares at 550 yen. The stock since has fallen to below 180 yen, prompting Hon Hai to seek a lower price per share and a possible increase in its stake.

Hon Hai wanted 20 percent ownership of its fellow Apple Inc supplier for 200 yen per share, the Nikkei business daily reported on Friday, without saying where it obtained the information.

Sharp's shares were trading 5.4 percent lower on Monday following a 13 percent jump on Friday on a splurge of local media reports of potential asset sales.

Other media outlets said Sharp was asking for more than 100 billion yen for its solar panel plant in Sakai, western Japan, while other reports said the inventor of mechanical pencils may spin off its Kameyama plant, which makes LCD screens for Apple's iPad and latest iPhone.

Sharp's consumer electronics business accounts for almost two-fifths of revenue, with its home appliance business and a printers and cash registers unit making up a tenth of sales each. Its solar panel division is 8 percent of income, with the remainder of sales generated from LCD panels and other components.

The maker of Aquos TVs is mulling the sale of assets including TV assembly plants in Poland, Malaysia and Mexico, and office buildings in Tokyo, a company source told Reuters last week.