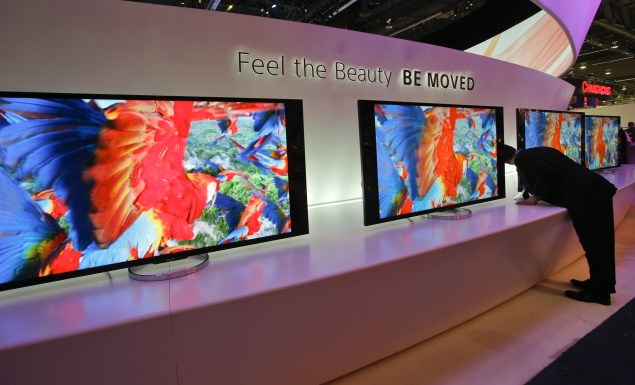 Sony Corp. is finally pressing its advantage as a conglomerate that owns both high-tech gadgets and the content that plays on them by being the only electronics maker to offer ultra-HD TVs and a way to get movies to the new super clear screens.

Ultra-high definition TVs, which quadruple the number of pixels of current high definition technology, have been the talk of the International CES gadget show so far. But only Sony has offered a content solution to go with them.

With 84-inch ultra-HD set it launched in November, Sony threw in a tablet and computer server that has 10 movies preloaded on the device - for $25,000. The movies came from the library of Sony Pictures or its subsidiary Columbia Pictures, like "The Amazing Spider-Man" and "The Karate Kid."

On Monday, Sony unveiled 55-inch and 65-inch ultra-HD sets that will sell this spring for an undisclosed price believed to be below $10,000. The Japanese electronics maker said it would launch a download service this summer in the U.S. so buyers of the smaller sets would have access to movies in the clearer format.

For now, it will offer the same 10 movies from its library for download.

After unveiling the service, Sony CEO Kazuo Hirai told reporters that the ultra-HD movies could be made available to other makers like Samsung or LG later. The company is eyeing coordination with other movie studios, but not immediately.

"That's a key differentiator from a Sony perspective that really speaks to the advantage of what we have in terms of both the electronics business and the content business," he said. "For the time being, that's something we bring exclusively to our customers."

Sony is betting big on ultra-HD, and is a leading supplier of a high-end cameras that shoot in the format, which renders moving images at a resolution of 3,840 pixels wide and 2,160 pixels tall. That is twice the length and width of high definition, resulting in four times as many pixels, or more than 8 million.

The company also makes projectors that show movies in so-called 4K, and Hirai said that anyone who has been to the movies lately has probably experienced it firsthand without realizing it.

Sony representatives said that buyers of its 55-inch and 65-inch TVs may be asked to buy an ultra-HD server separately, although a final decision hadn't been made. It is also unclear how much downloadable movies will cost.

The company said it would offer Blu-ray discs that are mastered in 4K but compressed to fit on a current Blu-ray disc. The TV's embedded technology presents the compressed movie at close to 4K resolution, but not quite as good as when they are played from the 4K media player.

But with all new technologies, there were glitches.

Hirai had an embarrassing moment Monday when he introduced the world's first ultra-HD TV using organic light-emitting diodes (OLED), only to see the screen go blank as the computer running it had an error.

"This revolutionary TV combines the world's largest OLED display with dazzling 4K resolution, including this beautiful ... interface screen," he said, then turned to see a blank screen as chuckles rippled through the crowd.

Later, Hirai looked back at the 56-inch display only to see the error continue.

A Sony staffer rolled the TV further away and Hirai carried on his presentation. He later appeared to be good-natured with journalists.

Hirai said the ultra-HD OLED set is a prototype and didn't announce price or availability.

In the Sony booth after the presentation, other ultra-HD OLED screens played without a problem.

Cloud gaming to spread across 66 million US households by 2017: Report
Samsung, Sony, Sharp and LG betting big on 'ultra-high definition' TVs at CES