Sony Pictures' Amy Pascal to Step Down as Co-Chairman 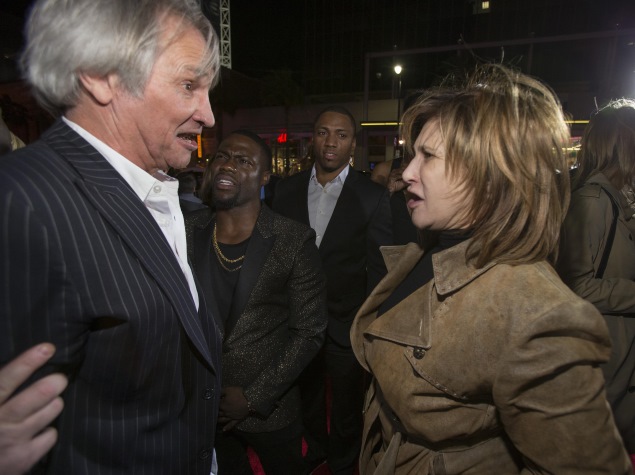 Sony Pictures Entertainment co-chair Amy Pascal, whose embarrassing emails were leaked in a hack attack on the Hollywood studio blamed on North Korea, is stepping down, the company said Thursday.

Pascal - widely regarded as one of the most powerful women in Tinseltown - was forced to apologize in December for the emails, including one which saw her swap racially insensitive jokes about President Barack Obama.

A Sony statement said she would launch a "major new production venture" at the studio, which was rocked by the hacking centered on the controversial North Korea satire "The Interview."

"I have spent almost my entire professional life at Sony Pictures and I am energized to be starting this new chapter based at the company I call home," Pascal said in a company statement.

"I have always wanted to be a producer. (Sony CEO) Michael (Lynton) and I have been talking about this transition for quite some time, and I am grateful to him for giving me the opportunity to pursue my long-held dream and for providing unparalleled support," she added.

"The Interview" was originally scheduled for a Christmas Day release, before Sony became the target of the biggest cyber-attack in US corporate history.

Threats made by hackers prompted Sony to initially cancel the film's theatrical release. It was eventually screened in select art house cinemas, and released on the Internet and via cable TV providers.

Washington blamed North Korea for the hack on Sony - a claim Pyongyang has denied while still strongly condemning the film, which features a fictional plot to assassinate leader Kim Jong-Un.

"The Interview," which had a $44 million budget, has since become Sony's highest-grossing online film ever, reportedly recently passing the $40 million mark on the Internet and other small-screen formats.

Lynton acknowledged the tough times for Sony in recent months, saying: "In recent months, SPE faced some unprecedented challenges, and I am grateful for Amy's resilience and grace during this period."

New venture
The details of Pascal's new venture were due to be announced "shortly," Sony said.

But it said the venture would be her own company, supported by Sony and based at its California headquarters, and will "focus on movies, television and theater."

As part of a four-year agreement, SPE will finance the venture and retain all distribution rights worldwide to films financed, it added.

"Amy's creativity, drive, and bold choices helped define SPE as a studio where talented individuals could take chances and push boundaries in order to deliver outstanding entertainment," he said.

"The studio's legacy is due in large part to Amy's passion for storytelling and love of this industry. I am delighted that Amy will be continuing her association with SPE through this new venture, which capitalizes on her extraordinary talents."

Late last month, Japanese parent company Sony said it had won permission to delay the release of its quarterly earnings report, after the cyber-attack damaged the computer network of its Hollywood film unit.

The Japanese firm said it was asking for the delay because subsidiary SPE would not have time to put together its financial statements.

China to Have Most Robots in World by 2017: Report
Celkon Millennia ME Q54 With 5-Megapixel Front Camera Launched at Rs. 5,555