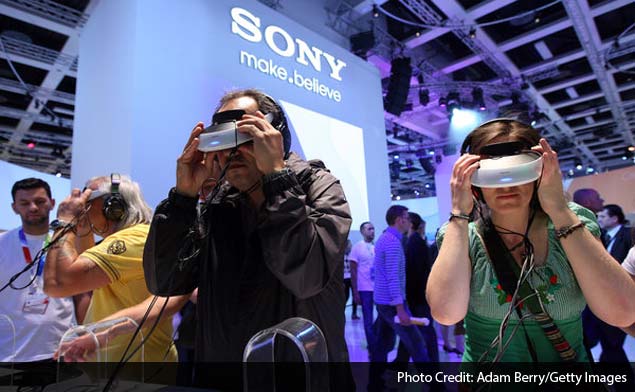 After years of bets gone wrong and lost opportunities, three of Japan's consumer electronics giants are showing some signs of faltering.

In the most dire warning, Sharp forecast on Thursday a 450 billion yen ($5.6 billion) full-year loss and warned that it had "material doubts" about its ability to survive.

On the same day, Panasonic's shares lost a fifth of their value in Tokyo after the company forecast a 765 billion yen ($9.6 billion) annual net loss from write-downs in its solar-power, battery and mobile handset businesses.

And Sony, perhaps the best positioned of the companies, posted a net loss of 15.5 billion yen ($194 million) for the quarter on Thursday and warned of falling sales in almost every product it sells.

"We have a lot of great technology which we want to tap to revive and generate profit, but the company does not have that vitality," Takashi Okuda, Sharp's chief executive, told reporters after the company posted a net loss of 249 billion yen ($3.1 billion) for the three months to September. The loss was far larger than expected.

In a statement, the company said it had a "serious negative operating cash flow" which raised "serious doubts" about its ability to continue as a going concern, and said it was taking steps, including pay cuts, voluntary redundancies and asset sales, to generate cash flow.

While Sharp is in the most serious trouble, the three companies' woes are similar at the core.

All three make good quality, even cutting-edge products but so do their overseas competitors, usually at lower prices. None of the three have managed to generate the brand pizazz of Apple, or the marketing muscle of Samsung Electronics. In addition, a stubbornly strong yen continues to sap their competitiveness, while Japan's territorial dispute with China has hurt sales there.

The scale of the losses is the result of specific missteps, from huge investments in the wrong technologies to a reluctance to exit loss-making businesses. A manufacturing bubble here in the mid-2000s fed partly by an unusually weak currency and Americans flush with cash from rising home prices masked continued weaknesses in their business models and spurred the companies to take big bets that backfired.

When the global financial crisis brought that boom to an end in 2008, the three were saddled with excess capacity, bloated work forces and investments that they could hardly hope to recoup. And their refusal to make a big enough departure from the ways of their glory years is now making a comeback difficult.

"Many investors are longing for reforms that will let all of the pus out," Yuji Fujimori, technology analyst at Barclays Capital in Tokyo, said in a recent note to clients.

Sharp's stumble, in many ways, has been the most humbling. It was the biggest beneficiary of the manufacturing bubble: from 2000 to 2007, its profits jumped 150 percent. Sharp's high-end Aquos liquid-crystal display televisions which it manufactured at state-of-the-art factories in Kameyama, in western Japan were a runaway hit in the nascent flat-panel market. The spinoff Aquos cellphone topped Japanese sales rankings. Sharp's solar batteries also sold briskly, helped by a bubble in green technologies.

The company's success during this period seemed to validate Japan's penchant for manufacturing their most important products in-house. In advertisements, Sharp showed off its cutting-edge factories.

But even before the financial crisis, analysts were warning of an impending crash in prices of flat-panel televisions, which were fast becoming commodities that cheap upstarts could emulate. In 2008, the iPhone made its debut in Japan, the end of an era for Japanese-style cellphones. Chinese upstarts were starting to flood global markets with cheap solar panels and batteries. In consumer electronics, outsourced manufacturing became the norm.

Still, Sharp did not change course. It built a new factory in Sakai, Japan, which could make 6 million large LCD panels a year more than the size of the global market at the time. Sharp missed the smartphone wave, and its cellphone sales in Japan halved from 2007 to 2012. And in late 2011, the solar bubble burst, driving many solar power companies into bankruptcy and Sharp's solar batteries business into the red. The unit has not turned a profit since.

Now, the Kameyama factories no longer make televisions but panels for Apple's iPhones and iPads.

Panasonic, for its part, also bet heavily on plasma televisions in 2003, pouring some 600 billion yen into a series of factories in Amagasaki, not far from Sharp's own plant. It also bet on solar panels and rechargeable batteries, buying Sanyo in 2009.

But with plasma now a fading technology and solar power struggling, Panasonic is saddled with major losses. Last year, it announced that a factory in Amagasaki was closing, less than two years after it opened.

Kazuhiro Tsuga, who took the helm at Panasonic this year, was blunt in describing his company's predicament. "We are among the losers in consumer electronics," he told a news conference on Wednesday. He now promises to shift the company away from money-losing televisions and gadgets.

Of the three, Sony now seems the most prescient. Its executives have preached the power of networks and content since the 1990s, building up a vast catalog of music and movies to lure users to their devices. Sony has also moved to slash costs and jobs and sell off some unprofitable businesses, refocusing the company on digital cameras and imaging technology, video games and mobile devices. This quarter, the sale of its chemical products business, which made materials for LCDs and optical discs, helped alleviate losses. Sony is now making a push into the medical field with an investment in the endoscope maker Olympus.

Internal squabbling has quashed its efforts to marry its hardware and software, however, and it refuses to abandon one of its biggest money-losers, its television business, which has bled red ink for eight consecutive years.

"We intend to hunker down and build a profitable business," Masaru Kato, Sony's chief financial officer, told a news conference Thursday. "And where we can, we will chase new markets."