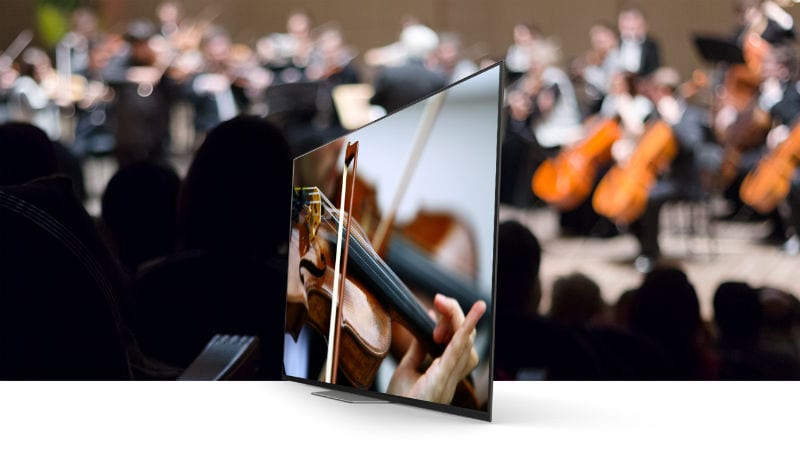 Alongside LG, Panasonic, and Samsung, Sony has entered CES 2018 in Las Vegas with its new 4K HDR TV family that comprises the Bravia A8F OLED and Bravia X900F LCD series. The new range features the company's proprietary 4K HDR Processor X1 Extreme to enable 4K HDR viewing. Also, the latest offerings have Android TV with Google Assistant. The voice-enabled personal assistant was debuted on previous 4K HDR TVs by Sony back in last November. The company also showcased an 85-inch 8K HDR television with a brightness of 10,000 nits at the trade show.

Between the two new Bravia series, the Bravia A8F OLED comes in two models - 65-inch (seen below) and 55-inch. Both have eight million self-illuminating OLED pixels and include Acoustic Surface technology that is touted to enable the screen to emanate sound. Notably, LG is also developing a similar technology, which it calls Crystal Sound OLED. The ultimate aim of making the panel capable of emitting sound seems to help reduce bezels to further extent.

The Sony Bravia X900F LED series, on the other side, comes in 85-inch, 75-inch, 65-inch, 55-inch, and 49-inch display sizes that all are LED-backlit LCD panels. There is X-tended Dynamic Range PRO 6x that is claimed to enhance HDR and non-HDR content by boosting and dimming the backlight levels precisely for each zone of the screen. Also, the TV models have X-Motion Clarity that smoothens fast-moving scenes with no loss in brightness. The Bravia X900F series is specifically designed to match the company's HT-X9000F sound bar.

To make the TV-watching smarter, the Sony Bravia A8F and Bravia X900F series come with Android TV that enables Google Assistant support. You can utilise the presence of Google Assistant to search for your favourite TV shows and movies. Furthermore, Sony has also provided Amazon Alexa and Google Home integration to offer hands-free control to play, pause, fast forward, and rewind tracks on the new TV models, using your voice commands.

Sony hasn't revealed any details about the price and availability of the Bravia A8F and Bravia X900F series. However, it confirmed that both the new Bravia family members will be available for sale through Amazon, Best Buy, and other authorised stores in the US.

Now, we get to the 85-inch 8K HDR television that Sony showed off. The company says it features an image quality superior to its flagship Z9D series, and the X1 Ultimate engine that we see on the Bravia A8F and Bravia X900F in this case is capable of delivering an 8K resolution with an full HDR brightness specification of 10,000 nits.