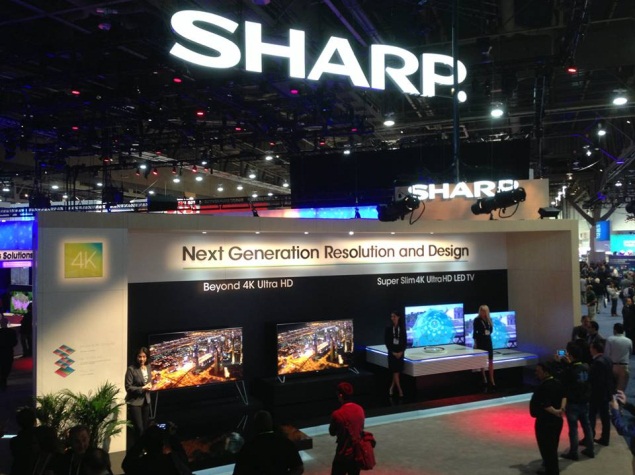 Japanese electronics giant Sharp said Friday its net loss widened in April-June as it struggles through a painful restructuring and weak sales of display screens and smartphones.

The Osaka-based firm reported a JPY 33.98 billion (roughly Rs. 1,757 crores) shortfall in the first fiscal quarter, much more than the JPY 1.79 billion in the same period last year.

However, it kept a target of JPY 80 billion in operating profit on sales of JPY 2.8 trillion for the 12 months through March 2016. It did not give a net profit target, citing uncertain restructuring costs.

Earlier this year, Sharp said it was cutting 10 percent of its 49,000 positions worldwide as part of a turnaround plan intended to keep it afloat after posting a bigger-than-expected $1.86 billion (roughly Rs. 11,938 crores) annual loss.

"Sharp is barely surviving and it is still uncertain if the company turnaround can be carried out as planned there are still many hurdles to clear," said Hiroshi Sakai, chief economist at SMBC Friend Research Centre in Tokyo.

In the latest quarter, Sharp said it was hit by a decline in its electronics business, including slack demand for LCD televisions, smartphones and air purifiers.

The company annnounced Friday it would sell its Mexican TV production business to Chinese electronics company Hisense, which would continue to sell televisions under the Sharp brand.

The once-mighty firm, like rivals Sony and Panasonic, has been working to move past years of gaping deficits, partly caused by steep losses in its television unit, which has been hammered by competition from lower-cost rivals particularly in South Korea and Taiwan.

The embattled Aquos-brand maker has said it would sell the building that houses its Osaka headquarters to raise cash, roll out unspecified pay cuts, and launch a drastic capital reduction plan to wipe away huge losses.

Sharp a major Apple supplier and leader in screens for smartphones and tablets said at the time it would issue JPY 200 billion worth of new shares with no voting rights to a pair of Japanese banks.

The bid for a lifeline from its banks underscored Sharp's desperate situation, as its rivals try to repair their own balance sheets.

On Thursday, Sony said its quarterly profit more than tripled as its PlayStation videogames and smartphone component sales got a lift while Panasonic's operating profit weakened.

However, Panasonic has rebounded more quickly that Sharp or Sony as it focuses less on the consumer products that built its global brand and more on goods sold to other businesses.

Among the changes, Panasonic is pulling the plug on its last remaining TV factory in China owing to the sharp decline in prices.