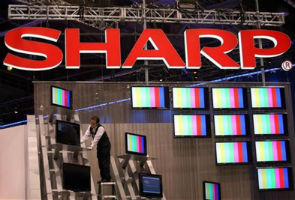 The maker of Aquos TVs will likely post a group net loss of about 100 billion yen for the April-June quarter after $198 million settlement in a U.S. LCD cartel case added to its deficit during the three months, the paper said without citing anyone.

"We are considering various measures to tackle the difficult situation, and will disclose the details when it is finalized," Sharp said in a statement. Its shares fell as much as 5.4 percent in early trading in Tokyo.

The reported deficit for the quarter compares with an smart estimate for a net loss of 87 billion yen calculated by Thomson Reuters from four analysts' forecasts that gives more weight to those whose past predictions have been most accurate.

Sharp, which posted a record net loss of 376 billion yen in the year ended March 31, has been hammered by a drop in demand for its TVs that has left it with a glut of LCD panels produced by its main plant in Sakai, western Japan.

The company expects TV sales this business year to drop by 19 percent to 10 million with sales of LCD panels predicted to jump 29 percent after it retools production to make the smaller screens used in smartphones and tablet PCs.

Sharp in March agreed to sell a 46.48 stake in the Sakai facility to Taiwan's Hon Hai Precision Industries, part of the Foxconn Group.

Hon Hai, a major supplier to Apple Inc, is also purchasing shares in Sharp worth 66.9 billion yen giving it an 11 percent stake.