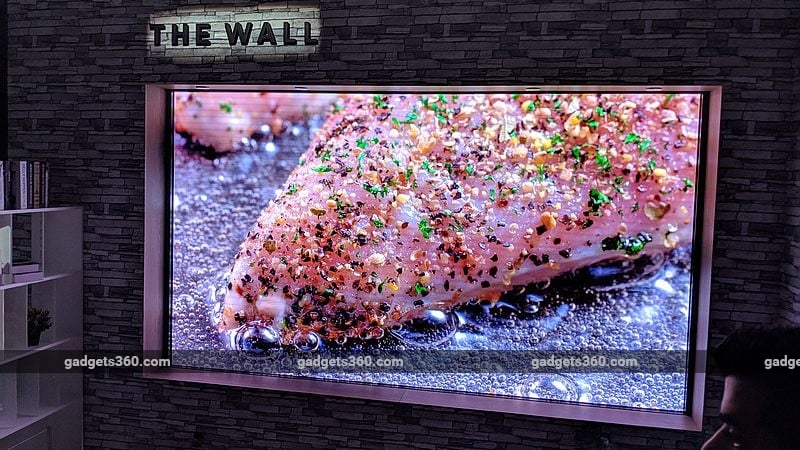 Samsung has launched a massive 4K TV ahead of CES 2018. Samsung's new TV is called 'The Wall' and is being pitched at 'the world's first modular TV'. At 146 inches, Samsung's The Wall uses MicroLED technology for display. Apart from the 146 inch 4K TV, Samsung, at CES 2018, has also unveiled the Q9S 8K QLED TV that comes with more pixels and AI inside. The massive 85-inch TV features a 'proprietary algorithm' to upscale lower resolution video for its Super Hi-Vision display. Samsung is also upgrading its 2018 Smart TV platform by adding its Bixby AI voice assistant along with integrated SmartThings technology. Additionally, Samsung has introduced a lot of technology into its new 2018 TVs, which includes HDR10+ support for Xbox One X.

At CES 2018, Samsung showcased the The Wall but did not reveal much about the availability and price of the 146-inch 4K TV. With the kind of technology that Samsung has introduced with The Wall TV, we can expect it to be quite high priced and aimed at expensive home theatre installations. Additionally, there is no information on the price and release date of the 85-inch Samsung Q9S 8K TV as well.

'The Wall; is one of several Samsung's 2018 TVs to use the new MicroLED display technology. In 2017, Samsung had launched a 34-foot 4K LED TV to challenge theatre screens but The Wall is aimed at home usage.

Samsung's 'The Wall' uses MicroLED technology that is "self-emitting". It essentially means that every pixel works without a backlight (each microscopic LED can emit its own light) and can be assembled in big sizes due to its modular design. The 146-inch TV has a bezel-less design that the company has described as 'modular-based', allowing users to fit it into "any home environment."

After LED, OLED, and Quantum Dots, Samsung's Micro LED technology could be the next step in the evolution of display technologies. At the event, Jonghee Han, President of Visual Display Business at Samsung Electronics, said, "As the world's first consumer modular MicroLED television, 'The Wall' represents another breakthrough. It can transform into any size, and delivers incredible brightness, colour gamut, colour volume and black levels."

The Samsung Q9S QLED TV comes in with its ability to learn from itself to improve over time, reports Engadget. The built-in AI technology, Samsung says will intelligently upscale non-8K resolution videos to 8K. The 8K solution upgrades feature like detail enhancement, noise reduction, edge restoration, and automatic sound adjustment for different content.

Coming to additions to Samsung's 2018 Smart TV platform, let's start with the addition of Bixby AI-based voice assistant. The company says the assistant will help enable easier interaction between TVs and their users, with the company referring to Bixby's "intuitive UX and comprehensive voice analysis capabilities." The 2018 Samsung Smart TVs will also offer get easier sharing and connectivity thanks to the SmartThings, the company's IoT platform hub. The company will offer only one SmartThings app now with which to control compatible smart home devices. The company also revealed that 2018 will also see the launch of a Universal Guide, a program guide that recommends TV programs and content according to a user's preferences. Finally, its Smart TV range will offer HDR10+ support for the Xbox One, Mashable reports.