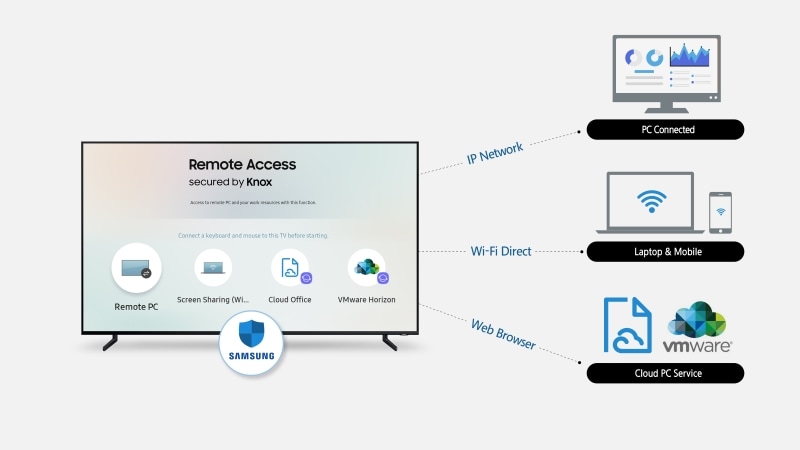 Samsung has announced Remote Access, a new feature for its upcoming 2019 smart TVs that promises to let users remotely access their PCs on their TV screens using a connected keyboard and mouse. According to the company, the feature will let people work on documents, play games, surf the Web, and even stream content on their smart TV screens, all through a PC or laptop. Connections can be wireless, and the PC doesn't even have to be in the same house as the TV. The feature also extends to smartphones and tablets, although Samsung has not announced details such as operating system compatibility yet.

According to a brief announcement that Samsung has put up, users will be able to connect their PCs or other devices via a standard home network or use a Wi-Fi Direct connection without any need for a router. Remote Access could include media streaming as well as remote desktop access.

There is also the option to use a cloud-hosted PC service, which Samsung will offer in partnership with VMWare. This service will include office productivity software, but there are no specifics of what exactly is possible and whether this will require a subscription. It appears that this service will also be available to users of other Samsung devices.

In the press statement, Shankar Iyer, Senior Vice President and General Manager, End User Computing at VMware, said “...Those working remotely will have a seamless experience as they access virtual desktops, applications, and online services from their favorite Samsung devices – including a Samsung Smart TV”.

Users will be able to connect a keyboard and mouse directly to their smart TV to control the remote PC or other device. Samsung promises an intuitive and convenient user experience. Also, thanks to the VMWare partnership and the company's own Knox security services, users will be able to access and control their devices from anywhere in the world, not just within their homes. Samsung says that periodic software updates will keep the system secure, though it isn't known how long each TV model will be supported.

More details should emerge when Samsung announces its 2019 TV lineup at the upcoming CES 2019 trade show.