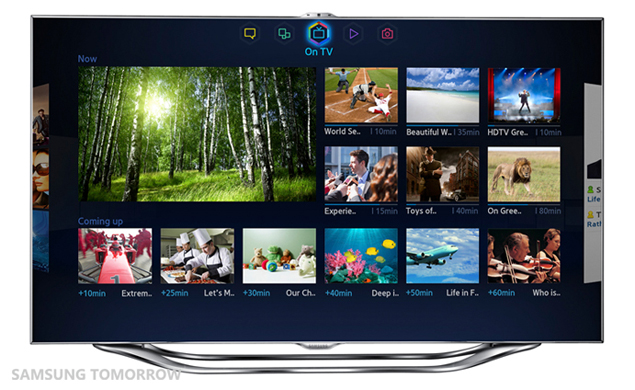 Samsung is ready to introduce its updated version of the Smart Hub interface for its Smart TVs at CES 2013 scheduled for January 8th in Las vegas.

Smart Hub is a content platform for Samsung Smart TVs that allows users to navigate through their television's features. The company claims that the new Smart Hub will offer a more intuitive experience to its users.

With a new updated version of the Smart Hub, users can now browse through live broadcasts, the internet and other content such as movies, apps and photos and videos.

Another noteworthy feature will be a unique 'flipping' function that will let users browse through the five categories with motion control, whereby you can use gestures to flip through menus.

Gesture control has already been a part of Samsung's Smart Interaction feature seen in the ES9000, ES7500, ES8000 LED, ES9000 LED TVs and E8000 Plasma TVs. It has released the Angry Birds app making use of motion control. Users can experience gameplay by waving their hands to fling the birds and equip them with their unique powers.

The Korean giant has also released a 1min 9sec teaser video on YouTube hinting at a new Smart TV, expected to be unveiled at CES 2013. The video shows many TV sets racing towards the venue to witness the unveiling of the television draped in a white cloth. The commercial ends with the phrase, "All the TVs are rushing to see Samsung's new TV".

There isn't much in the video with respect to what to expect from the TV, but earlier rumours have indicated that the company is gearing up to launch an 85-inch Ultra High Definition TV set at the forthcoming CES event.

We'll get to see what Samsung unveils at CES next year until then enjoy this teaser video.

Colleges help students put their best foot forward online
Finally, a closet that suggests what you should wear