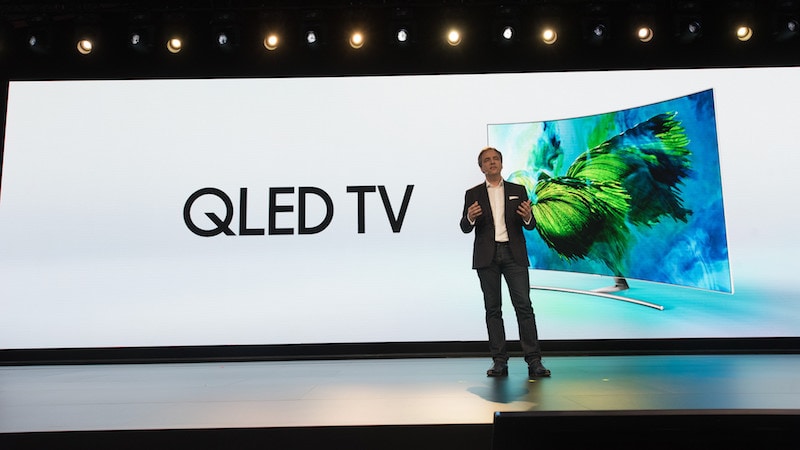 At a launch event in Paris on Tuesday, Samsung officially announced the global launch of its new range of QLED TVs that were first showcased at CES earlier this year.

At the heart of Samsung's new QLED TVs are 'Quantum Dots', which are nano-sized particles that turn light into colour. This new technology allows for darker blacks, and brighter whites, with the TVs capable of hitting brightness levels between 1500 and 2000 nits. What's more, the Samsung QLED TVs support 100 percent colour volume, which, simply put, means they are capable of reproducing accurate colours even at very low or very high brightness levels.

While we've seen Quantum Dot technology in the past in some Samsung LED-backlit LCD TVs, the South Korean company is claiming improved stability and efficiency in the technology with its new range of QLED TVs. Samsung believes QLED "addresses long term question marks" regarding the future of display technology, and if this week's event is any indication, it is betting big on QLED to be its answer to OLED used by rivals LG, and more recently, Sony on their flagship televisions.

Blending into the home
Samsung is positing the QLED TVs as design objects you will actually want to flaunt, instead of messy boxes you try to hide away in a corner. Samsung has developed a new no-gap wall mounting solution that makes the TV "absolutely flush with the wall", resulting in a nicer overall finish. Samsung says the design of the wall amounting solution will be open, which means you will be able to buy third-party mounts that achieve the same effect.

If putting the TV on a wall is not your thing, you will be able to choose between Samsung's Gravity Stand and the Studio Stand to position your QLED TV where you like, while making sure it fits in elegantly with its surroundings.

Cable clutter is always a concern and Samsung aims to address that with a new optical cable "that is barely visible and much longer" than most cables. Samsung's new 1.8mm see-through cable blends in with white walls, and once its paired with the Samsung One Connect Box, it will be the only cable connected to your Samsung QLED TV (other than the power cable of course).

You connect all your boxes - set-top box, media players, gaming consoles etc. - to the Samsung One Connect Box. The QLED TV ships with an optical cable that's 5 metres in length, while a 15-metre cable can be purchased separately, if needed. The idea is that the Samsung One Connect Box and all your other boxes sit at a distance from your TV, and you use the Samsung One Remote Control control to control all your devices. The cable is capable of data transmission at up to 75GBps, so you don't need to worry about choking it up even if you have multiple, bandwidth-intensive devices connected in the future. Samsung says the One Connect Box automatically detects any devices you connect and users will be able to "control most devices in the market" using the bundled remote.

Smart TV interface
Samsung is also tweaking the software that the new QLED TVs will ship with. The company says the aim is to provide a unified experience across all apps and services as well as devices, and the screen that you see when you power on your TV will pull-in content from all these sources. As you would expect, the TV comes with voice control, including the ability to search for content across various services. This means you will be able to, say, ask the TV to play Seinfeld episodes without worrying about whether it's on Netflix, Hulu, or Prime Video.

You will also be able to control the TV using the Samsung Smart View app for Android and iOS, or simply cast videos from your phone to the your Samsung QLED TV. The new models will come with Samsung TV Plus services and a music service powered by Shazam, which will also include recommendations from sources like Spotify and Deezer.

Models and availability
Samsung has announced 12 QLED TVs across its Q7, Q8, and Q9 range of televisions, with screen size between 49- and 88-inches, though exact availability of models may vary across regions. The Q9 and Q8 series will feature TVs with flat and curved panels respectively, while the Q7 includes both curved and flat panel televisions.

The new Samsung QLED TVs are now up for pre-order in the US and some European countries, with availability later this month, and prices starting at $2,799.99 (approximately Rs. 1.85 lakhs) in the US. A Samsung representative told Gadgets 360 that its QLED TVs are likely to launch in India in May this year, though the company is said to be still finalising which models will be available in the country.

Disclosure: Samsung sponsored the correspondent's flights and hotel for the launch event in Paris.

Google and Levi's Smart Jacket Shows What's Coming Next for Wearables
Microsoft to Roll Out Final Version of Windows 10 Creators Update to Testers This Month: Reports