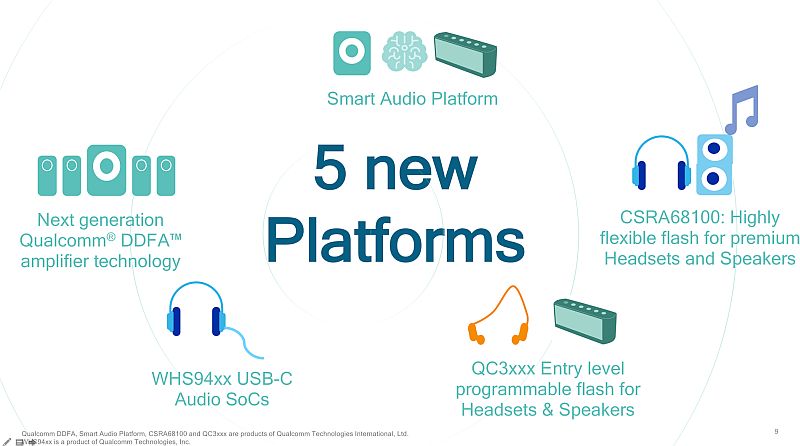 Qualcomm has announced a reference "smart audio" platform for manufacturers that want to develop a smart home speaker like Google Home, Amazon Echo, or the newly announced Apple HomePod. The company says its new smart audio platform chipsets will reduce development time for manufacturers as they have the necessary hardware, software, and tools.

The chipmaker introduced the new audio platform at its Voice and Music Developers conference in Shenzhen, alongside the all-new Qualcomm DDFA audio amplifier technology and new USB Type-C audio SoCs. Qualcomm at the conference also talked about few of the trends in audio industry including streaming of music, removal of headphone jack, and emergence of smart assistants and speakers.

Under the company's new Qualcomm smart audio platform, it will be offering the APQ8009 and APQ8017 chips; these SoCs will come with a range of software configurations designed to allow OEMs to create smart speakers across various product tiers and categories. The Qualcomm smart audio platform is planned to be available Q3 2017, though the company says that the timelinecan change. These new Qualcomm SoCs support capabilities like advanced far-field voice capture, wake-word detection, AllPlay multi-room audio streaming technology, and support for major voice ecosystems in a single solution.

The far-field voice capture will allow the smart speaker to pick up the user's voice even from afar, while the wake-word detection will enable to wake up from sleep when the hotword, for example "Hello Google," is said aloud by the user. Qualcomm's AllPlay multi-room audio streaming technology will allow users to configure multiple speakers to play the same or different songs in each room of the home from streaming services, local playlists on their devices, or DLNA media servers; moreover, the open nature of the AllPlay ecosystem will enable users to link together speakers from different brands, such as Panasonic, Hitachi, House of Marley, Magnat etc, in their home using this platform.

The Qualcomm APQ8009 and APQ8017 chips also beamforming and echo cancellation; barge-in and voice capture in noisy environments; software supporting virtual assistants, and support for hands-free voice calls over both VoIP and HFP. Qualcomm has confirmed that the new smart audio platform will receive support for Amazon Alexa Voice Service and Google Assistant later this year, as well as Android Things and Google Cast for Audio.

Qualcomm's Anthony Murray, Senior Vice President and General Manager, Voice and Music, said, "This platform is ideal for traditional speaker manufacturers wanting to make the move to a connected platform as it is designed to bring together all the necessary hardware, software and tools needed to reduce development time. It also offers a great degree of flexibility for those manufacturers who want to push the boundaries when it comes to possible future applications for smart speakers."

Additionally, the company at the event announced a new addition to its audio system-on-chip (SoCs) platform, namely CSRA68100, which is designed for premium wireless speakers and headphones. The company says it is "designed to provide OEMs with significantly more programming resources and freedom to develop use cases with unique and differentiating features." A highly integrated platform, it also supports several connectivity, system processing, audio processing and power management resources.

Qualcomm also announced QCC3XXX series of entry-level, flash-programmable audio chipsets. These are aimed at developing entry-level products at competitive price points for Bluetooth headsets and speakers. There's also the new WHS9420 and WHS9410 single chip USB audio SoC platforms, designed specifically for USB-C connected audio devices. With smartphone brands doing away with the 3.5mm headphone jack, this platform is aimed at users who want to continue to use wired headsets and speakers on their phones by means of transfer of audio via the USB Type-C port.

At the event, Qualcomm also revealed its next generation Qualcomm DDFA audio amplifier technology for audio devices like wireless speakers, soundbars, networked audio, and headphone amplifiers. The next-generation DDFA tech will be available on Qualcomm's CSRA6620 SoC, and will include a DDFA controller with eight channel inputs, two channel outputs, microcontroller and configurable audio processor. Qualcomm says the chip will "help OEMs to integrate best-in-class amplifier performance in a lower complexity, more cost effective way than was previously possible."