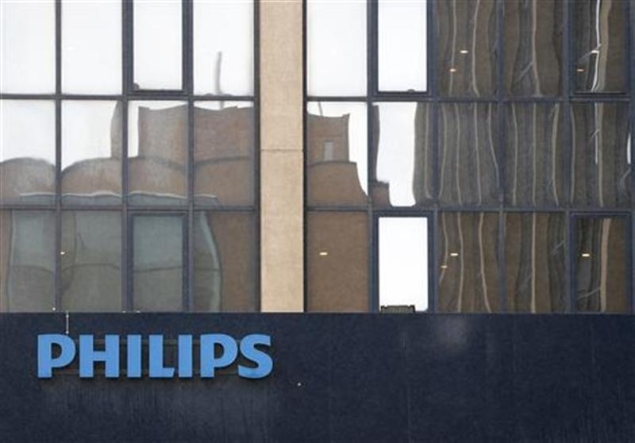 Philips Electronics beat earnings forecasts for the third consecutive quarter, boosted by cost cuts and higher sales, as a drastic overhaul of the company gathered pace.

Since taking the helm last year, chief executive Frans van Houten has reset financial targets, cut thousands of jobs and replaced his entire top executive team in an effort to turn around the company which lost 1.3 billion euros in 2011.

Philips said on Monday that plans to cut 1.1 billion euros in overheads are on track with savings in the third quarter of 306 million euros.

The company first started to show signs of a pick-up in the first half of this year.

Its shares were trading up 4.6 percent by mid morning on Monday, the biggest gainer on the FTSEurofirst 300 index of top European shares.

Van Houten said he was still cautious about the firm's growth prospects.

"The world has become a lot riskier with three headwinds simultaneously, (namely) Europe, slowing growth in China and some uncertainty in the U.S.," Van Houten told reporters on Monday.

The restructuring program was helping to mitigate some of these pressures, he said.

Kepler analyst Peter Olofsen said Philips was doing "pretty well" given the weak economies where the company operates, particularly that it reported strong healthcare orders and decent growth at its consumer unit. Philips makes more than half of its sales in mature markets including Europe and North America.

"Overall it's quite a solid set of numbers," he said.

Philips competes with Samsung and LG Electronics among others in consumer electronics, and with General Electric and Siemens in the hospital and lighting markets.

Since July, van Houten has said that he is considering options for Philips' low-margin audio and video equipment business - one of the last units to get shaken up.

On Monday he reiterated that the unit is a "business in transition," but declined to say whether a deal to split it off, similar to the one he cut with China's TPV Technology Ltd for Philips TVs, is in the works.

Van Houten did not give a full-year forecast. He said the company is on track to meet its outlook for 2013 of 4-6 percent sales growth, 10-12 percent core profit and 12-14 percent return on invested capital.

Analysts surveyed by Reuters had forecast net profit at 139 million euros on sales of 5.912 billion.