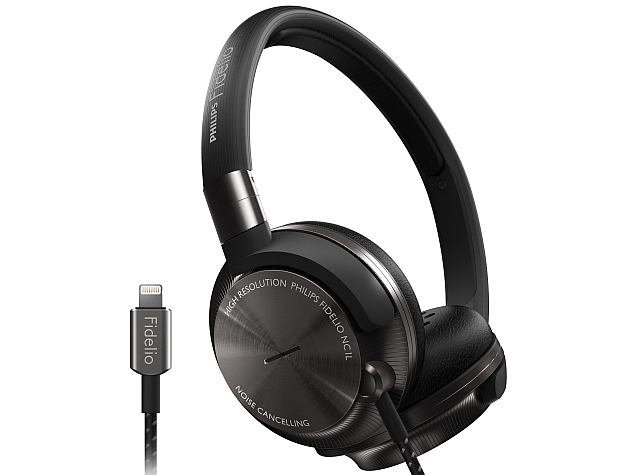 The Philips Fidelio NC1L on-ear headphones have been launched at CES 2015. The headphones are being touted by the company to be the first ever active noise cancelling (ANC) headphones to be battery-free. For now the company has not provided details about global pricing or availability, though it has mentioned a February release in India at roughly Rs. 16,000.

Instead, the Philips Fidelio NC1L on-ear headphones and the ANC technology onboard are powered by a direct digital connection to an iOS device via the Lightning connector. Philips say that 24-bit digital to analog conversion (DAC), amplification and noise cancellation all take place within the headphones themselves. The pair also features what the company is calling high-bandwidth and high-precision neodymium drivers.

"The Philips Fidelio NC1L headphones combine advanced Active Noise Cancelling technology with all the advantages of a direct digital connection to your iOS device," said Wiebo Vaartjes, CEO of Woox Innovations, a brand licensee of Philips. "Following the launch of our first Lightning-enabled headphones, the Philips Fidelio M2L, we're proud to announce another world first. Now you can immerse yourself in authentic sound without distraction, no matter how long your journey," Vaartjes added.

The on-ear headphones, which feature a built-in mic, are said to feature three modes - active noise cancelling (for full-immersion), open-ear listening (which allows some ambient noise in), natural voice (a specifically a calibrated level of ANC meant for a making calls).

The Philips Fidelio NC1L on-ear headphones are said to use a hybrid ANC approach, with four microphones detecting ambient noise before inverting the signal. Two 'FeedBackward' microphones positioned next to the headphone drivers are claimed to provide strong noise cancellation at low frequencies, whilst the two 'FeedForward' microphones positioned on the outside of the headphones are touted to extend the bandwidth of noise cancellation into the mid and high frequencies.

To be noted, is that JBL at CES 2015 also launched headphones that feature active noise cancellation without a battery pack. Specifically, the JBL Reflect Aware are in-ear sports headphones, and work in conjunction with the JBL Ambient Aware app. It comes with a small 4-button remote control for play/pause and volume controls in addition to ANC on/off. The JBL Reflect Aware will be available for a market price of $149 (approximately Rs. 9,400).
Comments