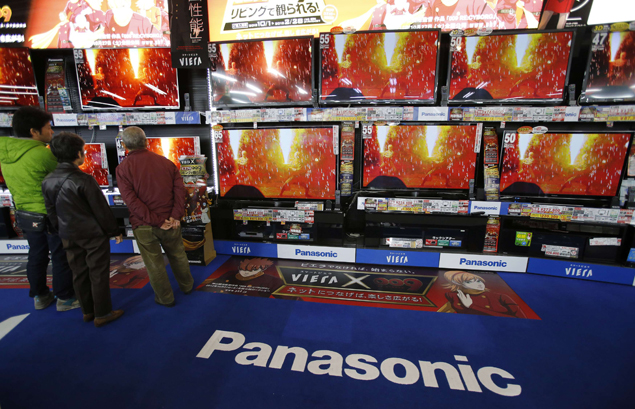 As it battles for Christmas shoppers' wallets in the year-end holiday season, the sprawling electronics conglomerate is also seeking buyers for some of those properties to trim its fixed costs and improve cashflow at a time of intense competition, particularly from South Korean rivals such as Samsung Electronics Co.

Japan's other troubled TV makers, Sony Corp and Sharp Corp, are also selling buildings and businesses in a giant 'garage sale' that could raise a combined $3 billion.

"We have a lot of land and buildings in Japan and overseas," he said in an interview at the company's head office in Osaka, in western Japan. He declined to list which properties would go on the block, but said most are in Japan.

Included is a 24-storey central Tokyo block - built in 2003 with more than 47,300 square metres and housing 2,000 Panasonic workers - a source familiar with the plan told Reuters.

Kawai added that Panasonic would raise about a quarter of the sell-off funds by getting rid of shares it owns in other companies - a common practice of cross-shareholdings in Japan.

The proceeds would help bolster free cashflow to 200 billion yen for the business year to March, Kawai said, and allow Panasonic to reduce its debt and maintain its crucial research and development effort as it revamps its business portfolio.

It will sell more assets in the year starting in April if cashflow dips below 200 billion yen, Kawai added. Panasonic President Kazuhiro Tsuga has promised to shut or sell businesses operating at below a 5 percent margin. Those sales could start as soon as April.

Panasonic's fixed assets of $21 billion are around 30 percent more than those of Apple Inc , and are almost double the company's market value. The company, founded almost a century ago as a small electrical extension socket maker, trades at around half its book value - which includes intangible assets such as patents. Sony trades at 39 percent of book, Sharp at 30 percent.

The fixed assets - buildings, land and machinery - of the three companies that were not so long ago a byword for innovation in household gadgetry total around $42 billion, while their combined market value is $24 billion.

Cashflow is king
The three firms have been downgraded by credit ratings agencies, making it tougher to raise funding on capital markets, and making asset sales more urgent.

Selling assets "is good in terms of their credit ratings because, for all three, it will lower fixed costs and they can reduce their capex requirements. Eventually, this could improve operating margins and, more importantly, cashflow," said Alvin Lim, an analyst at Fitch Ratings in Seoul.

Fitch, which makes its ratings without input from company management, last month cut Panasonic to BB and Sony to BB minus, the first time one of the major agencies has relegated either company to junk status. Sharp is ranked B minus, adding to its borrowing costs.

"We rate Panasonic as investment grade, and it should have various funding options. Selling assets it can do without, to avoid raising additional borrowing, can be an option," said Osamu Kobayashi, an analyst at Standard & Poor's.

While Korean rivals have also benefited from a weaker local currency, data from the Japan Electronics and Information Technology Industries Association shows that Japanese production of consumer electronic equipment fell to just above $15 billion last year from more than $19 billion a decade ago. Output in September was just $980 million, half last year's level.

"The gap with Korean makers seems to be widening. It's going to be very difficult for them to regain their top-tier position," said Fitch's Lim.

As the three Japanese firms, all under new leadership, have sketched out restructuring plans, the cost of insuring their debt against defaulting in 5 years has dropped from spikes just a month ago. Credit default swaps for Sharp and Sony are down to levels last seen 3 months ago, while Panasonic's have dropped 40 percent in the past month.

Three paths
While Panasonic is looking to revamp its business around batteries, auto parts and household appliances, Sony is doubling down on smartphones, gaming and cameras. Sharp, meanwhile, is focusing on display screens and is forging alliances with the likes of Taiwan's Hon Hai Precision Industry and U.S. chipmaker Qualcomm Inc .

Sony may also take the real estate sale route to raise much-needed cash, with a possible sale of its 37-storey New York headquarters, dubbed by New Yorkers as the 'Chippendale' because of its design that is reminiscent of the period English furniture. Selling that jewel could raise $1 billion, media have reported.

The maker of Vaio laptops, PlayStation gaming consoles and Bravia TVs may also sell its battery business, which makes lithium ion power packs for tablets, PCs and mobile phones. The company has been approached by investment banks offering to sell the unit, which employs 2,700 people and has three factories in Japan and two overseas assembly plants. Sony values the business's fixed assets at $636 million.

Sharp has mortgaged nearly all its properties to secure a $4.6 billion bailout from Japanese banks and so has few assets to offer in a grand garage sale.

Instead, it's selling part of the garage.

Qualcomm has agreed to buy a 5 percent stake in Sharp, making it the largest shareholder. Hon Hai, which earlier this year agreed to invest in Sharp - before its stock slumped in the wake of record losses - has said it remains interested in taking a stake.

"Whatever they can get to get through this fiscal period by scaling down their operation is a critical step for them to remain afloat," said Fitch's Lim.