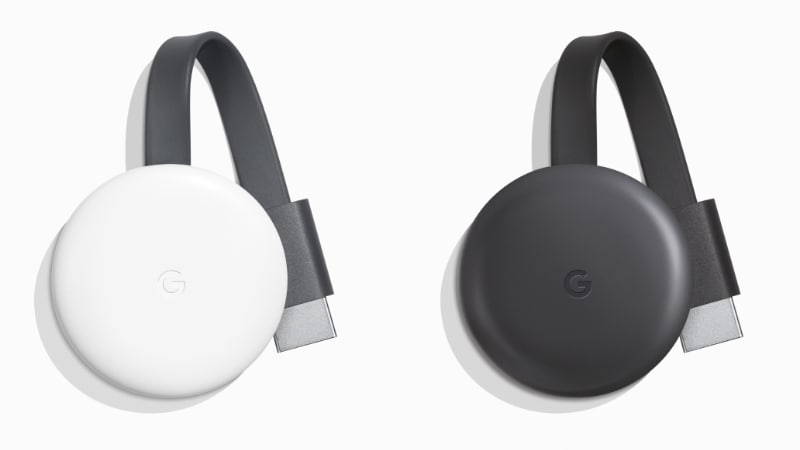 Alongside unveiling the new Pixel family that includes the Pixel 3 smartphones and the Pixel Slate tablet, Google has brought the new Chromecast. The latest entrant, which is the third-generation Chromecast in the range that was introduced back in July 2013, is touted to be 15 percent faster than the previous Chromecast offering that debuted back in September 2015 and was launched in India in April 2016. The new Google Chromecast also matches the aesthetics of the rest of the Made by Google family that largely includes Google Home speakers, Pixel phones and computing devices, and Daydream View headset with Chalk and Charcoal colour options and a matte-finish build. Also, there is also Google's iconic "G" logo.

With the faster performance than its predecessor, the new Google Chromecast is capable of supporting 60fps video streaming at full-HD (1080p) resolution instead of the previous HD (720p) resolution for 60fps streaming. Google has also added the ability to let you connect the new Chromecast with your Google Home speaker and control your television experience simply using voice commands. For instance, you can pass a command to Google Assistant through your Google Home speaker to play a particular video on YouTube or check what all the scenes your Nest cameras are capturing. The search giant is also later this year adding the feature to you play music in sync throughout your home by adding the new Chromecast to multiple speakers. This sounds similar to how Google Chromecast Audio works presently.

Aside from the fresh capabilities, the new Chromecast offers the same features as the previous Chromecast models. It lets you mirror your smartphone's screen or cast the content of a compatible app to an HDTV. You can also mirror the screen of your computer to your TV directly using Chromecast and Chrome browser. Further, there are several apps that support the casting feature on your Android or iOS device, including Netflix, YouTube, Google Play Movies, HBO, and Hulu among various others.

Some early rumours had claimed that the new Chromecast would come with Bluetooth support and faster and improved Wi-Fi connectivity. However, there isn't any official word on the presence of Bluetooth or newer Wi-Fi addition. Google also hasn't provided a USB Type-C port as an upgrade over the previous Chromecast model as there is Micro-USB on the power supply front. Moreover, there is the previously featured flexible HDMI cable that enables connectivity with your TV.

The new Chromecast looks quite similar to its predecessor with the similar hockey puck-like design. Nevertheless, there is a matte finish instead of the glossy one on the last Chromecast generation. There are also all-new Chalk and Charcoal colour options.

That being said, the new Chromecast comes with a price tag of $35 (roughly Rs. 2,600) - identical to the price of the previous Chromecast model. It is already available for purchase through the Google Store in Australia, Canada, Denmark, Finland, Great Britain, Japan, Netherlands, New Zealand, Norway, Singapore, Sweden, and the US, with more countries to follow next year. Price and availability of the new Chromecast in India are yet to be announced.

New Evidence of Hacked Super Micro Hardware Said to Be Found in US Telecom
Xiaomi Mi Box S With 4K HDR, Android TV Launched, Up for Pre-Orders on Walmart