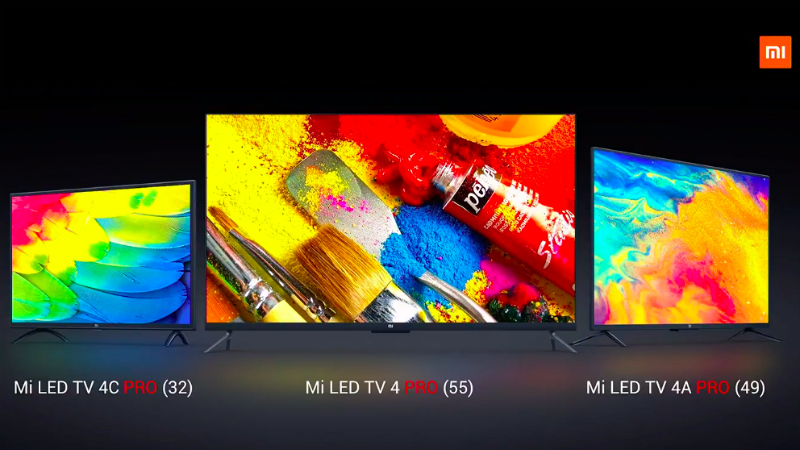 Xiaomi on Thursday announced the launch of three new models in its Mi TV range — the Mi TV 4C Pro with a 32-inch display, Mi TV 4A Pro with a 49-inch panel, and the Mi TV 4 Pro with a 55-inch display. All the new Mi TV models, much like the previous ones, will be powered by Xiaomi's custom PatchWall UI that has been personalised for Indian users. Apart from PatchWall UI, the three new Mi TV variants come with Android TV (Android Oreo 8.1) out-of-the-box with a physical button on the remote to switch between the two interfaces. Another major feature headed to the Xiaomi TVs is voice search, which uses the new Bluetooth remote and Google Voice to let users navigate the UI using just voice commands. At the event, Xiaomi also said it has 650 TV service points across India.

Mi TV 4C Pro price in India is set at Rs. 14,999 for the base 32-inch variant, and Rs. 29,999 for the Mi TV 4A Pro 49-inch model. Both these models will go on sale at 9pm on October 9 via Amazon.in and Mi.com. As for the 55-inch Mi TV 4 Pro price in India, buyers will have to shell out Rs. 49,999 and it will go on sale on October 10 at 12pm via Flipkart and Mi.com. However, it should be noted that the prices of the 49-inch and 55-inch models are introductory in nature and will be valid for one month only. All three models will be heading to Mi Home stores and other offline channel partners soon.

All three models in the Mi TV 4A Pro range come with Bluetooth v4.2 support, and get the new 11-button remote with a dedicated voice search button. Xiaomi at the event also announced new content partners in India — including Eros Now, Jio Cinema, Hooq, and Epic. The company also announced that support for Amazon Prime Video on PatchWall UI will come soon to the new TV models (as an OTA update), and later on for the older Mi TV 4 and Mi TV 4A models. Xiaomi did not comment on Netflix support on any of the Mi TV variants.

The new PatchWall experience will be rolled out to all existing Mi TVs in the coming months, starting with the 32-inch and 43-inch Mi TV 4A models early next year.