The PatchWall 3.0 update rolls out with over 16 content partners including ALT Balaji, Zee5, Disney+ Hotstar, Sun NXT, JioCinema, and more. 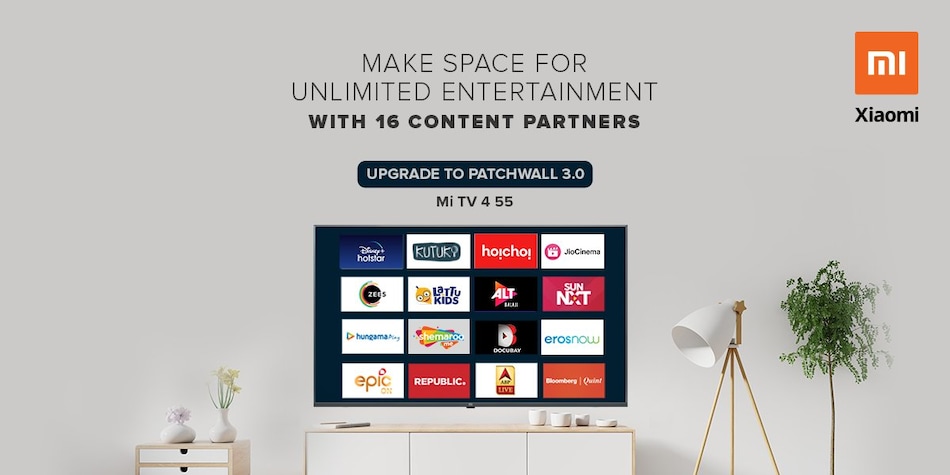 Xiaomi took to Twitter to announce that PatchWall 3.0 update is rolling out to Mi TV 4 55-inch users in India. The update brings 16+ content partners including ALT Balaji, Zee5, Disney+ Hotstar, Sun NXT, JioCinema, Lattu Kids, Docubay, Eros Now, Republic, Bloomberg Quint, ABP Live, Shemaroo Me, Hungama Play, Epic On, and more. OTT apps like DocuBay stream international documentaries across various topics, while apps like Lattu Kids provide over 1,500 hours of content suitable for children. The company says that the rollout is starting today, so it may be a while before all users receive it. It will be available as an over-the-air (OTA) update.

To recall, PatchWall 3.0 comes with a number of new features and improvements. This includes enhancements for the UI, cleaner animations, a new font called Mi Lanting Pro, horizontal scrolling, and more. Deeper integration of Disney+ Hotstar means a new dedicated sports channel on Mi TVs. This sports channel features deep integration with Disney+ Hotstar and one-click play for specific sports content, based on what is available to watch at the time of viewing.

There's also a new Mi List feature that curates lists of movies and TV shows sorted and created according to genre. Xiaomi claims that Mi List is more ‘contextually aware; and recommends content based on occasions, festivals, days of national importance, and more.