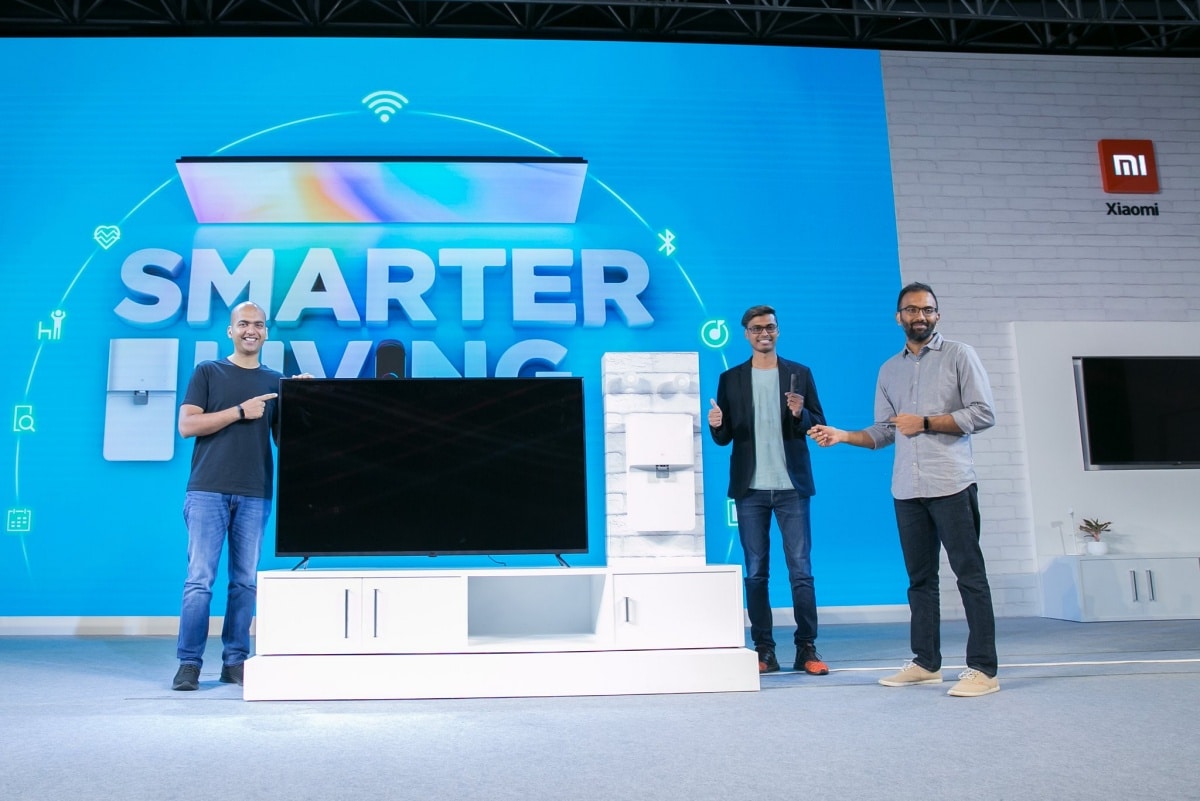 Xiaomi's Smart Living 2020 event started with the company's India chief Manu Kumar Jain on the stage. He talked about the company's various milestones till now, including the 100 million smartphone sales in five years. Jain then moved on to describe how Xiaomi is much more than just a smartphone company. According to Jain, Xiaomi has over 200 ecosystem companies, in which it has a significant stake. Xiaomi is bringing some of these smart home devices to India today.

Among today's launches, Jain started with Mi TVs. As expected, the company is launching four new smart TV models in the country today, including its flagship Mi TV 4X 65-inch. Jain says that Xiaomi manufactures 80 percent of the Mi TVs sold in India in the country itself. The company has sold over 3 million Mi TV till now. Jain then invited XIaomi's Sudeep Sahu to detail the new Xiaomi smart TVs.

According to Sahu, Mi TV 4X 65-inch offers 40 percent more viewable area than a 55-inch TV. It sports a metal design with ultra-slim bezels. The TV uses the company's Vivid Colour Engine and packs an ultra-bright display. The Mi TV 4X 65-inch has the brightest display ever shipped by Xiaomi in any smart TV. It comes with 4K UHD resolution and supports HDR 10. The Mi TV 4X 65-inch also supports Dolby Audio and DTS HD.

Sahu then announced that the company is adding more content partners to PatchWall, including Netflix. He also talked about PatchWall 2.0, the new version of the company's smart TV user interface. The PatchWall 2.0 brings access to live news without any registrations or log-ins.  Xiaomi Mi TV 4X 65-inch runs on Android 9.0 TV. Among other specifications, you will get quad-core Cortex A55 processor, 20W speakers, and Bluetooth 5.0.

According to Sahu, the new Mi TV models will come with Android TV's new Data Saver feature. These TVs will be the first in the world to get this feature. The feature will allow users to watch more content with limited amount of data. There is a data counter and support to cast local files to TV feature as well via Files Go app.

Additionally, Xiaomi is bringing a new Black version of the Mi Soundbar to India. It will cost Rs. 4,999.

According to Reddy, the Mi Smart Water Purifier comes with three different purifying cartridges and offers a five-level purification. The first cartridge features polypropylene cotton and activate carbon. The second cartridge packs RO technology, and the third cartridge has post-activated carbon. There is a UV lamp in the water tank as well.

Mi Smart Water Purifier also offers real-time monitoring and for the same, the company has include two TDS sensors. The TDS levels can be seen on the Mi Home app.  The app will also allow consumers to buy additional water filters. According to Xiaomi, Mi Smart Water Purifier doesn't need an expert to replace the filter and it can be done by anyone within 30 seconds.

Reddy then moved on to the Mi Smart Band 4. According to him, Xiaomi has shipped 1.5 million Mi Band 3 units until now in India. Mi Smart Band 4 comes with features like a 0.95-inch colour AMOLED touchscreen display with 120x240 pixels resolution. It is also claimed to be capable of offering 20 days of battery life on a single charge. Additionally, the smart band packs a six-axis accelerometer that helps it monitor physical activities, including cycling, exercise, running, and walking. There is 24x7 heart rate monitoring support, 50 metres water-resistance, and music control support as well.

Reddy then launched the new Mi Motion Activated Night Light 2, a new product that is being put on the company's crowdfunding platform in India beginning tomorrow. As the name suggests, Mi Motion Activated Night Light 2 lights up on motion and can work in low to dark ambient light. It has two brightness levels and sports a minimalist design. During the crowdfunding stage, it will cost just Rs. 500.

The event is over. You can check out the full video presentation below.