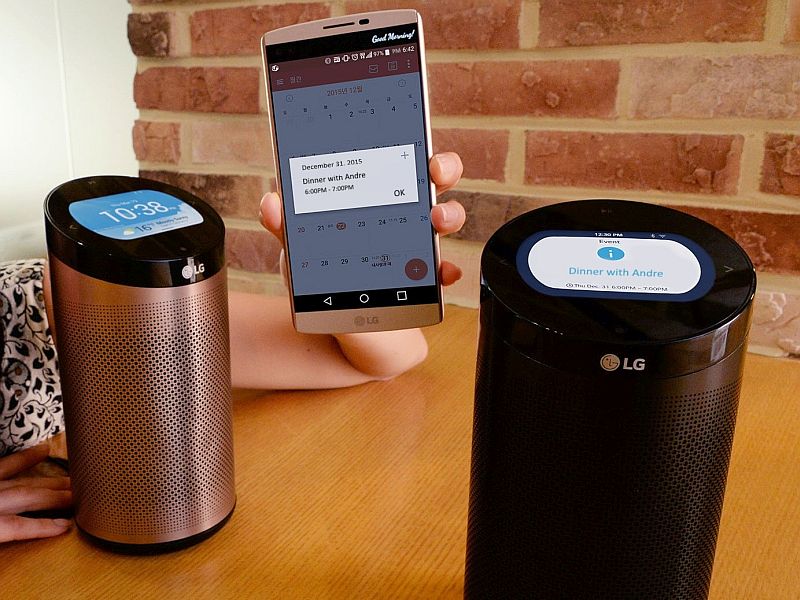 LG has lately been on a launching spree and has been revealing its new lineup of devices that will be launched at upcoming International Consumer Electronics Show (CES) in Las Vegas. The South Korean company, soon after revealing its new webOS 3.0-based smart TVs, Hom-Bot Turbo+, and LG Tone+ (aka LG Tone Plus) Bluetooth stereo headset, has now announced the new IoT-enabled SmartThinQ Hub to be revealed at CES 2016.

The new LG SmartThinQ Hub is basically a Bluetooth speaker but is more than that in functionality as it can control appliances and also sports a display where it can show reminders from personal calendar. It is for this reason the speaker is being called similar to Amazon's Echo speaker, which features the Alexa virtual assistant. The SmartThinQ Hub features a 3.5-inch LCD display and can connects to a smartphone app to communicate with smart appliances and smart sensors in the home.

Some of the smart appliances SmartThinQ Hub can control include washing machines, refrigerators, ovens, robotic vacuum cleaners, air conditioners and other home sensors.

LG says that the SmartThinQ Hub plays a "central role in LG's smart home platform" by gathering details from smart appliances as well as conventional devices connected to SmartThinQ sensors via Wi-Fi, Zigbee and Bluetooth. According to the company, the new SmartThinQ Hub will show data as notifications on the LCD display as well as will announce through the built-in speakers of the device.

The new device will be available in metallic body in Champagne Gold and Black colours. The SmartThinQ Hub can stream music from free radio stations via iHeartRadio or even play through connected smartphone or tablet via Bluetooth.

LG adds that the SmartThinQ Hub will be compatible with a several other devices from other manufacturers and service providers that support the AllJoyn Alliance open source framework.

Announcing the new SmartThinQ Hub, Jo Seong-jin, President and CEO of the LG Electronics Home Appliance and Air Solution Company said, "The LG SmartThinQ Hub is just another example of the open approach we believe is the future of the smart home. Openness and strong partnerships with industry leaders is what will make smart home technology more accessible and more convenient to consumers. And at the end of the day, that is what our smart home strategy is all about."

Samsung Patent Tips Development of Smart Ring
Own a PS4? Exclusive Games Are on the Way Says Top Executive