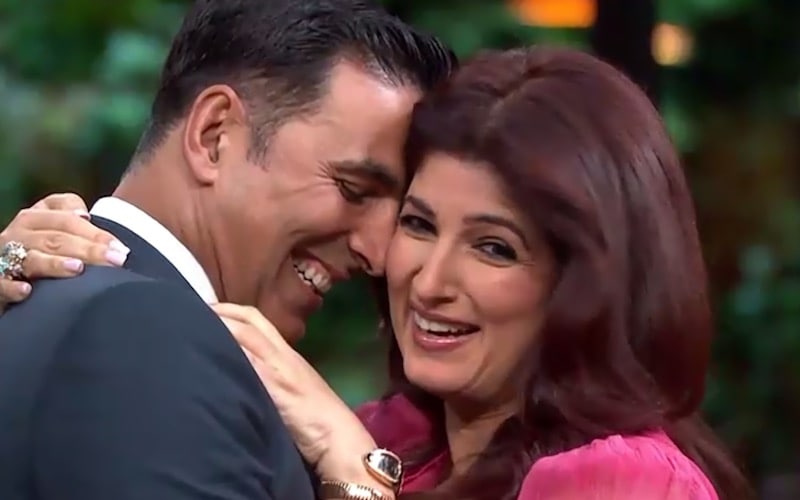 Season 5 episode 2 of Koffee With Karan featuring Twinkle Khanna and Akshay Kumar aired on Sunday evening, and with Mrs. Funny Bones in the house, it was no surprise that the show was a laugh-a-minute ride.

While Akshay Kumar may have been the biggest star in the studios, it was Twinkle Khanna who grabbed all the headlines with her candid answers. From her take on the 'unbutton' controversy, to multiple jokes at the host Karan Johar's expense, there was no stopping the actor-turned-author, who has amassed nearly 1.75 million followers on Twitter thanks to her wit and candour.

Perhaps the biggest highlight of the evening, however, was when Akshay Kumar sang Frank Sinatra's Strangers in the Night for Twinkle Khanna. Akshay revealed that the couple used to listen to this song a lot when they started dating, and he spent over a month practising to deliver the perfect rendition of the song for the duo's first appearance on television on Sunday evening.

By Monday morning, the song was trending on iTunes with Frank Sinatra's original Strangers in the Night the 16th most purchased song on iTunes India, thanks no doubt due to Akshay's performance on Koffee With Karan for Twinkle Khanna.

Twinkle Khanna made her debut on Koffee With Karan with this episode, while Akshay had already appeared last season. The Akshay-Twinkle Koffee session was a laugh riot with the duo revealing details about the time they were under the impression of enjoying a "fling", the big wedding proposal, and Dimple Kapadia's (Twinkle's mother) warning about Akshay's sexual orientation.

Also, no points for guessing who won the famous and feared rapid fire round – Twinkle Khanna took the Koffee hamper home like a boss. Every time Twinkle Khanna spoke on the show, Karana Johar couldn't stop laughing, while Akshay Kumar was seen hiding behind his coffee mug.

Towards the end of the Koffee With Karan Season 5 episode 2, Twinkle Khanna and Akshay Kumar managed to put the show host Karan on the spot, thanks to a serious of questions by their four-year-old daughter Nitara.