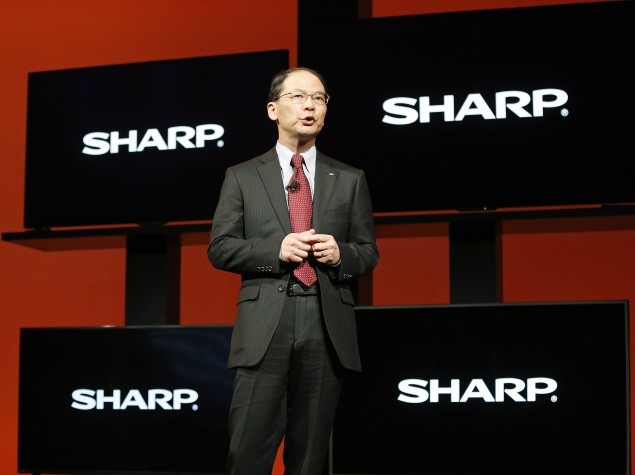 Japan's Sharp Corp and its main banks are to meet on Thursday to agree on a $1.7 billion rescue and restructuring plan for the loss-making electronics maker, a person involved in the discussions said.

An agreement between the Osaka-based company and its main lenders, Mizuho Bank and Bank of Tokyo-Mitsubishi UFJ, would be Sharp's second big bailout since 2012. Sharp is on track for its third annual net loss in four years due to weakness in its liquid crystal display (LCD) and TV operations.

The lenders will inject a combined 200 billion yen ($1.7 billion) in a debt-for-equity swap, while Sharp will cut 5,000 jobs, scale back its North American television operations and is also likely to agree to spinning off its LCD unit, the source said.

Relief that Sharp was extracting a bailout from its lenders, sent its stock 4 percent higher in morning trade.

The parties are unlikely to make any announcement on Thursday after CEO Kozo Takahashi meets with bankers to finalise a deal, the source said, declining to be identified as he was not authorised to speak on the matter.

Sharp spokeswoman Miyuki Nakayama said the company was considering various options, but nothing had been decided. More will be revealed in May, when it releases a new business plan, she said.

The source said the LCD operations, while likely to be spun off to improve transparency and accountability, would continue to be owned by Sharp for now. Analysts have speculated that a spin off could help pave the way to an eventual deal, such as a merger with rival Japan Display Inc.

Sources have previously said that Sharp and the banks had hoped to agree on a restructuring plan in March, but the company resisted drastic measures and staff cuts that its lenders sought.

Sad Puppies Taking a Bite Out of the Hugo Awards
PM Modi in Canada: Where Are the Google and Microsoft of India?