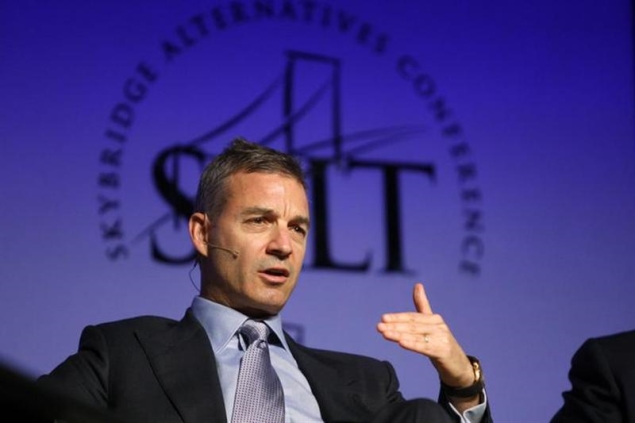 Loeb's Third Point hedge fund has built up a $1.1 billion stake in Sony, making it the Japanese group's biggest shareholder, and Loeb said on Tuesday he was pushing Sony to sell up to a fifth of its profitable music and movie business in a move he says would help turn around its struggling electronics business.

"I rely a lot on my experience and pattern recognition. The Sony situation reminded me a lot of Yahoo," Loeb said in an interview with Reuters in Tokyo on Wednesday.

In the case of Yahoo, Loeb began pushing the company in 2011 to go back to basics to compete against the likes of Google Inc and Facebook Inc. Just as Yahoo struggled to adapt to developments like social networking and mobile computing, Sony has been overtaken by nimbler consumer electronic rivals such as Samsung Electronics Co and Apple Inc.

Although Sony Entertainment, which includes artists like Beyonce and Adele and hit franchises like "Spider-Man", brought in 37 percent of the company's operating profit in the year to end-March, it still lags the rest of the industry, Loeb said.

"Their margins are the lowest in the industry," he noted. "We think it could be a lot more disciplined."

Sharper focus
Loeb, 51, also takes issue with the idea that Sony benefits from having both hardware and content, a core tenet of the Japanese firm's strategy going back to the 1980s when it dominated the market for portable entertainment with its Walkman cassette players.

"It's all been theoretical," Loeb said. "There has been no monetization of that relationship."

Loeb has said he would be happy to take a seat on Sony's board and - unlike his attack on Yahoo's leadership, which led to the dismissal of CEO Scott Thompson and the hiring of Google veteran Marissa Mayer - he praised Sony CEO Kazuo Hirai for the steps he has taken since taking the job in April 2012.

But Loeb has also said Sony needs to sharpen its focus and pull back from commoditised products like semiconductors where it lacks scale to streamline its offerings.

"I think Mr. Hirai is doing many of the right things. And he says Sony must change, Sony will change. In his words there is some sense of urgency," Loeb said. "I also think he brings western sensibility to management."

Loeb's call for a shake-up at Sony gave fresh momentum for a rally in its shares. Sony stock closed up more than 10 percent on Wednesday in Tokyo at a near 23-month high. The shares have more than doubled in value since late December as the yen has weakened and foreign investors returned to Japanese stocks.

Loeb said he shares a widespread bullishness on Japan because of the monetary and fiscal stimulus policies and promises of structural reform that have been central to Prime Minister Shinzo Abe's new administration.

"Things are happening quickly in Japan with 'Abenomics'," he said. "I think what we are trying to do is very consistent with the structural reform that has to happen for Japan."

He added "We wouldn't be here if we didn't think there was a tailwind from the economic policies in Japan. In the case of Sony, it is very important they have the wind at their back economically."

Core business
Third Point's holding of Sony shares makes up less than half of the fund's holdings in Japan, Loeb said, indicating the hedge funds' portfolio of Japanese stocks could be worth around $3 billion or more. He declined to comment on the average price at which the fund acquired Sony shares. Through direct ownership and swap agreements, the $13 billion New York-based hedge fund has about 6.3 percent of Sony's shares.

Sony executives have said repeatedly they see entertainment as core to the company's business. In a statement on Tuesday, Sony said its entertainment assets were "not for sale," but left open the door for more discussions with Loeb as part of a "constructive dialogue with our shareholders."

For now, Third Point wants to see how Sony's board responds to its proposal to spin off its entertainment arm through an initial public offering and whether it hires investment advisers to assess the merits of that idea, a person familiar with the hedge fund's strategy said.

But Loeb could turn more aggressive, as he did with Yahoo, if the Sony board fails to take action. He would have the right to call for an extraordinary stockholder meeting six months after he acquired more than 3 percent of Sony shares.

Yahoo shares have almost doubled in the past 12 months.