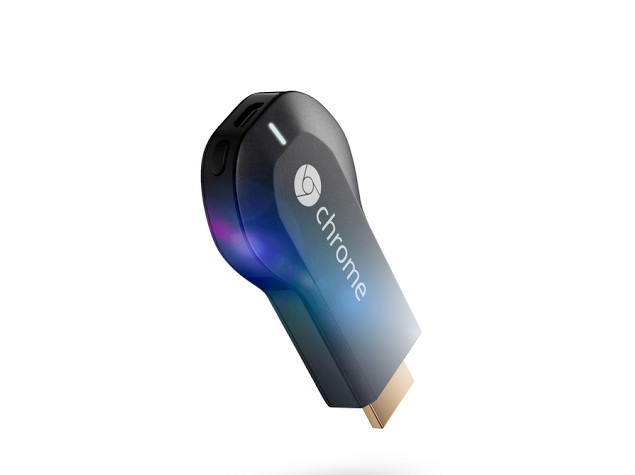 Google Inc. has unveiled a gadget that will lean on its widely used Chrome Web browser and take aim at Apple in the living room.

The new device, called Chromecast, is part of the company's attempt to make it easier for people to access Internet content on their TVs. Chromecast is a small stick roughly the same size as a thumb drive that can be plugged into an HDMI port on flat-panel TVs. It brings Netflix, Google's YouTube site and other Internet content to what is usually the biggest screen in households.

Forrester Research analyst Sarah Rotman Epps said Chromecast could undermine Apple in the still-nascent market to plug streaming devices into TVs, just as the Nexus tablets have siphoned some sales away from Apple's iPad.

Google's previous products designed to connect TV sets to the Internet haven't worked out well. The company initially tried to embed an operating system called Google TV into sets made by TV manufacturers, but that flopped. Last year, Google introduced an orb-like device called the Nexus Q in hopes of delivering more Internet video to flat-panel TVs, only to quickly pull the product from the market.

"Chromecast looks like a smart and disruptive device," Rotman Epps said. "Maybe it took the other failures for Google to get it right."

Google wants to have a presence on TVs because it could open up a lucrative new channel for it to sell more ads, which bring in most of its revenue.

In a show of its determination to make inroads on TVs, Google started selling Chromecast for just $35 on Wednesday. That price undercuts the most popular Internet-streaming devices made by Apple and Roku. An Apple TV box sells for $99, while the least expensive Roku box capable of showing high-definition video goes for $80. Roku, a company that formed within Internet video subscription service Netflix Inc., also sells an Internet streaming stick similar to Chromecast for $100.

Earlier this year, Apple revealed that it has sold more than 13 million of its streaming boxes. Roku said its sales of streaming boxes surpassed 5 million units this year.

The Chromecast device connects with smartphones, tablets and personal computers to beam Internet connect to TVs. The Apple and Roku streaming boxes rely on a standard remote control to select Internet content.

As an enticement to get people to try Chromecast, Google is offering three months of free Netflix service with a purchase of the Internet-streaming stick. That translates to a $24 value, leaving the cost of the device at $11 for those who would have gotten Netflix anyway.