Foxconn had pledged to create 13,000 jobs and build a $10 billion campus in Wisconsin. 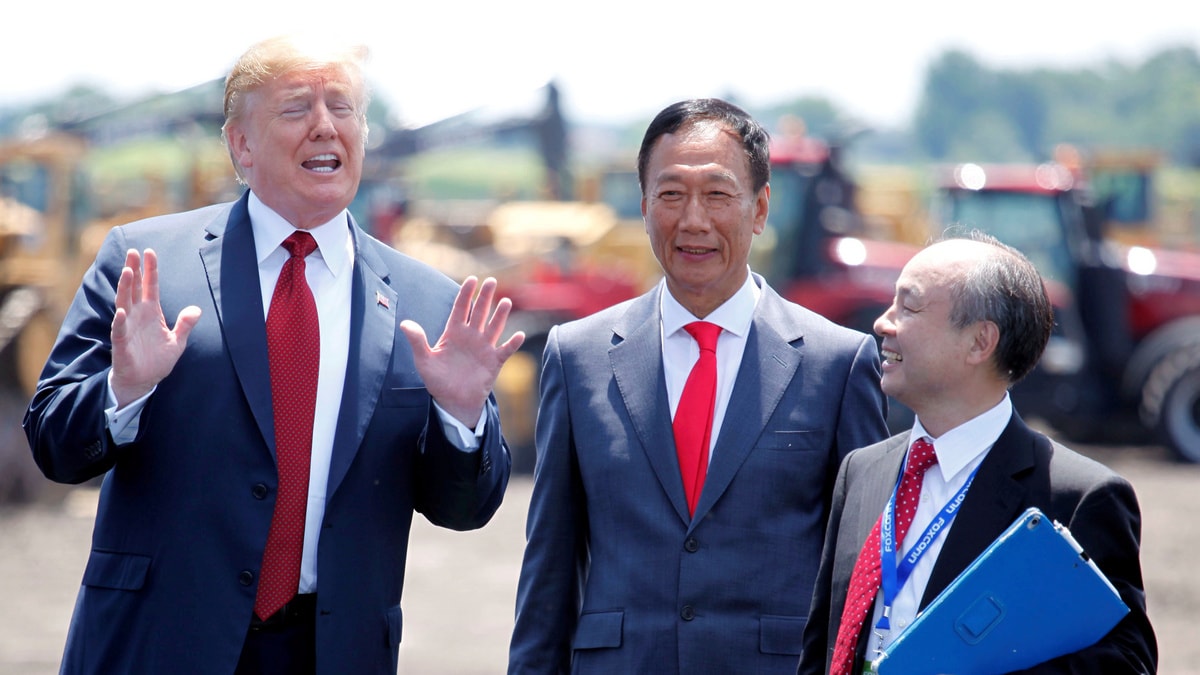 Foxconn Chairman Terry Gou met US President Donald Trump on Wednesday to discuss the status of the Taiwanese company's planned investment in Wisconsin, Foxconn and the White House said on Thursday.

Foxconn pledged to create 13,000 jobs and build a $10 billion (roughly Rs. 70,000 crores) campus in Wisconsin, but it has not met early hiring targets and has said it has been reconsidering its plans.

White House Press Secretary Sarah Sanders said in a statement that Trump met with Gou at the White House. She added without offering details that Gou was "spending a lot of money in Wisconsin and soon will announce even more investment there."

The Apple supplier said in a statement the two discussed the Wisconsin project and other issues.

Gou, a billionaire who said last month he would run for president of Taiwan in 2020, also told Trump he would seek US support for his country if he wins, The South China Morning Post newspaper reported. Gou said he would be a "peacemaker" and not a "troublemaker."

Sanders said Trump and Gou "did not discuss support for his campaign in Taiwan."

The United States has no formal ties with Taiwan but is bound by law to help provide the self-governing island with the means to defend itself. China, which views Taiwan as a renegade province, has never renounced the use of force to bring it under its control.

Wisconsin Governor Tony Evers told a news conference on Thursday in Milwaukee that he planned to meet with Gou later in the day.

Foxconn, formally known as Hon Hai Precision Industry, said last month it remained committed to its contract to build a display plant and tech research facilities in Wisconsin, days after Evers said he wanted to renegotiate the deal.

Evers, a Democrat who inherited a deal to give Foxconn $4 billion in tax breaks and other incentives when he replaced Republican Scott Walker in January, said he wanted to renegotiate the contract because the firm is not expected to reach its job creation goals for the state.

Wisconsin campus, announced at a White House ceremony in 2017, marked the largest planned greenfield, or start-from-scratch investment by a foreign-based company in US history and was praised by Trump as proof of his ability to revive American manufacturing. Trump attended a formal groundbreaking in June 2018.

Gou told Taiwanese media he invited Trump to come to Wisconsin next May when its production line will open and said Trump agreed.

But there is growing scepticism about the fate of the project.

In January, Foxconn said market changes "necessitated the adjustment of plans for all projects, including Wisconsin." The company told Reuters it planned a "technology hub" rather than a factory, and would hire mostly engineers and researchers rather than blue-collar workers.

After a conversation between Gou and Trump, the company said on February 1 it would still construct a factory but build smaller screens than initially planned.

Trump did not mention the project in a rally last week in Green Bay, Wisconsin.

Foxconn must meet certain hiring and capital investment goals to qualify for tax credits under the current contract.

It fell short of the employment goal in 2018, hiring 178 full-time workers rather than the 260 targeted, and failed to earn a tax credit of up to $9.5 million.