Company town of Sharp to bear the brunt of job cuts 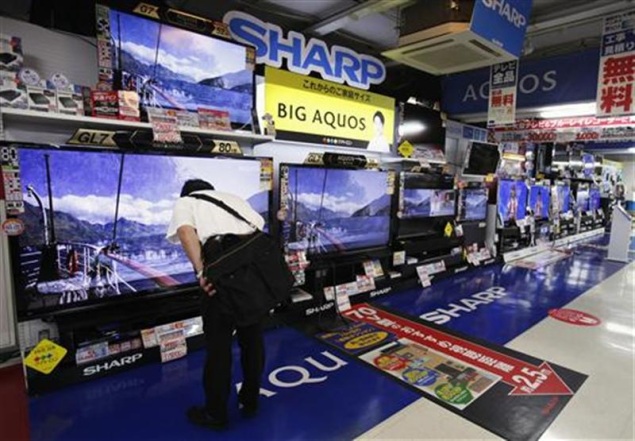 A small town north of Tokyo that Sharp Corp picked as the hub of its TV production during Japan's export boom four decades ago expects to bear the brunt of a round of job cuts intended to save the company.

As Sharp races to complete an emergency turnaround plan that includes the loss of 5,000 jobs, many people in Yaita, a fading former lumber town nestled between rice fields and woods two hours from the capital, are braced for the worst.

Yaita is an emblem of the decline of Japanese electronics manufacturing and the uncertainty that surrounds Sharp as the company negotiates a lifeline from Japanese banks and an investment from its Taiwanese partner Hon Hai.

Since early August Tadashi Endo, the town's mayor, has been working with an emergency team of officials to prepare its 36,000 residents for the closure of the plant, which employs 1,600 people.

The preparations began after an August 6 visit from Masayuki Mori, Sharp's boss at the factory that is Yaita's biggest employer, who told Endo the maker of Aquos TVs had no choice but to make its first redundancies in 60 years.

"I asked him how many and when," recalls Endo sitting in a meeting room at his office, behind him a Sharp TV built just down the road. "He wasn't able to tell me anything."

With losses mounting and cash reserves dwindling, Sharp may have no choice but to shutter the money losing facility.

Sales of TVs have plummeted in the face of competition from South Korea's Samsung Electronics and LG Electronics. It is relying on its main banks, Mitsubishi UFJ Financial Group and Mizuho Financial Group, to help it pay as much as 360 billion yen in short term loans and a 200 billion yen convertible bond due in September next year.

In addition to possibly selling it two overseas TV plants to generate cash, the pioneer of LCD TVs is seeking capital from partner Hon Hai Precision Industries  in return for making the Taiwanese firm its biggest shareholder.

Hon Hai, which agreed in March to buy a 10 percent stake for 67 billion yen, or 550 yen a share, is seeking better terms for that deal after Sharp's shares fell below 200 yen due to worse than expected losses.

The Taiwanese company's chairman, Terry Gou, visits Japan this week, with a joint statement on the progress of talks by the two companies slated for Friday.

Closing the TV plant would accelerate that decay, says the mayor, with everyone from taxi drivers and realtors to hoteliers and bar and restaurant owners feeling the pinch.

Endo, however, isn't going to try and stop Sharp from walking away. Beyond Yaita, unions more focused on winning big severance package than keeping jobs are also unlikely to stand in Sharp's way.

Hammered by the same market-grabbing tactics it once used so successfully and a persistently strong yen that drags on its competitiveness, Yaita's mayor says he feels pity rather than anger towards Sharp, which in the year to March 31 posted a record net loss of 376 billion yen.

Hollowing out
Century old Sharp is not the only company suffering in Japan's once unstoppable industrial heartland. In an echo of the earlier experience of manufacturing towns in U.S. "rust belt" states like Michigan or Ohio, ballooning losses and stretched finances at component fabricators and consumer electronics makers, and the plant closures that follow, are becoming more widespread, making once-rare large scale lay-offs common.

Around one in three televisions sold globally are made by a Korean company. This business year, Japan's big three set makers, Sharp plus Sony and Panasonic, expect to build 10 million fewer screens between them than in the previous year.

More recently, struggling Japanese chipmaker Renesas Electronics  told Reuters is was going to slash its workforce by as much as 12,000 people and sell its Tsuruoka plant in Yamagata, northern Japan.

The value of chips, televisions and liquid crystal displays churned out by Japanese factories is shrinking. In 2011 it totalled 13 trillion yen worth of goods, according to Japan Electronics and Information Technology Industries Association. That figure compares with 20 trillion yen in 2006 and 26 trillion yen in 2000.

Shrinking workforce
Membership in the Japanese Electrical, Electronic and Information union, the largest of the umbrella labour groups representing workers at Sharp, Sony and other companies, has fallen from a peak of 800,000 reached 15 years ago to 600,000, according to Masashi Okamato a senior official at its headquarters in Tokyo.

"Membership goes up and down in line with the value of the yen," he said. "We recognise that companies have to make choices, focus on some areas, they have to find a way to remain as going concerns."

While the union is ready to bow to the inevitability of lay-offs, Okamoto and his colleagues expect Sharp and other firms to cough up generous severance packages in return. For workers in their 40s, the union official says, that means up to three years salary.

It makes downsizing in Japan expensive. Of the 5,000 workers Sharp plans to let go, around 3,000 could be through voluntary retirements, sources earlier told Reuters. In June the average Japanese manufacturing worker earned $7,000, giving an annual income of $84,000. Three times that wage level times 3,000 people comes to $756 million.

It's why most companies that cull their payrolls take aim at people who are 55. Because they are only five years away from getting their state pension it costs only a year's salary to persuade them to exit, explained Okamoto.

Spreading despair
Saving jobs, says Okamoto is a task for the government. A 500 billion yen state fund this fiscal year designed to help companies build new factories has, he says, safeguarded some 30,000 jobs.

A state-led takeover and merger last year of the small LCD operations of Sony, Toshiba and Hitachi into Japan Display has also helped keep jobs from heading overseas.

But repeating the feat in TV seems less feasible. While Japan Display is able to tap into a growing market for tablet computers and smartphones, including the latest Apple iPhone, TV is a sunset industry. Forging a national television champion out of remaining assembly plants would be tough, said an official from the country's Ministry of Economy, Trade and Industry, speaking on condition he was not identified.

Neither, says the union's Okamoto, are bureaucrats and politicians addressing the root cause of Japan's hollowing out; a strong yen hovering around 80 yen to the dollar and 100 yen to the euro.

Back in Yaita, the mood of surrender spreads beyond the mayor's office, where previous factory managers, Sharp's president, Takashi Okuda, and chairman, Mikio Katayama among them, have sat in more prosperous times.

Close to the plant, at a small eatery selling Chinese-style noodles and fried dumplings, the proprietor, Norio Innami, 62, shrugs his shoulders.

"There isn't much we can do about it," says Innami, who estimates that Sharp workers who come in at lunchtime account for a 10th of his business. "It'll probably end up closed, and Sharp will probably end up being owned by the Taiwanese."