Chromecast with Google TV is expected to be launched on September 30. 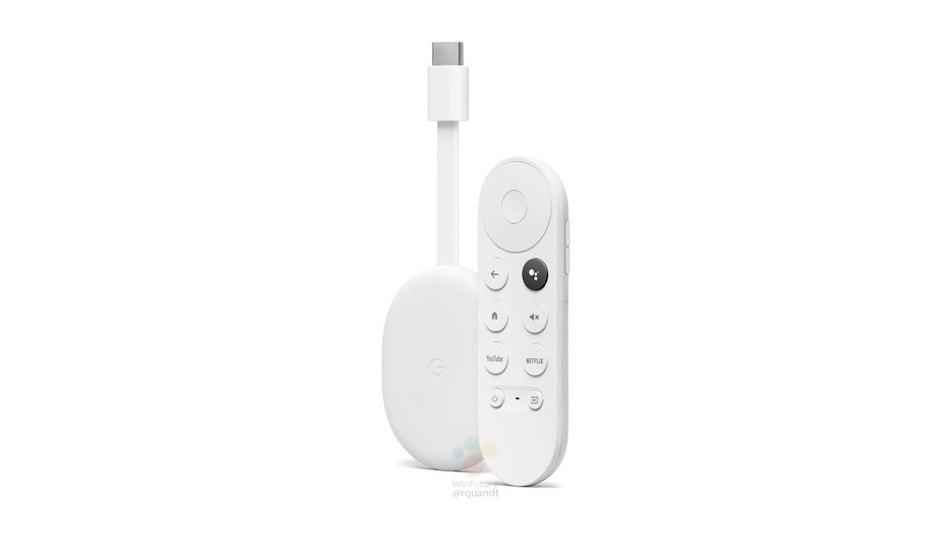 Chromecast with Google TV, a streaming dongle for TVs, has long rumoured to be in the works. This dongle is reportedly codenamed Sabrina and believed to be launching on September 30. Ahead of the launch, official-looking renders, specifications, and features of the new Chromecast dongle have surfaced online. Additionally, the price and release timeline has also leaked. If the leaked information is accurate, Chromecast with Google TV will be a big upgrade over the last Chromecast.

WinFuture has shared leaked images of the upcoming ‘Google Chromecast with Google TV', along with its features, expected price, and probable launch date. As mentioned earlier, the streaming device is expected to launch on September 30. Citing internal sources, the publication claims that the Chromecast with Google TV will be priced around EUR 100 (roughly Rs. 8,700), whereas other sources have indicated that it may be priced for as low as $50 (roughly Rs. (3,600).

Chromecast with Google TV leaked renders suggest that it will carry an HDMI port and a remote control to operate all the streaming apps and services. The remote is tipped to have dedicated Netflix and YouTube buttons, a D-Pad, navigation controls, a dedicated Google Assistant button, and volume buttons on the sides. There is also a back button and an on/off button that allows users to switch the Chromecast with Google TV off when required. In the current Chromecast range, the option to switch off the device is not included.

This new streaming dongle is reported to support full-fledged streaming service apps and come with a revised Android TV interface. This dongle can be attached to a TV or display and it can be used to access various apps and services using the remote. The upcoming Chromecast with Google TV has an oval-shaped body that has a LED status indicator at the back, and a reset button as well.

Lastly, the Chromecast with Google TV is reported to be powered by Amlogic S905X2 quad-core SoC, paired with 2GB of RAM.