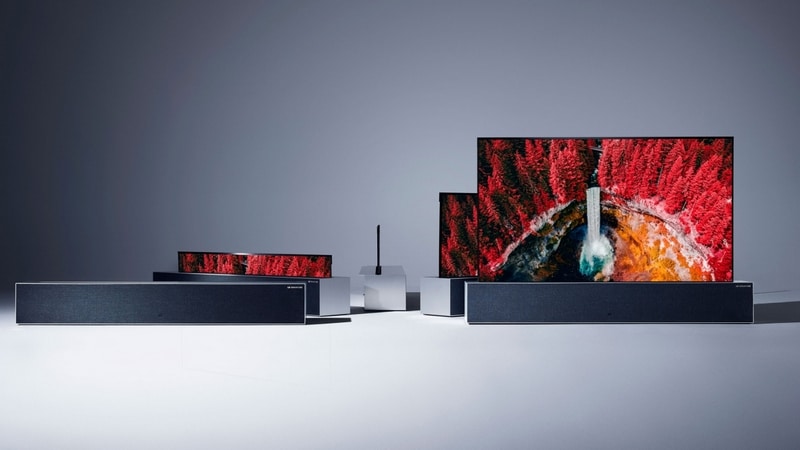 CES 2019 saw LG unveil a rollable TV that will be available commercially.

LG at CES 2019 on Monday unveiled a roll-up television screen as a trend of bendable displays began taking shape at a consumer electronics extravaganza in Las Vegas. An ultra-high definition LG Signature television that rolls into and out of a base stand - which also serves as a sophisticated sound bar - was among the stars at the South Korean consumer electronics titan's press event on the eve of the official start of the Consumer Electronics Show (CES) 2019.

"It brings freedom of design to a space, without the limitations of a wall."

A demonstration showed that the 65-inch (165 centimetre) screen could disappear completely into the base, extend just part way to display photos, act as a control screen for smart devices, or rise completely for full viewing.

"It looks very cool, and interior designers are going to love it," GlobalData research director Avi Greengart said of the roll-up television.

"This is unique technology; you are going to want this."

Apple on screen
All of LG's new OLED televisions, including the roll-up model, will be infused with Google Assistant and Amazon Alexa virtual assistant software as well at Apple AirPlay software.

"We are really excited to be one of Apple's first TV partners for AirPlay Video," said LG senior director of home entertainment product marketing Tim Alessi.

LG rivals Samsung and Vizio have also announced they are building AirPlay into televisions, in a trend Greengart considered intriguing.

"You will be able to push content from your iPhone to the television set, so iTunes users should see a lot better access to their content," the analyst said.

The television alliances also promised to play into Apple's efforts to build up the services and digital content part of its business.

LG did not disclose pricing for the roll-up television.

Bendable and foldable screens were expected to be among the technology trends on display at CES, which opens officially on Tuesday.

Startup Royole was on hand with its folding mobile device screen technology, and Samsung was expected to show off a new version of a folding smartphone.

"Foldable phones is going to be a big trend this year," Greengart said, noting that most of new product announcements of that ilk were likely to be saved for the upcoming Mobile World Congress.

He expected the challenge to folding smartphones to be on the software side, not with the displays, since applications will have to be designed to adapt to going from phone to tablet screen sizes.