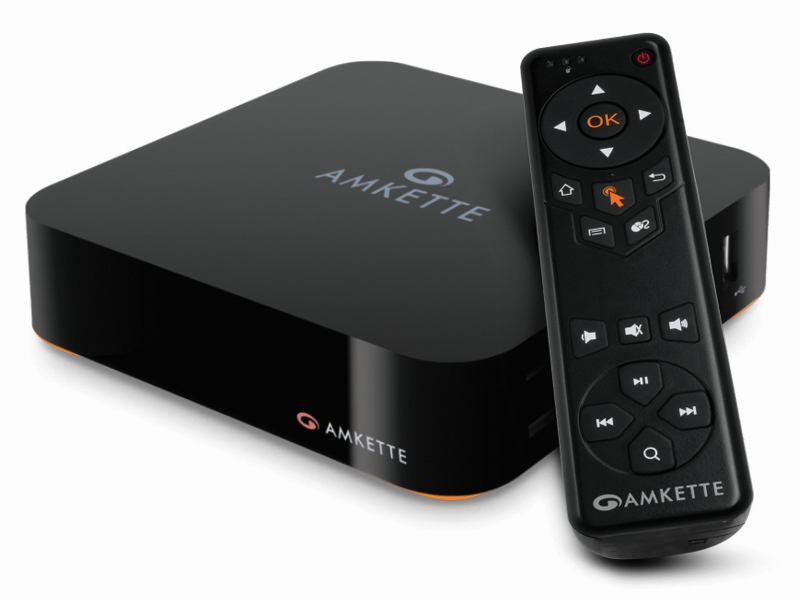 Amkette on Thursday launched the EvoTV 2 advanced streaming and smart media player in India. The device costs Rs. 6,999 and is exclusively available from Snapdeal at a discounted price of Rs. 6,499.

The Amkette EvoTV 2 gives users access to almost 200 apps letting them view movies, songs, and play video games. For those who follow TV shows, the company says its EvoTV 2 lets them view all the global and local shows as with any other streaming device in India. "So next time when you need to watch the next episode of Game of thrones (uncensored), you know that EvoTV 2 is a must have device for you," says the company.

The streaming device is powered by a quad-core processor along with a Mali 450 3D GPU and a HD decoder for quick playback. It also has a Smart Interface for users to add or select their favourite applications for quick and easy viewing of shows. Users can download content from the company's own dedicated store - the EvoTV 2 app store. It bears 8GB of inbuilt storage. Ability to cast YouTube videos, connect a 2TB hard disk for playing content, and stream content directly from smartphone or laptop is also present. One can also download content using apps like Torrent and store it in an external hard drive too.

The company has also detailed which popular apps and channels will be available on the media streaming device, such as Voot, Eros Now, Colours, Star Sports, HBO Originals, Sony Liv, Star World, Aaj Tak Live, Soundcloud, Saavn, NDTV, Times Now, and BBC News. Popular shows that will be accessible via the apps and channels include Naagin, Ye Hai Mohabbatein,

Kumkum Bhagya, Bahu Hamari Rajni Kant, Saath Nibhaana Saathiya, MTV Roadies X4, Siya ke Raam, The Kapil Sharma Show, and Diya aur Baati from the regional side, and Atelier, Game of Thrones, House of Cards, The Walking Dead, Sherlock, Silicon Valley, Ballers, Veep, So You Think You Can Dance, and The Newsroom from the international side.

"The digital entertainment is coming of age in India with multiple Over-The-Top (OTT) services announcing the availability of wide variety of local and global content. Many of these services use different technology platforms, making it difficult for consumers to access content using one device. EvoTV 2 has been designed to allow easy consumption of wide variety of content from anywhere on cloud or any user device like smartphone, laptop, or PC. The Amkette EvoTV 2 provides a house full of entertainment at a very affordable cost and with an extremely easy user interface," said Rajiv Bapna, Director, Amkette during the launch.

Volkswagen Says Not in Talks With Apple or Google
Lenovo Says Sold 500,000 Vibe K4 Note Units in India Since January