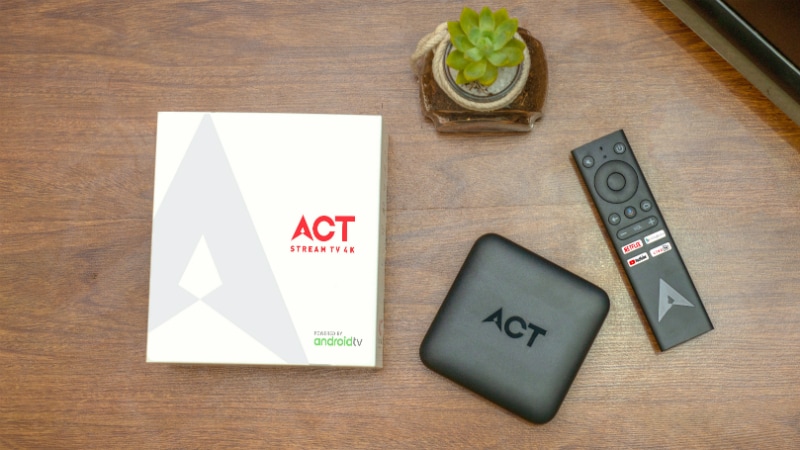 ACT Fibernet on Tuesday launched the ACT Stream TV 4K media streaming device in India. Taking on the likes of Amazon Fire TV Stick and Google Chromecast, the 'OTT TV streaming box' will enable content streaming through services such as Hotstar, Netflix, Sony Liv, and YouTube among others. The Bengaluru-based company claims that customers will also be able to watch over 100 of their favourite free-to-air (FTA) TV channels through the ACT Stream TV 4K device. Further, the device, which runs Android 9 Pie, will provide access to over 3,000 TV apps through the preloaded Google Play.

Priced at Rs. 4,499, the ACT Stream TV 4K is will be available commercially in May. ACT Fibernet, however, is set to provide the ACT Stream TV 4K complimentary to select 5,000 customers as an introductory offer. Customers are also touted to receive exclusive offers, including discounted rates on various video-on-demand (VOD) apps, extended trial periods on content apps, and free access to pay-per-view content.

ACT Fibernet has offered Dolby Pass-through on the ACT Stream TV 4K. The device is also capable of offering voice search through a Google Assistant integration. Additionally, users can connect their external devices, including hard drive, joysticks, and Web camera.

The ACT Stream TV 4K box comes bundled with a remote control unit that enables wireless controlling of various functions. The device runs Android Pie and comes with Google Play support. Also, as we mentioned, it provides access to stream content through services such as Hotstar, Hooq, Netflix, Sony Liv, YouTube, and Zee5 among others.

Customers have also been provided with a single-click subscription feature. This will enable subscription to premium content from existing OTT streaming partners and channels that have partnered with ACT Fibernet.

ACT Fibernet says that the subscription amount of OTT streaming partners and channels will be included directly in the monthly bills of ACT customers. Notably, the company announced the integration of monthly Netflix subscription within its native billing service last month.