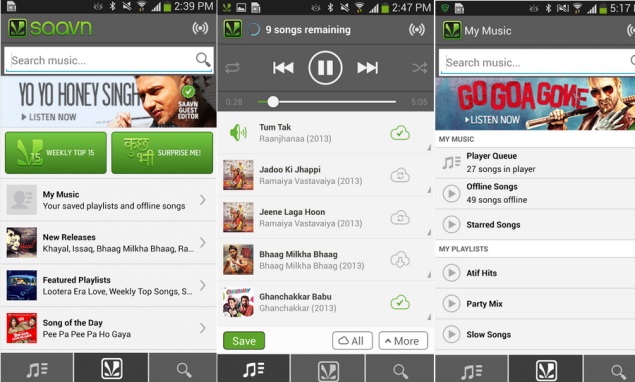 Saavn on Monday announced a deal that brings all of T-Series' music content to Saavn's mobile streaming service in India. Over 133,000 tracks from T-Series will now be available for Saavn's listeners on mobile devices in India.

Speaking about the alliance, Bhushan Kumar, Chairman and Managing Director of T-Series, said, "We are excited to bring the full T-Series catalog to Saavn, the premiere South Asian music service, for mobile streaming in India. Legit music streaming services are making dedicated efforts in fighting piracy by providing a fast, simple, and legal alternative, which we support fully. We are happy to make our music available to a broader Indian audience via Saavn Music for mobile devices."

T-Series' catalog - which was already available on Saavn's website - includes Bollywood, Hindi, Punjabi, and Bhojpuri music in several genres, including Film, Pop, Devotional, and Instrumental. Along with Sony, Aditya, Tips, Unisys, Yash Raj, Universal, Warner, and EMI, T-Series is one of the major music players in the country to have tied up with Saavn.

"We are proud to present T-Series' vibrant catalog to our mobile listeners in India, and to expand our partnership with one of India's premier labels," said Paramdeep Singh, Executive Chairman and Co-Founder of Saavn. "Listener demand and communication around these songs has been unprecedented, and we are thrilled to be able to answer that call with T-Series, fulfilling our mission of bringing the best music to our users, everywhere."

Foursquare Details Key Features of Swarm App Ahead of Its Launch
Intex Aqua i5 HD With 13-Megapixel Camera Launched at Rs. 9,990