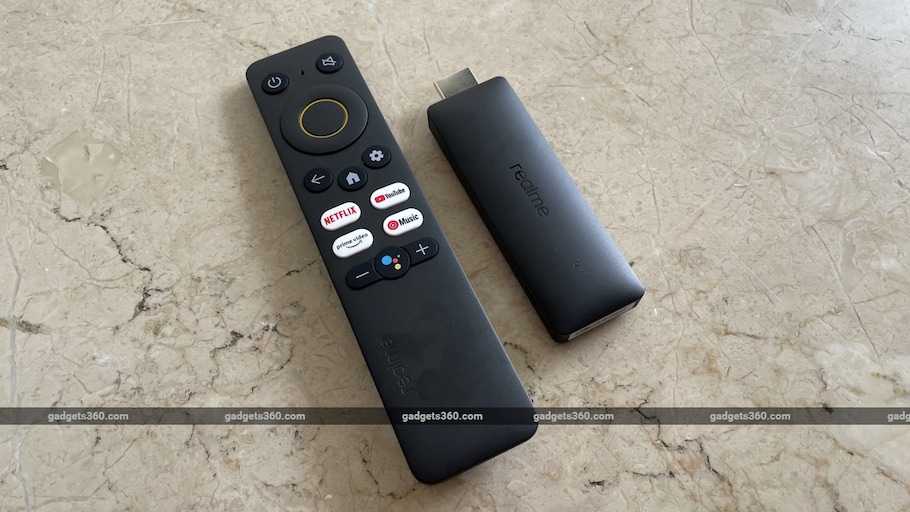 Source: A good streaming device can bring out the best in your TV
Highlights

In this update, we've added the Realme 4K Smart Google TV Stick, which is unique in that it runs on the Google TV user interface which was launched with the current-generation Google Chromecast. Although there are some shortcomings with this device – its lack of support for Dolby Vision HDR, in particular – the modern UI helps make this a formidable streaming device compared to similarly priced options.

A lot of people might be happy with watching regular TV programming using a set-top box, and indeed the quality of content on most TV channels is much better today than it was a few years ago. Movies, sports, music and the news are all there, but the biggest problem with this method of accessing content remains the schedule. You need to tune in at the right time, or make do with whatever is playing when you do tune in.

However, many are now opting for a more convenient way to watch video content — streaming. The easiest way to access video content is through an app on your smartphone, which can either use mobile data or connect to Wi-Fi to access the content you want. But the biggest issue with that is the screen —it's too small and doesn't make for a great viewing experience.

That's where streaming devices come in. These small gadgets only need power and a Wi-Fi connection to fetch online content from free and premium streaming services, letting you access a massive catalogue of quality video content that includes TV shows and movies, while enjoying the viewing experience on your big-screen TV.

Why should you buy a streaming device?

The best reason to buy a streaming device is to enjoy on the big screen the wide variety of content on offer on streaming services right now. While a lot of really good TV shows and movies can be viewed on traditional cable or DTH TV, some of the best new TV shows are being released by streaming services that double-up as production houses; shows such as Narcos: Mexico, The Grand Tour, and The Book of Boba Fett, as well as movies such as Army of the Dead and Gehraiyaan were released exclusively on streaming services such as Netflix and Amazon Prime Video.

Furthermore, popular shows such as The Book of Boba Fett can be watched first on streaming services, even before they are aired on TV in our country. Apart from these, there are also numerous other popular shows and movies that are available to watch on-demand on streaming services, so you can choose when to watch whatever you want to watch. The shutting of movie theatres due to the Covid-19 pandemic has also seen major releases such as Gehraiyaan go straight to streaming platforms.

You can even pause when you need a break, or watch an entire series in one go rather than wait and watch an episode every week. The idea of streaming suits anyone with a busy and unpredictable lifestyle.

Streaming devices only need a good Internet connection at home and the right TV to make the most of the features of whatever device you buy. If you have a 4K HDR TV, it would make sense to opt for a device that supports 4K streaming. It's also worth picking your device based on the streaming services you intend to access; make sure the services you use most often have proper apps on the streaming device you pick. You can also pick up a media streaming device if the software on your smart TV is feeling outdated or buggy.

The Fire TV Cube (2nd Gen) supports the Dolby Vision and Dolby Atmos formats for high dynamic range and sound encoding respectively, and runs the updated Fire TV user interface. The streaming device supports all major apps, including Amazon Prime Video, Netflix, Disney+ Hotstar, YouTube, and Apple TV. While Amazon's own Prime Video tends to be highlighted on the user interface, it's easy and convenient to access content from various other services as well, with excellent apps available for the interface.

Priced at Rs. 12,999, the Amazon Fire TV Cube (2nd Gen) is quite expensive, and costs considerably more than the Rs. 5,999 Amazon Fire TV Stick 4K. The latter largely has the same capabilities when it comes to core functionality, also supporting 4K streaming, as well as Dolby Vision and Dolby Atmos. You could also consider the Fire TV Stick 4K Max, which is a bit more powerful than the Fire TV Stick 4K in terms of processing power, and also benefits from better connectivity with support for Wi-Fi 6 routers.

However, the Fire TV Cube is considerably more powerful in terms of the hardware, and hands-free voice assistance from Amazon's Alexa makes this worth it for power users. The hands-free functionality works well, and can be used for a number of purposes, including controlling the TV or home entertainment setup.

Although you can connect it to just about any television and enjoy the benefits, the Amazon Fire TV Cube (2nd Gen) is best used with a high-end home entertainment setup that includes a soundbar, or AV receiver and multi-speaker system. You can use the device to not only add hands-free voice capabilities to your existing home entertainment setup, but also as a capable streaming source device that can send the best possible signal to your system.

If you don't have a 4K or HDR TV, you might prefer the Amazon Fire TV Stick (3rd Gen). It's considerably more affordable than the 4K version at Rs. 3,999, and was launched in late 2020 with new hardware, and now sports the new Fire TV UI. While the device obviously does not support Ultra-HD streaming like the 4K version, this should be fine as long as you're using it with a full-HD television.

If you're looking to save a bit more money, the Amazon Fire TV Stick Lite is priced at Rs. 2,999, and offers most of the capabilities of the Fire TV Stick (3rd Gen) including full-HD streaming and access to all of the apps and services available on the Fire TV UI. Furthermore, the Fire TV Stick range now supports Miracast screen mirroring too.

If you're an Apple fan, and are heavily invested in Apple's software services, the Apple TV 4K (2nd Gen) is probably on your wishlist. Priced at Rs. 18,900 onwards in India, this streaming device runs on the company's tvOS platform and features a new and improved remote for easier navigation and voice controls through Apple's Siri voice assistant. Under the hood is the Apple A12 Bionic processor, which although a bit dated, has enough power for the streaming and gaming capabilities of the Apple TV 4K.

What makes this streaming device special is that it is not only very good at its core capabilities, but also a pretty interesting casual gaming device, thanks to the Apple Arcade subscription service. For its core video streaming functionality, you get access to Apple TV+, Netflix, Amazon Prime Video, Disney+ Hotstar, and a number of other popular services.

The Apple TV 4K is particularly special if you're already using the Apple ecosystem – both hardware and software considered. AirPlay support means that the Apple TV 4K will work well to mirror your iPhone, iPad, or Mac computer's screen onto your TV, and Ultra-HD with Dolby Vision HDR support lets you get the best out of streaming content.

Perhaps the only thing holding this device back and keeping it from being our top pick is its price. At Rs. 18,900 in India for the 32GB version, the Apple TV 4K (2nd Gen) is much more expensive than most streaming devices available today, while offering capabilities that aren't significantly better. However, if you do have the budget, it offers an excellent usage and streaming experience.

The Realme 4K Smart Google TV Stick is priced at Rs. 3,999, and is among the first devices of its kind in India to run the new Google TV user interface for Android TV. Powered by Android TV 11 with the new user interface introduced on the latest Google Chromecast, this streaming device supports Ultra-HD video with HDR up to the HDR10+ format.

Although Dolby Vision support is lacking, the software and excellent content curation of the Google TV UI will help to improve the streaming experience, especially if you're still using a non-smart TV, or aren't happy with the software and UI performance of your smart Ultra-HD TV. While we did experience some bugs in the usage experience, on the whole the Realme 4K Smart Google TV Stick is well worth considering.

There is a lot of competition in this price segment, particularly from Xiaomi and Amazon. However, the small form factor of the Realme 4K Smart Google TV Stick, its good remote, and the excellent Google TV UI make this a worthwhile device to consider if your budget is less than Rs. 5,000.

How we picked the best streaming device

We've extensively used these products ourselves, and have crafted our recommendations based on our experiences with the products and what we believe are the best in terms of value-for-money and functionality. We've also used and reviewed a number of competing products in this segment, and have added these to our recommendations along with our long-term experiences with smart TVs and media streaming devices.

Alternatives to these streaming devices

Various other streaming devices are now available in India, with many of the most affordable options essentially just enabling screen mirroring from smartphones or computers. If you have the ability to shop outside India, options such as the Roku range and NVIDIA Shield TV might also be worth considering.

Xiaomi has two excellent streaming devices also available in India: the Mi Box 4K and Mi TV Stick. The former is very capable and also has USB support to function as a media player, but the larger form factor and the fact that you have to plug it into a power outlet makes it a bit less convenient. The Mi TV Stick is worth considering if you have a full-HD TV, but its sluggish performance and basic remote hold it back a bit.

You can also use a gaming console to stream movies and TV shows. Modern consoles such as the Sony PlayStation 5 and Microsoft Xbox Series X support 4K HDR and have dedicated apps for streaming services.

You could also buy a smart TV with a good operating system such as Android TV or webOS, and you wouldn't need a separate streaming device at all. Finally, using an HDMI cable to connect your laptop or computer to your TV is the most affordable and arguably the easiest way to add smarts to a big screen. You can simply stream content through dedicated apps or a Web browser, and watch it comfortably on the big screen.