Who Is the Worst Star Wars Movie Character? It's Not Jar Jar Binks 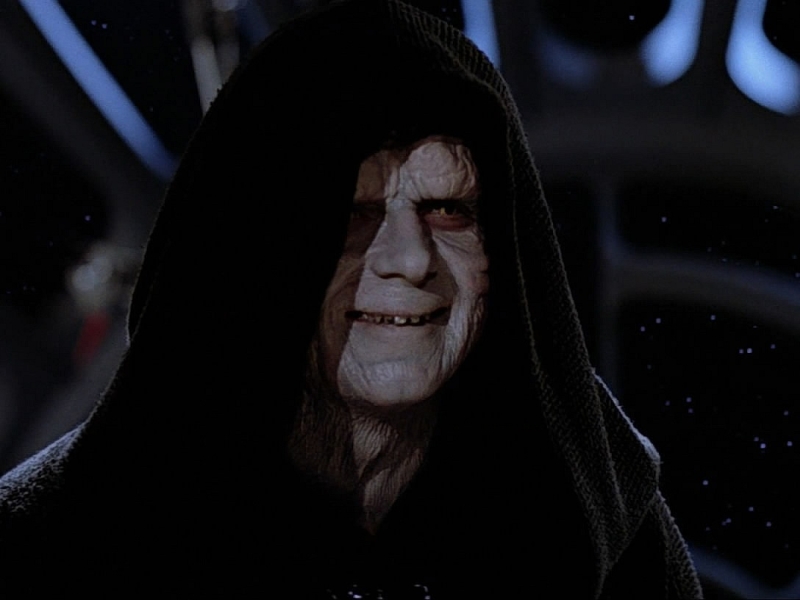 It's been nearly 40 years since the first Star Wars released. The seventh film in the series is out now in some parts of the world, but here in India, we have to wait until Christmas to see the movie, as Disney didn't want to get into a box office brawl with Dilwale on the one hand, and Bajirao Mastani on the other. The newest Star Wars film, The Force Awakens, is set 30 years after the events of Return of the Jedi, and is largely establishing an all new roster of characters, though some fan favourites, including Princess Leia, Han Solo, Luke Skywalker, Chewbacca, as well as R2D2 and C3PO are also returning.

That these characters have endured and remain popular even after so many years is a testament to their appeal, but over the years, we've really managed to forget many of the horrible characters that littered the movies as well. When you ask anyone who the worst Star Wars character is, people jump to Jar Jar Binks, from the prequels, but really, that just became a meme, and is easy to repeat. Actually though, even if you restrict yourself to just the movies, there are plenty of characters who were badly written, annoying, or just the worst. When we started putting together this list, we were worried that it's going to be a roll call of characters from the prequels, but to our surprise, the list was actually pretty evenly balanced between the old and the new films. Here are our picks for the worst characters to have lived a long time ago, far far away.

10) Luke Skywalker
Okay don't jump straight to the comments and start abusing us yet. Luke Skywalker was one of the coolest characters in the series, and over Empire Strikes Back and Return of the Jedi, we would watch him grow and evolve right in front of us, and become a real badass. But Luke Skywalker in the first Star Wars film was the most annoying teenager to have ever been created, complete with the perfect earwax melting whine about wanting to go hang out with his buddies, instead of doing chores around the house. 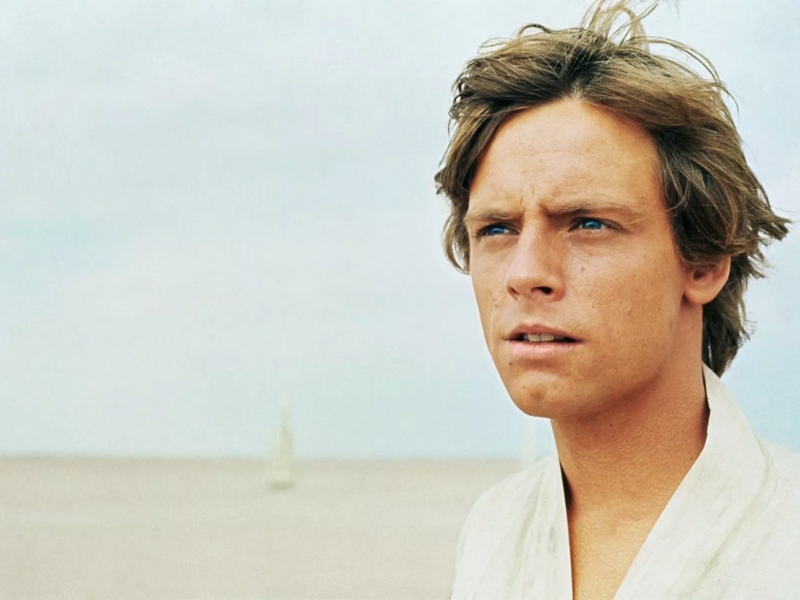 In A New Hope, Luke Skywalker was inconsequential, and did little other than get into situations he didn't understand and couldn't deal with. His actions led directly to the deaths of his uncle and aunt, not to mention Obi Wan Kenobi, and he spent the entire movie in a passive reactive state. And sure, he blows up the Death Star at the end - but that barely felt like an earned moment, as we never really saw him learning to use the Force - he just went from whiny farm boy to ace pilot with no development along thhe way.

9) Boba Fett
If you didn't abandon us after that last entry, there's a pretty strong chance that you're going to jump ship now, but hold on. Yes, everyone agrees that Boba Fett is awesome; he's so awesome that if you read the books, you know that he punched his way out from the inside of a sarlacc, and has successfully taken on just about everyone in the galaxy by now. But we're restricting this to the movies, and there, what exactly does Boba Fett accomplish? 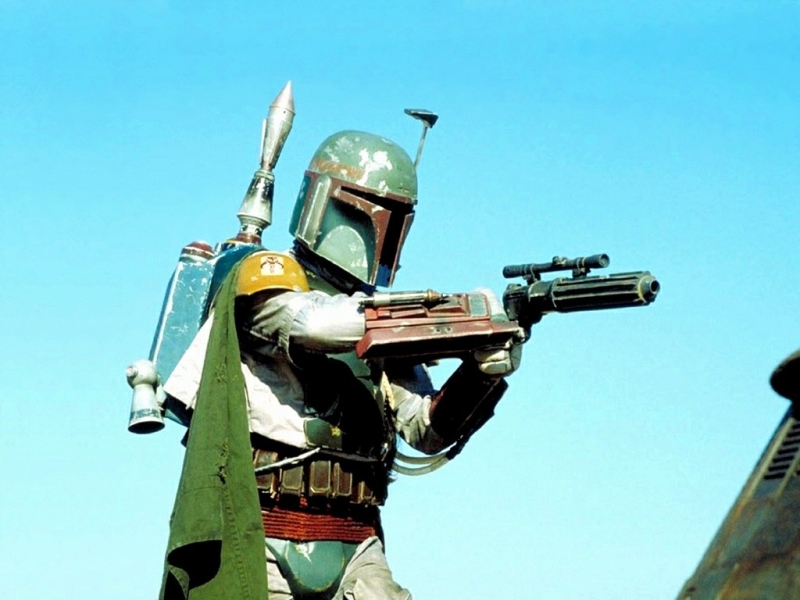 He carts Han Solo's frozen body like he's a Fed Ex agent, after the Empire does all the hard work; and then he just lounges around Jabba's Palace, before being taken out by accident. That's how little of a badass Boba Fett really is - he could be taken down by someone who wasn't even trying!

8) Darth Maul
Darth Maul is another character that people think is pretty awesome but in his case, it's only because there's very little to like from the prequels, so we latched on to the one thing that at least looked a little cool. The Zabrak certainly looks cool with his red and black face and horns, and his double bladed lightsaber was pretty awesome too. Until he actually starts fighting with it, twirling around like we got bored and changed the channel from Star Wars to Crouching Tiger, Hidden Dragon. 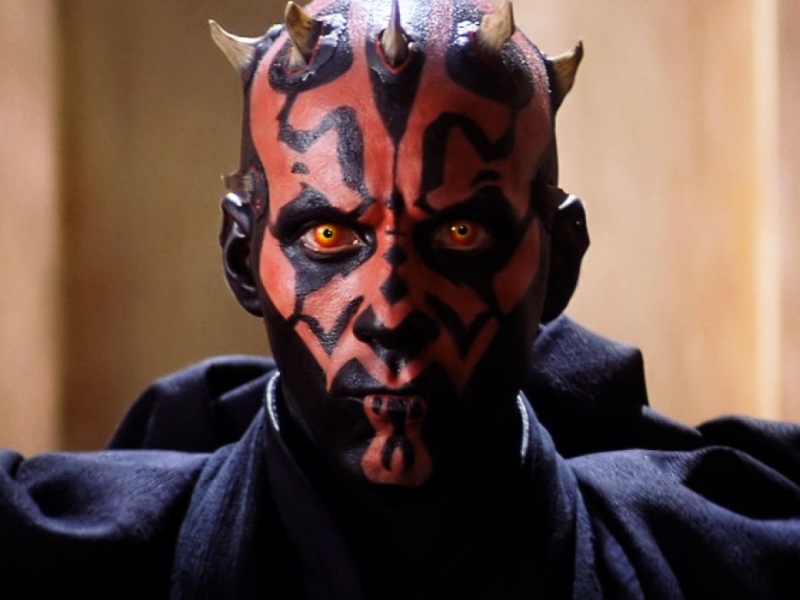 Kung Fu movies are awesome, and Star Wars is awesome, but blending the two together was just an awful idea. The number of pointless spins that exist to justify Darth Maul's double sided lightsaber aside, he's another character who spends a lot of time looking menacing, only to go down like an idiot. Yes, he does take out Qui Gon Jinn with a particularly enthusiastic spin, but once he's got Obi Wan down, hanging from the edge of the platform by his fingertips, Maul just paces and slashes at the floor like a bored six year old? At that point, he honestly deserved to die.

7) General Grievous
Giant, skeleton robot mix with creepy crazy eyes, four arms, and each one has a lightsaber that he collected from a jedi he killed? Yes! General Grievous, like Darth Maul, was another character that looked amazing. Like many other aspects of the prequels, more time and effort went into making things look good, than into having them make sense or add to the story. 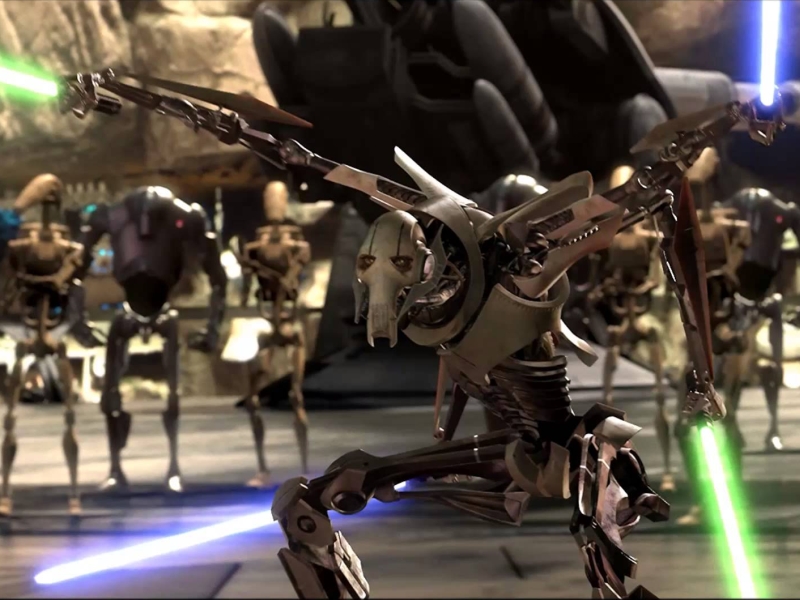 Grievous has a smokers cough, wheezes and creaks, and while he isn't the worst thing to happen to these movies by a long shot, if you want to see how the character should have been handled, watch the Clone Wars TV show instead. In the context of just the movies though, Grievous definitely belongs on this list.

6) Nute Gunray/ Watto
Both characters are lazy, barely written, have no real explanation for their actions or motivations, and are also horrible, terrible, no good racist caricatures. There's not much else that honestly needs to be said about these characters, except to say that it's wonderful that they had small parts to play, so we didn't have to see too much of them. 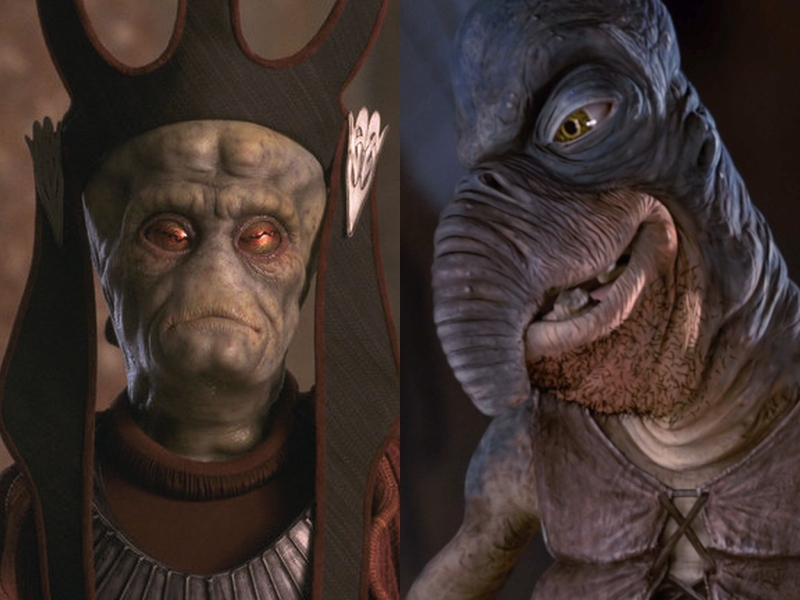 5) C3PO
The fussy golden robot is actually quite pointless to the films, and having recently rewatched the original trilogy, we can say that he is also consistently annoying throughout. Combine that with the extended backstory established in the prequels, and we have to wonder why the character wasn't just cut. There's nothing accomplished by having him around, and surely no one loved him so much that they never though of cutting him from the script? 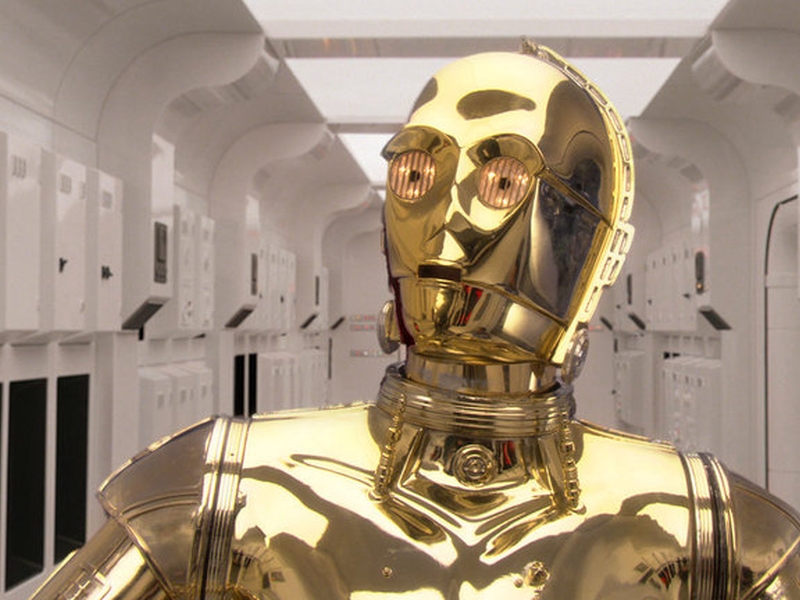 Not only does C3P0 behave annoyingly, but he's also often dead wrong about all the things he does, and contradicts himself from scene to scene, which seems to be a strange trait to program into a robot.

4) Salacious Crumb
Ugly character design and annoying closeups made us really hate Jabba's lizard-monkey-thing pet. Finding out that its name was Salacious Crumb settled matters. Showing good characters as beautiful (or at least cute) and evil characters as ugly (or frightening) is an annoying visual shorthand and one that really should be dropped. And the same is true for Crumb - it should ust have been dropped from Return of the Jedi. 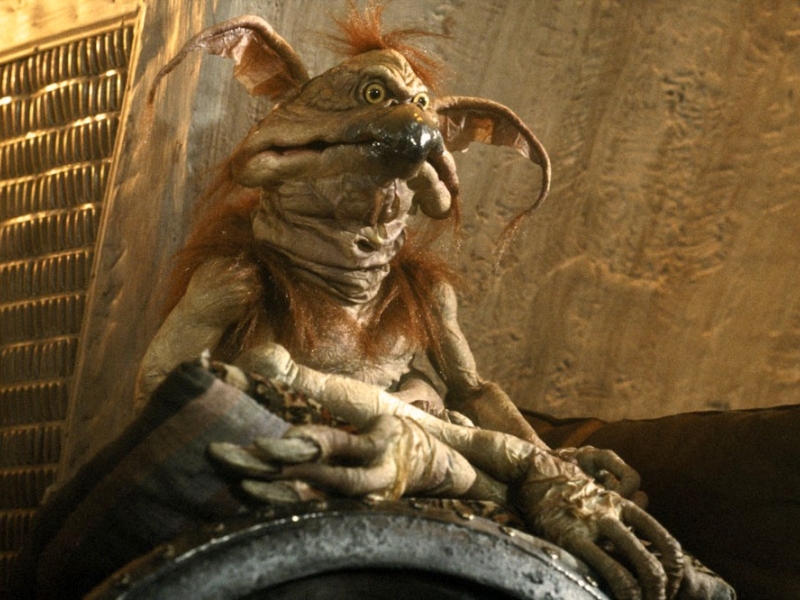 3) Jar Jar Binks
Obviously Jar Jar would be on this list - and fairly high up too; people didn't hate the character for absolutely no reason. But his sins actually fall in line with many of the other characters on this list - from the lazy writing to the ridiculous accents to the clunky humour, everything feels forced, but the reason we hate Jar Jar is because we were clearly supposed to love him, which is why he was consistently being thrust in our face. 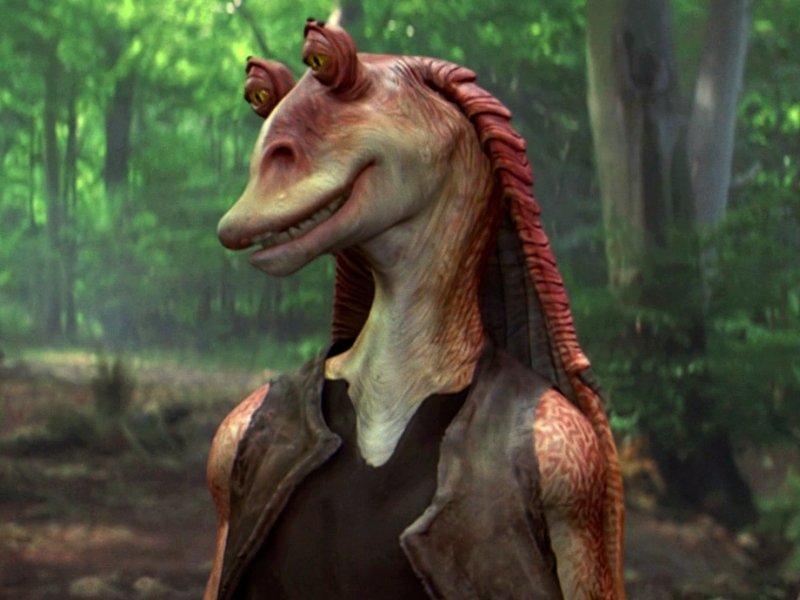 2) Boss Nass
The Gungan leader just really bothers us - he can't talk without spraying spittle all over his visitors, and he appoints generals with all the care we'd apply to picking socks. He's grating, annoying, and because he's one of the "good" guys, he gets a fair amount of screen time. The reason Boss Nass is higher up in the list than Jar Jar is that he's supposed to be in charge, and therefore we should blame him for getting so much Jar Jar. 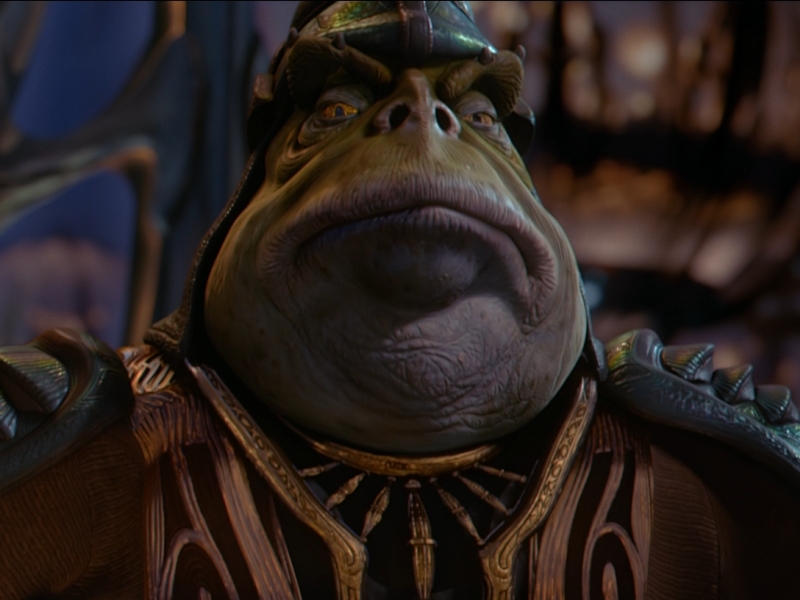 He could have assigned one of his trusted soldiers to escort the Jedi to the Naboo, or named someone else as the Gungan's representative to the senate - someone with a brain, wouldn't hand over the reigns of power to Palpatine. All of that can be placed at Boss Nass' door, so we're going to blame him for a lot that we hated from the prequels.

1) Ewoks
The Ewoks are the worst thing to happen to Return of the Jedi. That is something most people agree with; however, in the logic of the series, we'd say that the Ewoks are one of the most annoying things in the entire series so far. That extended battle sequence on Return of the Jedi, where the Ewoks blaze through the Empire's troops, is a cringeworthy sequence that has brought out the most shameless defences and convoluted reasoning from diehard fans who won't admit any shortcomings in the original trilogy. 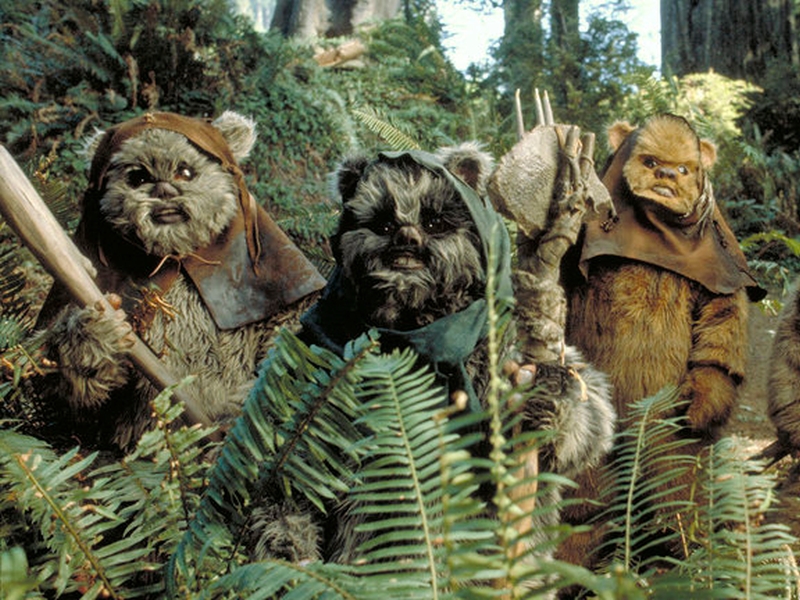 The Gungans also have a similar sequence in the prequels, but at least they're not forest dwellers with no technology to speak of. The Ewoks on the other hand, have stones and rocks, and they beat the best the Empire had to offer. So say what you will about Jar Jar Binks, but the Ewoks ruined what would have otherwise been the best film in the franchise, and that is a real crime.

These are our picks of the worst characters from the Star Wars franchise - what are yours? Tell us via the comments.