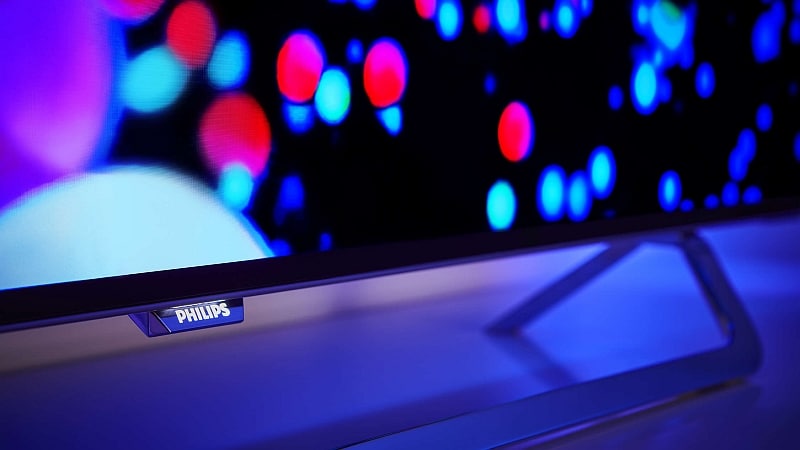 Philips, the company that is known for its wide range of home appliances and lighting products, is set to make a comeback into the Indian television market. The first range of new Philips TVs will hit the Indian shores sometime in mid-December and January. The Amsterdam, Netherlands-headquartered company that exited the television market in the country completely last year after parting ways with Videocon is optimistic about not just making the competition tougher for existing players, but also about becoming one of the top-five players in the market. "In the coming year, we would definitely want to get into the number four spot," Arun Menon, Country Business Head, Philips TV and AV, TPV Technology told Gadgets 360 in New Delhi last week. "Somewhere in 2020, when we want to get stronger to the number four position."

In 2012, Philips created TP Vision, a joint venture with TPV Technology where Phillips had a minority stake of 30 percent, which was entrusted with developing, manufacturing, and marketing Philips-branded TV sets in most markets around the world. However, in India, the Philips brand (for televisions) was licensed to Videocon until last year, when the company decided to shut shop. Seeing this gap, Hong Kong-based TPV signed a deal to bring the Indian market too under its fold.

Menon, who is a former Philips employee and was managing the Philips Audio business at Gibson Innovations — which got the brand license for Philips Audio business around the same time the TV unit was entrusted with TPV — prior to joining TPV in August this year, tells Gadgets 360 that TPV has a complete dedicated R&D team for Philips TVs. "There are four R&D centres globally — two of them are in China, one in Belgium, and one in Bengaluru," he says.

TPV — which is claimed to be the world's largest manufacturer of computer panels — is already leveraging its Bengaluru R&D centre to customise the experience through the new Philips TVs specifically for Indian customers. The company is essentially tweaking colours and the sound experience to meet the requirements of local TV viewers in the country. However, the TV range that is set to enter the country includes all the models that Philips launched in Europe earlier this year. "We've tuned them based on some consumer research that we've done internally and we'll be introducing those as versions for India," states Menon.

Having said that, TPV doesn't have any plans to bring any India-specific TV models in the near future. Similar is the case with its plans towards manufacturing Philips TV sets locally in the country. "Somewhere maybe once we're ready in terms of manufacturing or getting components made locally, then we'll move to completely manufacturing," says Menon. "But assembling is in our plans right now." The company has Dixon Technologies as the partner for domestically assembling Philips TVs in the country. Notably, Dixon also has a partnership with Xiaomi to manufacture its Mi TV range in the country.

The initial range of Philips TVs will include traditional LED TVs and smart TVs based on Philips' in-house Saphi operating system. However, Menon reveals that there are also plans to bring a range of models running Google's Android TV. These will debut sometime in the next year, before the second half, the executive says. However, TPV is in development to host an event next week to showcase all the key offerings it is set to launch in the country. This will include Android TV models as well.

"In today's world where you have e-commerce and offline markets, we are working on how to do we kind of channelise and work with these different markets. But the focus is going to be smart, and Android is going to be one of the stories that we'll work on," says Menon.

The executive tells Gadgets 360 that TPV has the license for YouTube and Netflix to enable true 4K playback of their content on Philips TVs. This will also help the company distinguish its presence from the budget players which, Menon insists, do not offer true 4K HDR playback capabilities on their TV sets.

Further, the Saphi platform that will run on most of mid-range and top-end Philips TV models will come with a Philips Store to let consumers easily download their favourite apps. Menon divulges that popular apps including Amazon Prime Video, Netflix, and YouTube will be available for its native platform right from the launch of the new Philips TV models.

"Some brands still don't have them, but we already would have them now right at the beginning," he says, adding that there are ongoing discussions with the Hotstar team as well.

Smartness on board
Alongside delivering Saphi and Android TV options, most of the Philips TVs in India will come with Bluetooth support to enable consumers to connect accessories like speakers. Some of the premium Philips TV models will also have the Ambilight feature that is designed to create an immersive experience on the wall behind the TV panels by using the LED lights at the back of the TV that light up to complement what's on screen.

There are also plans to take the proprietary feature to the next level by enabling Philips Hue bulbs and lights to adjust the lighting as per the on-screen content. Menon also tells Gadgets 360 that the next year Philips TVs lineup will have voice assistant support to let users not only play their favourite songs or watch their favourite movies but also control Hue lights and adjust the Ambilight feature — all using their voice.

Menon says that TPV is set to use online channels to highlight distinct features such as Ambilight and Hue light integration. "These are difficult to be demonstrated in stores, whereas when we put them online along with a story, we would get an impressive response," he says. "Similarly, some other technology-driven products within our audio and television both would also be showcased through online."

Apart from bringing the existing Philips TV European range to India, TPV plans to roll out future products in India as and when they are unveiled globally. "The April 2019 is when the new range is going to launch globally, and we probably would bring that to India in May or June," says Menon. "That way, our focus would be on how to get the consumer to upgrade to a smart, larger screen size."

Instead of picking any particular screen size at the initial stage, TPV is bringing products from as small size as 24-inch size to the big 65-inch panels as well. Also, Menon highlights that the pricing will be on par with what he calls "A brands" — Samsung, LG, and Sony — though he didn't reveal any particular price details. "We're reviewing internally and before the launch, we'll finalise the pricing," he adds.

Advantage of using the legacy brand
While emerging companies such as Vu and Xiaomi need to establish themselves as players in the TV market, Menon believes that this wouldn't be the case for Philips TVs. "Even though there's been a gap, and Videocon has had issues in the last one year, we still hear from our dealers that consumers are coming and asking for Philips as one of the options apart from the top brands," claims Menon. "So it still has that very strong brand connect with the consumers."

"For any retailer, they would want to have the top brands — LG, Samsung, Sony, and Philips in their stores because consumers come asking for it," he continues. "The challenge in the immediate is going to be to make space for the lineup that we have. Once we crack that and once we start off, which will start in January, the first quarter is when we plan to get that in place. After that, I think it should not be difficult for Philips to come against the top brands."

TPV is working with large retail formats (LFRs) as well as its key retail partners to have enough local presence of the new Philips TVs in the country. Also, it is bringing a robust after-sales service model to sit against the leading competitors. "Because we have this advantage of audio already being there and present, we have currently around 200 service centres across India," says Menon. "We're looking at next year how do we scale it up to 500 — with televisions coming in. During the Videocon time, they had around 400 service centres, but we're looking at scaling it and increasing the service reach immediately next year."

Apart from scaling up the after-sales service network for the new consumers, Menon assures that his team has worked on a mechanism to resolve the problems of existing Philips customers in the country, and even proactively calling them in some cases. "There is process put in place where consumers are being proactively called by the Videocon team, their case is being discussed and in case there is no spare available or repair possible for more than 4 to 6 weeks, a solution is being proposed for the consumer to consider. This is to ensure that the Philips consumer is taken care of," he underlines.

In addition to new non-smart and smart TVs, TPV is set to launch new Philips audio products, having acquired the audio/video licenses from Gibson Innovations after the latter's parent company went bankrupt. Menon says that there are models such as Dolby Atmos soundbar and Dolby 5.1 system that all are set to debut next year. "There is a lot of working happening within audio and televisions both on the roadmap for the next year," he says, adding that the consumers will get to enjoy the benefits of bundling across the two ranges.

The last couple of years have seen the likes of Nokia make strong comebacks, while other vintage brands like BlackBerry and Kodak have experienced less than stellar results. Menon is confident the Philips name and TPV's strong portfolio of products will ensure the company finds a place in the top-four of the Indian TV market.

Editor's note: The bit about after-sales for existing customers has been updated to reflect Philips' current policy at the company's request.

Elon Musk Renames SpaceX's BFR Rocket for Interplanetary Trip
Skype Calling Launched for Alexa Devices Like Amazon Echo: How to Use It