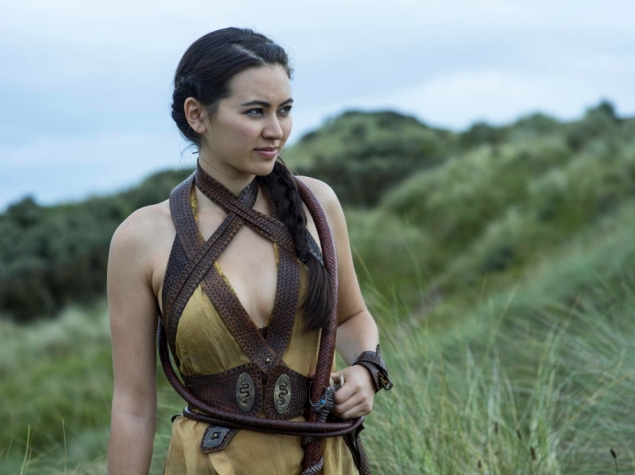 The latest season of Game of Thrones has been a slow burn until this point. We described the last episode, High Sparrow, as slowly getting all the pieces in place. Now, in season 5 episode 4 - Sons of the Harpy - everything erupts and the results aren't good for most of the people involved.

If you missed the episode (6.30AM isn't really convenient for Indian viewers) and really want to know what you missed, we've got you covered, but be warned, this recap is heavy with spoilers so if you plan to watch the episode later today and don't want to know details, then come back later to see if you missed anything.

This episode feels slightly badly paced because it is split between Dorne, King's Landing, and the Wall, with interludes in Winterfell, Volantis, and Mereen. There's a little too much happening, and the ending is a shock even for book readers. However, considering that the season is already almost halfway over and not too much has happened yet, we're just glad to start seeing a payoff for the more deliberate episodes we've had so far. 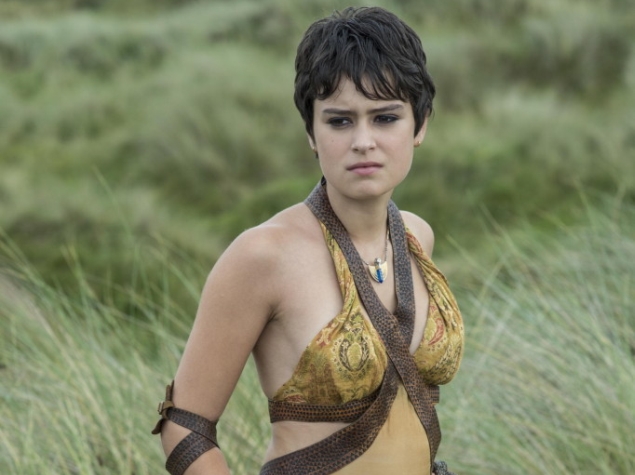 The action starts with a small scene with Jaime Lannister and Bronn on their way to Dorne, and a fun bit of conversation between the two. Bronn has really emerged as one of the most entertaining characters on the show, and his entire role in this season is something that's been made up for television. We're completely outside the books here, and given the show's track record of making you like people and then killing them, we're a little worried about our favourite sellsword.

The episode moves to King's Landing, and Cersei Lannister is about to do something monumentally stupid. She's already seen that her knights and guards don't really impress the sparrows - the religious followers of the High Septon - but these commoners haven't been allowed to carry weapons.

Cersei is feeling vexed by her daughter-in-law Margaery, and decides to strike at her in any way she can - she thinks she's being really smart when she weaponises the Faith and points it like a cannon towards her enemies.

There's a lot of backstory in the books about why this is just an incredibly stupid decision to make, and the show does a good job of showing how quickly this move is going to backfire as well. The mob quickly rampages through the city, with seven pointed star carved into their heads. The bleeding foreheads are just a small taste of the violent that these religious fanatics very quickly implement, smashing through Littlefinger's brothel and even arresting Margaery's brother Loras, for being a known homosexual. 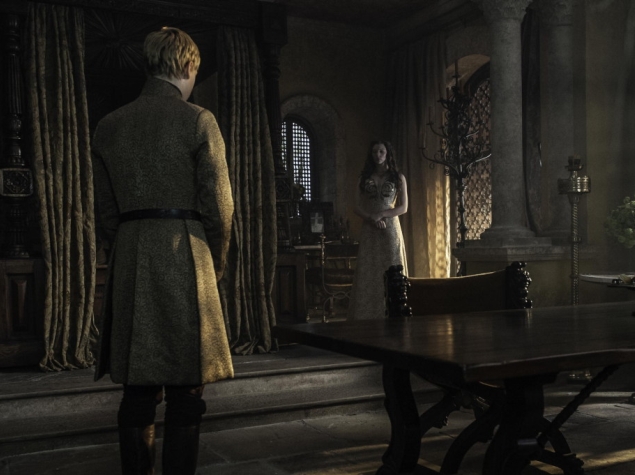 That very quickly puts an end to King Tommen's happy fun times with his queen, as Margaery decides she needs to spend time with her family. Nothing can motivate a boy-king better than that of course, and so Tommen rushes off to the High Sept to see about getting his brother released.

Unfortunately ,the steps are blocked by the faithful, and not wanted to be torn to pieces in a riot, Tommen very sensibly ignores the suggestion to cut a path through the steps and runs home to his mother to get her to help. Cersei of course has no intention of helping and talks circles around Tommen.

The whole sequence is very effective, and does a good job of showing us how young and helpless Tommen really is. His brother Joffery was a crazy psychotic monster, of course, but he was also strong enough to impose his will on the people and make them follow along with his ridiculous orders. Tommen, on the other hand, is just a slightly lost boy, and he's not having a good time now. 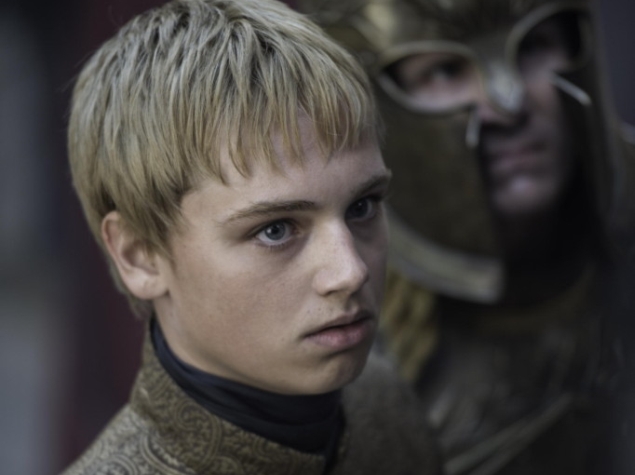 Meanwhile, two big things happen at the Wall. For one thing, we get to see the human side of King Stannis finally. Book readers are sharply divided on whether Stannis is a hero or a monster, but the show has only shown his negative qualities so far.

We've seen Davos "Onion Knight" Seaworth support Stannis of course, but even that's never really explained on the show. In this episode though, we see Stannis talking to his daughter Shireen. She's been afflicted with a disease called Greyscale, and is largely avoided or treated like a freak by other people.

Stannis has a long conversation with her, and talks about her childhood. He shows his human side and it's a really important scene. There's no conversation like this in the books, but the episode definitely needed it to show us a little more about Stannis and what really drives him, instead of a misplaced sense of justice. 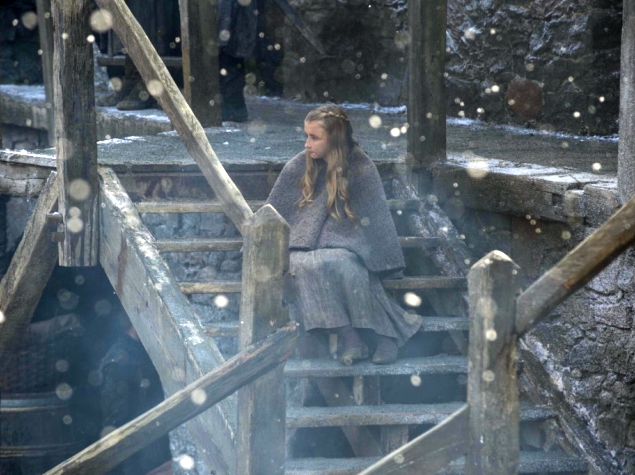 At the same time, Melisandre talks to Jon Snow about her God the Lord of Light, and puts the moves on Jon Snow, and before you know it, she's naked on his lap. Jon nearly breaks his vows for a second time, but manages to stop himself. As she's about to leave the room though, Melisandre says, "you know nothing, Jon Snow."

With the comparative religion lesson and make out session both cut short, you know the Lord Commander of the Night's Watch is going to do something monumentally stupid soon, but the question is, what?

Meanwhile in Winterfell, we see Sansa Stark in the crypts of the castle, standing in front of a statue of her aunt Lyanna. We actually saw this statue in the very first episode of the show - Robert Baratheon, the King (the only one at the time!), had gone to the crypt to pay his respects to Lyanna. Robert had been in love with her and was supposed to marry her, but she was kidnapped by King Aerys Targaryen's son Rhaegar. This kidnapping kicked off Robert's rebellion, which ended with the overthrow of the Targaryen's and the establishment of Robert as King.

Sansa and Littlefinger have a short conversation about this bit of history too, and then he's leaving her as he travels South to King's Landing. Sansa meanwhile is supposed to marry Ramsay Bolton. This is not going to end well for Sansa, if anything we've seen about the Boltons so far is a clue. Ask Theon Greyjoy if you like. 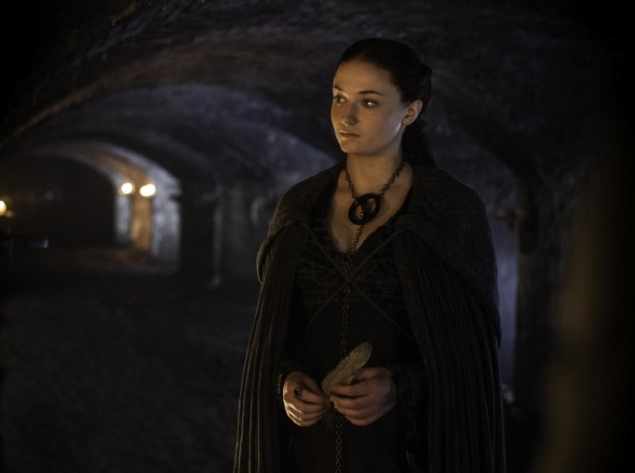 As we've mentioned in earlier recaps, this entire storyline is also new for the show. In the books, it's one of Sansa's childhood friends - Jeyne Poole - who is married to Ramsay, and then repeatedly tortured. Jeyne's story is one of the most unfortunate in the books, and it looks like Sansa is headed for the same fate. We really hope that the show's creators go in a slightly different direction though, because the show's version of Sansa has become a lot more interesting - and observant - than she was at this point in the books.

By this point, there's already a lot that's happened in the episode, but the next few scenes really get into the action. We start off with Jaime and Bronn playing commando in Dorne. They're quickly spotted, of course, by a group of Dornish horsemen who believe in attacking first, and asking questions later. Of course, these guys are just cannon fodder and Bronn makes short work of them. Even Jaime gets one kill in, despite being short a hand.

Jaime and Bronn are going to be in so much trouble for this, and since this entire misadventure is one that's not happened in the books, you know it's going to turn out badly for at least one of them.

We also got to see the Sand Snakes in Dorne. These are the illegitimate daughter's of Oberyn "my head is porridge now" Martell, and they're all shown here as fighters down to the last. Oberyn's paramour Ellaria comes to the Snakes and tells them about how the Prince of Dorne isn't ready to go to war. 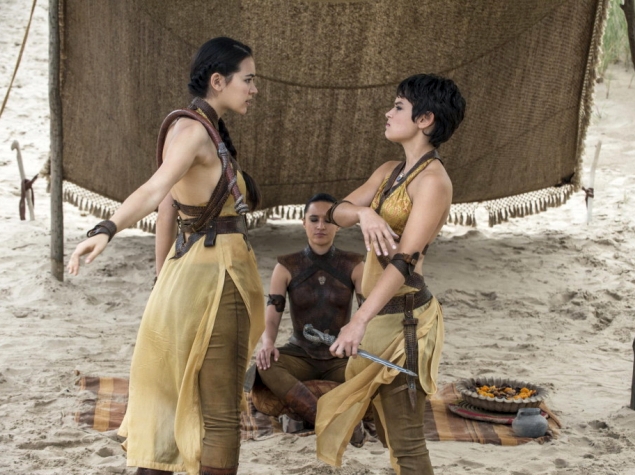 The Sand Snakes have some news for her though - they have the captain of the ship Jaime came to Dorne on, and know that he's there to try and rescue his niece/ daughter Myrcella.

Ellaria wants to know if the Sand Snakes will help her, and all three promise to do whatever they can. Oberyn's eldest daughter even gives what was a very moving speech about why she is ready to go to war, before killing the ship's captain with her spear.

As a book reader, the first thought that comes into your head is going to be, "Oh, they kept the speech! That's great!" And then you'll think, "Good God this is cheesy and stupid." The fact is that the books are the books and the show is the show, and that speech, as it was written, worked much better in the context of the book.

Another complaint here is that the three Sand Snakes are barely differentiated. In the book, the characters and their motivations were wildly different, even though they did all want revenge for their father. This isn't a book reader complaining about how something has changed - Ellaria's character has changed completely for the show, and she's as bloodthirsty as the Sand Snakes in the show. But looking at the three women in this episode at least, the only real difference between the characters seems to be their choice of weapon, which is a disappointment.

After Dorne, we see Tyrion all too briefly. He's being ferried as a prison of Jorah Mormont, who plans to take him as a peace offering for Danaerys in Mereen. Tyrion of course is relieved because that's where he was headed all along, but as usual, can't keep his mouth shut even if his life depended upon it. Mormont isn't as patient as some of the people Tyrion has spent time with, and just wallops him in the face.

The action moves to Mereen and Danaerys is having a small council in court. Barristan Selmy has a lighthearted moment with Danaerys, and then leaves. It's exactly the sort of thing that ends badly, and that's just what happens here. 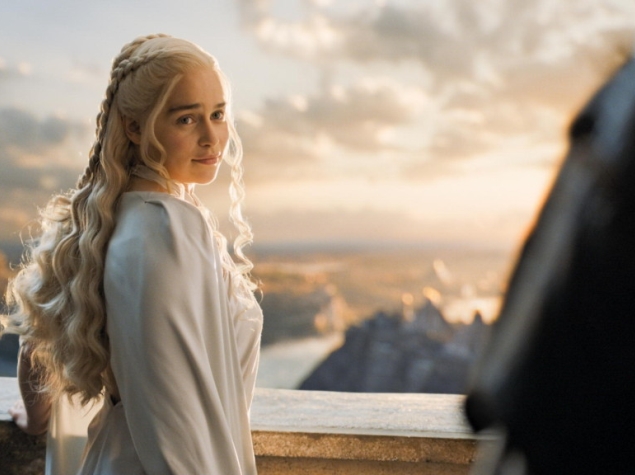 Some of the Sons of the Harpy - the Mereenese insurgents who are fighting against Danerys' conquest - kill a man and then as her Unsullied soldiers approach, flee into a tunnel. The Unsullied rush in after them, only to realise that it was a trap.

Sons of the Harpy pour in from all sides and start attacking the soldiers. The Unsullied fight bravely but they're quickly overrun. One of the soldiers gets his helmet knocked off, and we see that it's Grey Worm, the leader of the Unsullied. He's stabbed, and about to go down, when Barristan shows up and starts hacking and slashing his way through dozens of Harpies.

It's an excellent scene - you can see that our two heroes aren't going to survive this, Game of Thrones isn't an action movie - the two men take down a huge number of their enemies before finally collapsing, and that's how the episode ends, with the two dead or dying surrounded by a pile of corpses.

It's a powerful scene, and wonderfully shot. Watching it, we felt like shouting at the screen. In the books, both Grey Worm and Barristan are still around, and are defending Mereen from an army of attackers while Danaerys has gone missing, kidnapped by her dragon Drogon.

The show is firmly in uncharted territory by now, and it's hard to predict what will come next. We're hoping that at least some of the characters who were put in peril this episode make it through the season, though with Game of Thrones, nothing is certain.

Did you watch the episode already, and if so, what was your favourite moment? Tell us via the comments.

Further reading: Game of Thrones, GoT, HBO, Recap, Sons of the Harpy