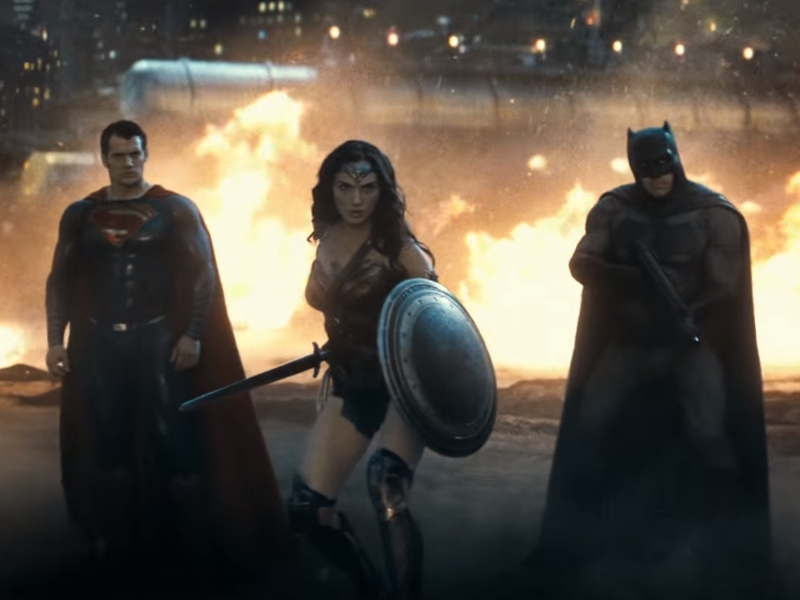 The newest trailer for Batman v Superman: Dawn of Justice is now out, and you can see the whole thing below. The movie will be releasing in March 2016, just a couple of months before Captain America: Civil War, which is releasing on May 2016. Both movies feature superhero fights and team-ups, and it could frankly lead to a case of superhero fatigue.

Batman, Superman, and Wonder Woman have been featured heavily in the trailers, and Flash and Aquaman are also supposed to be in the film; Civil War meanwhile has enough superheroes listed that we might as well call it Avengers.

The Batman v Superman trailer starts off with Clark Kent facing off against Bruce Wayne in a battle of words, and then Lex Luthor shows up and tells Batman, "You don't want to pick a fight with that guy," pointing at Superman. There are a lot of scenes where Batman and Superman seem to be fighting, but then Lex Luthor appears to release a giant monster in some sort of science gone wrong disaster, and suddenly the two heroes are fighting side by side, with Wonder Woman jumping in from nowhere to protect them from what looks like a nuclear blast, thanks to her tiny shield.

That sentence pretty much sums up how predictable this movie is looking to be - good guys fight and misunderstand each other; no real resolution is accomplished but then the bad guys reveal themselves and are even worse; and then it's happily ever after.

Except that Batman v Superman looked to be much more interesting when it was promising to actually address the devastation that Superman caused in Man of Steel. The collateral damage of his fight with General Zod was shown very clearly, and we're clearly supposed to see that it's a bad thing.

Except, at the end of the trailer, the villain (Doomsday?) fires some sort of laser blast thing, which causes a wave of devastation, so that our heroes can stand in the midst of rubble the way Snyder loves, and everyone seems okay with that, including Batman.

Batman v Superman is based on an interesting premise, and the little we've seen of the movie through trailers and teasers looks great so far. But as of now at least, it's making very little sense, and that's something that we're worried will be the case for the final product as well. Civil War also looks formulaic right now to be honest, and we're hoping that we'll get some more films with a smaller scale focus like Ant-Man soon.