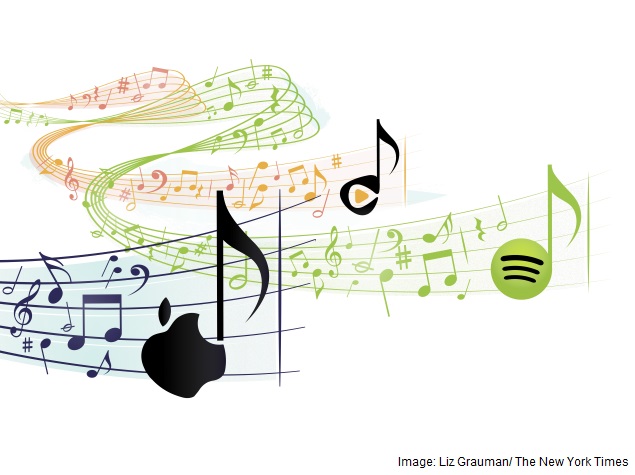 When it comes to streaming music, is Apple arriving too late or right on time?

The music industry is pondering that question as Apple prepares for an event in San Francisco on Monday at which it is expected to announce the most sweeping changes to its music offerings since it introduced the iTunes store 12 years ago and revolutionized the way songs were bought and sold.

The new features will include a subscription streaming plan to compete with Spotify, as well as updates to the iTunes Radio service that will go up against both Pandora and traditional broadcasters, according to people briefed on the company's plans, who spoke on condition of anonymity.

With these changes, Apple is embracing streaming music, which has grown quickly over the past few years even as download sales have dropped.

Yet Apple will be entering a market where others, including Spotify, Deezer and Rhapsody, have already taken root among some of the most active music consumers. Spotify, for example, the largest streaming service, started in 2008 and has signed up 60 million users around the world, 15 million of whom pay for monthly subscriptions.

At the same time, analysts say, Apple's sheer size and reach - it has sold more than 700 million iPhones alone - gives the company an advantage over every other player and may allow it to dominate a fast-growing market.

"Apple is not too late, but they are certainly playing catch-up," said Jan Dawson, an independent technology analyst for Jackdaw Research. "It's a crowded market, and they will have to find ways to set themselves apart."

Apple is said to still be haggling with record labels and music publishers over licensing terms, according to executives briefed on the talks. If those talks fail, Apple's announcement could potentially be changed or even postponed, these executives said, although they added that Apple has often completed such deals at the last minute.

Neither Apple nor the major record labels would comment.

For the music companies, the sticking points include how much Apple should pay with new features like far more extensive radio programming and a promotional tier in which artists can upload free content for their fans. The subscription streaming service will cost $10 a month, with free trials of perhaps two or three months, according to people briefed on the talks. A social networking component is also expected.

"They don't want to launch just a Spotify competitor," said one major-label executive, who spoke on condition of anonymity in order to discuss Apple candidly. "They want to launch an all-singing, all-dancing music experience."

Apple's service is expected to make downloads, streaming and radio all available in a redesigned version of Apple's music app. (A version of it is also expected to be available on Google's competing mobile platform, Android.)

In the app, customers would have access to their existing music libraries and would also be able to sign up for the new subscription service. That combination would give users choice but has left music executives bracing for financial turbulence: Sales of downloads - still one of the labels' biggest sources of income - will inevitably drop when customers switch to subscriptions. Download sales around the world fell 8 percent in 2014 from the year before, while subscription services were up 39 percent in the same period, according to the International Federation of the Phonographic Industry, a trade group.

The radio features are said to include both a revamped version of iTunes Radio - the Pandora-like service that Apple introduced in 2013 - and a new set of "linear" programming that would more closely resemble a traditional radio station. Apple has signed up a range of music celebrities, like Drake and Pharrell Williams, to create playlists and host programs, and the company has also hired radio professionals like Zane Lowe, a former BBC DJ and interviewer.

According to music executives, Apple is negotiating for separate licenses for iTunes Radio and its new radio service, which is code-named "Beats One." Separate licenses may point to highly different plans for the two radio services, these executives said. Among those planning the new service are Jimmy Iovine and Trent Reznor, who joined Apple through its $3 billion purchase last year of Beats and report to Eddy Cue, Apple's longtime iTunes boss.

While music was a crucial part of Apple's resurgence under Steve Jobs, music sales have become an ever smaller part of the company's overall business. Analysts said that, even if the streaming service is successful, music is a marginal financial opportunity for the company. Last year music subscriptions around the world generated $1.6 billion in wholesale revenue for the recording industry; by comparison, Apple reported nearly $183 billion in total sales for its most recent fiscal year, which ended in September.

"In the grand scheme of Apple's financials, a streaming service is inevitably going to be a rounding error," said Toni Sacconaghi, an analyst at Sanford C. Bernstein.

But within the music world, Apple's arrival is widely seen as the force that could take streaming into the mainstream. While the use of streaming services has grown quickly, music and technology executives alike have frequently complained that services like Spotify have been slow to take off with ordinary consumers.

In the United States, only 7.7 million people paid for streaming music subscriptions last year, according to the Recording Industry Association of America. That lags the performance of single companies like Sirius XM satellite radio, which has 27.7 million customers in the United States, and Netflix, which has 40.3 million paying U.S. subscribers.

"One of the biggest issues for the streaming industry is that consumer understanding is still limited," said Hans-Holger Albrecht, the chief executive of Deezer, which has some 6 million paying subscribers around the world. "When a company like Apple moves into this sector, it starts to educate consumers. It will lift the market potential."

A slam-dunk success is by no means guaranteed for Apple, whose other music projects in recent years have turned in mixed results. iTunes Radio remains a distant competitor to Pandora, and Ping, a social network connected to iTunes, was introduced in 2010 but withdrawn two years later.

Still, Dawson, the Jackdaw analyst, said that given Apple's enormous customer base, its music service could "easily" sign up 100 million subscribers over the next few years.

"They have the demographic that is most likely to pay for music pretty well locked up," Dawson said.