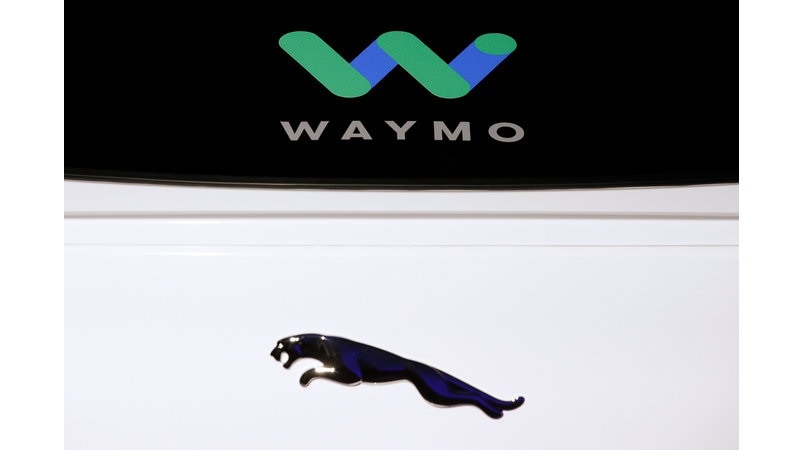 Waymo will include up to 20,000 Jaguar I-PACE electric vehicles in its upcoming autonomous fleet as part of a long-term partnership between Alphabet's self-driving unit and Jaguar Land Rover Automotive, the two companies said on Tuesday.

"You will see increasing diversity in our fleet mix as we go forward," Waymo Chief Executive John Krafcik told Reuters on Tuesday. Waymo has previously said it is discussing a collaboration with Honda Motor Co.

The partnership, announced ahead of the New York International Auto Show, is another step in Waymo's plan to roll out a robotaxi service in the United States.

Waymo is competing with rivals General Motors Co and Uber Technologies to deploy such vehicles for the masses.

Testing of the vehicles will begin this year and they will be incorporated into the fleet starting in 2020, Waymo Chief Executive John Krafcik said. By 2022, there could be as many as 20,000 electric vehicles able to conduct about 1 million trips a day.

Jaguar's I-PACE launched this month. The SUV is the first battery-powered vehicle for the brand, which is owned by India's Tata Motors Ltd, underscoring the convergence of electrification and automation.

Waymo currently tests its self-driving system on Chrysler Pacifica minivans built by Fiat Chrysler. The company has plans to roll out a ride service to the public in the Phoenix, Arizona area in coming months, with plans to later launch it more widely.

Waymo has been working on self-driving cars since 2009 and has driven over 5 million miles on public roads. Last month, it released a video designed to help potential passengers envision what it is like to ride inside an autonomous vehicle.

The push comes as Waymo and automakers are heavily lobbying Congress to adopting sweeping legislation to speed the deployment of autonomous vehicles without human controls. But that legislation is on hold amid questions over the safety of self-driving vehicles following the March 18 death of a pedestrian struck by a self-driving Uber test vehicle in Arizona. On Saturday, Krafcik said Waymo's system would have seen and avoided the pedestrian.

Waymo is moving ahead with its plans to launch a driverless service, Krafcik said. He said the company, which has been working on the technology for nine years, is confident that "what we're putting on the road is safe technology."

Uber announced last year that it planned to buy up to 24,000 vehicles from Volvo, owned by China's Geely Automobile Holdings, in a non-exclusive deal from 2019 to 2021. Companies planning to launch driverless car services generally supplement existing hardware on vehicles supplied by automakers with their own self-driving technology.

Toyota Motor Corp said last week it was temporarily pausing autonomous vehicle testing following the Uber crash on US public roads to help its test drivers, who could be experiencing "an emotional effect" from the incident.

Bill Fay, senior vice president of automotive operations at Toyota North America, said Tuesday in an interview at an event in New York he did not know long the pause would last. He said the company plans a "gradual" safe approach to self-driving vehicles.

"We all have to build some trust into the technology and obviously this would be a little bit of a setback," Fay said.

General Motors North America President Alan Batey told reporters in Monday in New York that the automaker's "development process will continue." The Detroit automaker wants US regulators to approve the use of self-driving cars without human controls for use next year in ride-sharing fleets. He said the Uber death was very sad "as is the deaths we have every day on the road from human errors and human behaviour."